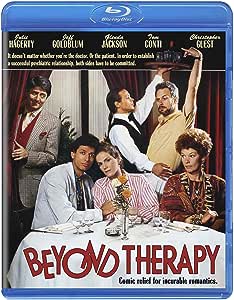 Gary F. Taylor
5つ星のうち5.0 Just What The Doctor Ordered
2002年4月19日 - (Amazon.com)
Amazonで購入
Christopher Durang's off-Broadway play BEYOND THERAPY was a triumph, and Durang himself worked with director Robert Altman to bring it to the screen. The result is a truly remarkable film--beautifully played by a first-rate cast, quick paced, provocative, romantic, and very, very funny.
Unlike some Altman films, BEYOND THERAPY offers a traditional storyline. When Prudence and Bruce (Julie Hagerty and Jeff Goldblum) meet for a blind date the result is disasterous--not surprising, when Bruce casually notes that he is bisexual and living with lover Bob (Christopher Guest.) Prudence and Bruce rush back to their therapists (Tom Conti and Glenda Jackson, respectively) for advice... but their therapists are nuttier than they are, and soon they, Bob, Bob's mother Zizi (Genevieve Page), and the entire waitstaff of a French restaurant are dragged into the fray.
Durang's adaptation of his script is absolutely hilarious, and so many memorable lines ("My mother is NOT a transvestite!") bounce through the film that the effect--particularly when coupled with Altman's "wall of sound" audio style--is absolutely dizzying; the sound design is also memorable for the constant car crashes and china shattering that occurs in the background, a metaphor for collision of characters happening before our eyes. The entire cast is absolutely first rate (Hagerty, Goldblum, and Guest have never been better), and Altman guides them with a very sure hand.
Altman's vision always divides viewers: you either like his films or you do not. Although BEYOND THERAPY offers a relatively small cast in a cohesive story, it is actually one of Altman's most visually and aurally kaliediscopic films, and it is unlikely to convert those who find his style confusing and frustrating. But that said, this is a must-have film for any Altman fan, a truly enjoyable romantic comedy with a razor sharp script and a joyous style. A great shame that this VHS is out of print and there is no DVD release! Strongly, strongly recommended.

Forth Wright
5つ星のうち4.0 Most probably seen on indy stations or VHS/DVD
2007年3月12日 - (Amazon.com)
Amazonで購入
This lesser known and probably watched Christopher Guest (Spinal Tap, Waiting for Guffman, A Mighty Wind, Best in Show...), in a supporting role, with stars Julie Hagarty, a respected British Member of Parliament and Jeff Goldblum is a camp fest (that means funny!). Every neurosis and phobia is spotlighted in a tale revolving on a woman's deep denial and a man's denial of self and other relationships. The initial meeting of Bruce's new girlfriend (Prudence) and his live-in boyfriend/roommate (Bob) will have you rolling on the floor with hilarious laughter.

You'll be confused from the opening scene to the last credit but you'll be laughing so much at the lunancy (to borrow a phrase) that it will hardly be noticed.

Is it Paris, or NYC?

T. Davies
5つ星のうち2.0 Decent play - plodding movie
2007年5月11日 - (Amazon.com)
Amazonで購入
Ok, ok. I read reviews thru IMDB, etc which warned me that the '80s film version of this strange play was plodding, boring, plodding and plodding. But reviews aren't always right, right? And maybe my tastes are different (read: more sophisticated, of course) than the reviewers.

Uh, no. Reviews were spot on. This version of a wonderfully twisted play is dull, boring and boring. And boring, too. Julie Haggerty's usual characterization of an indecisive, insecure, ditzy woman is tolerable for about 15 minutes. Jeff Goldblum does some interesting things, but gets tiring by movie's half.

An interesting supporting cast adds some flavor, but ultimately fails. The slapstick moments were reminiscent of Noises Off!...another play that made a WONderful transition to film with John Ritter and Carol Burnett.

If your local theatre is performing the play, see it there instead. This play can be interpreted a million ways, and it's fun seeing what each acting company/director will do with it. But as for the movie version - SKIP IT - it's a crazy, flawed piece of writing that was not enhanced in film.
続きを読む
1人のお客様がこれが役に立ったと考えています
レビュー を日本語に翻訳する

Graeme Brown
5つ星のうち3.0 Not Necessarly for Everyone
2008年2月25日 - (Amazon.com)
Amazonで購入
This may not be the best film in the history of cinema, but it is one of my alltime favorites. You get the feeling that much of the dialog was mafe up as it went along and like other Robert Altman films there are frequently several people talking at once and it can be a bit difficult to follow. It doesen't matter, the whole plot is crazy start to finish and charactors are all over the top. This is not your typical romantic comedy, watch with an open mind and you may just love this!!
続きを読む
2人のお客様がこれが役に立ったと考えています
レビュー を日本語に翻訳する
Amazon.comのカスタマーレビューを見る(22) 5つ星のうち3.2
Amazonプライム会員ならお急ぎ便、日時指定便が使い放題
さらに、映画もTV番組も見放題。200万曲が聴き放題 。クラウドに好きなだけ写真も保存可能。
> プライムを無料で試す