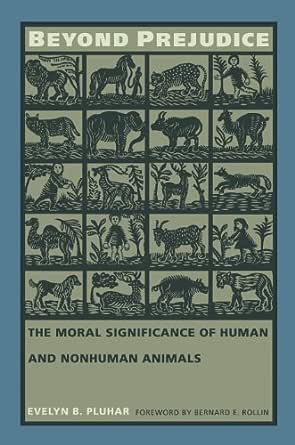 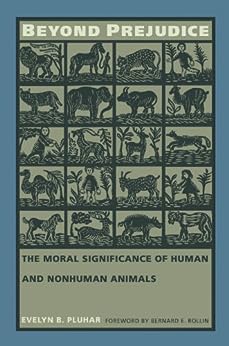 Beyond Prejudice: The Moral Significance of Human and Nonhuman Animals (English Edition) Kindle版

In Beyond Prejudice, Evelyn B. Pluhar defends the view that any sentient conative being—one capable of caring about what happens to him or herself—is morally significant, a view that supports the moral status and rights of many nonhuman animals. Confronting traditional and contemporary philosophical arguments, she offers in clear and accessible fashion a thorough examination of theories of moral significance while decisively demonstrating the flaws in the arguments of those who would avoid attributing moral rights to nonhumans.
Exposing the traditional view—which restricts the moral realm to autonomous, fully fledged "persons"—as having horrific implications for the treatment of many humans, Pluhar goes on to argue positively that sentient individuals of any species are no less morally significant than the most automomous human. Her position provides the ultimate justification that is missing from previous defenses of the moral status of nonhuman animals. In the process of advancing her position, Pluhar discusses the implications of determining moral significance for children and "abnormal" humans as well as its relevance to population policies, the raising of animals for food or product testing, decisions on hunting and euthanasia, and the treatment of companion animals. In addition, the author scrutinizes recent assertions by environmental ethicists that all living things or that natural objects and ecosystems be considered highly morally significant. This powerful book of moral theory challenges all defenders of the moral status quo—which decrees that animals decidedly do not count—to reevaluate their convictions.

"This book joins the illustrious company of Peter Singer's Animal Liberation and Tom Regan's The Case for Animal Rights as one of the most important books of the last two decades dedicated to changing our prejudiced attitudes and practices toward non-human animals."--Owen Flanagan, Duke University

"Evelyn Pluhar has written an important book that discusses key issues in developing moral thought about our treatment of non-human animals. Arguing that past writing in the area has failed to justify the moral significance of non-humans, Pluhar offers an original contribution designed to provide that justification. Her scholarship is exacting; her writing style lively, lucid, and accessible. There can be no doubt that Beyond Prejudice will stimulate much important debate about the topic of the rights of nonhumans."--Gary L. Francione, Rutgers University, School of Law