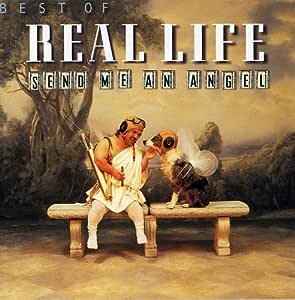 Best of Real Life: Send Me An Angel ベストオブ, インポート, from US

ScottPaul ScottPaul
5つ星のうち4.0 Send Me An Angel with 'Openhearted' and the few 90s to make this collection worth the heavenly 5 Stars it should be already!
2015年6月11日に英国でレビュー済み
Amazonで購入
Little-known new-wave synth-pop/rock based outfit from Australia I only found my chance scouring Youtube, and like the more folk-like, laid-back and wordy The Go-Betweens before them, weren't allowed to bother the UK at all with a sound so easily fitting in with the great pop of 1983. Certainly killer tune 'Send Me An Angel' is as good as anything out by anybody back then, as would a later song in 1985 like 'One Blind Love', but the UK and US were very adamantly opposed to anything via any other country but their own back then-unless, for the UK, it was American, yet that nebver made them do us any favours. America actually bothered with Real Life for their first album and two biggest singles-the other being 'Catch Me (I'm Falling)' featured on here in its long 12" version only, which is the sort of thing they'd generally only ever do if you were a UK act they bothered with.

This is definitely an essential record for anyone with a love for proper 80s sound, and who wish to see beyond many of the overrated or joke muppets giving the 80s a bad name and nowhere near representative of the best decade of music it actually was, and the illustrious engaging synth work powering many of these diamonds-'No Shame', 'Let's Fall In Love' and 'Send Me An Angel' (with its heavenly female operatics) screams class and playability. Lead guitarist and vocalist David Sterry's can be heard improving immensely from the earliest tracks like 'Always' until something truly dramatic and awesome like 'Face To Face' and eerie and tuneful high-point 'One Blind Love'-another addition to the Most Underrated and Ignored 80s Singles Of All Time from yet another group. 'The Hammer Of Love' could well have been an inspiration for later 80s techno group Information Society, themselves highly versed in signifying British bands with their sound, and of course, ABBA. They're not averse to a heavy political statement either, like with the intriguing "risk" song 'Babies'.

This compilation is from 1989 so sadly their three 90s songs can't possibly be on it, but what is the biggest problem is not actually its years bias to the re-released 'Send Me An Angel' (it holds only both edited and longer 1989 versions and not the original album's 1983 one), but the fact it's actually missing a single-just one single-'Openhearted' the all-important oriental-sounding tune released between their two big early singles! Astounding rudeness, not least cos debut single 'Always' is their most embarrassingly twee, old-fashioned and weakly sung thing ever issued for their airwaved, and flopped accordingly. It's not unplayable, but it's criminal to include this over 'Openhearted' if they can't be on together! And why not?! The CD has more than enough space, and it certainly doesn't need both 'Send Me An Angels', yet would still have enough spce for both them too. As it is I prefer the longer one, and while I can understand Real Lifers or fans of the original's gripe about the 1983 version not being here, I've by now decided I don't care, as both 1983 and 1989 versions are pretty much identical-there's no jarring extra club sound or different mix to ruin things, it's just the clapping in the '83 original on the chorus has been replaced-barely a big deal when a four minute space for a blatantly missing follow-up single to this beautiful hit isn't even on here! Who greenlighted this releaser? We need another-and it should add the 90s ones too. Unlike The Go-Betweens, Real Life have a far shorter doscography, splitting early and not coming back together for ages and barely releasing anything since when they did.

Real Life it may be as far as shafting the music-buying public is by the big labels, but to just leave just ONE single off a collection is miserly, miserable, wounding to the artist and to us, though it isn't exactly 'Openhearted' of anyone else on here to mention the fact that 'Openhearted' from this collection id Open-parted.
続きを読む
役に立った
フィードバックを送信中...
フィードバックをお寄せいただきありがとうございます。
申し訳ありませんが、お客様の投票の記録に失敗しました。もう一度試してください。
違反を報告
レビュー を日本語に翻訳する

R. P. Spretnak
5つ星のうち3.0 The problem? The best of Real Life is only two songs.
2019年1月31日にアメリカ合衆国でレビュー済み
Amazonで購入
The biggest problem with this CD is that the best of Real Life, let's be real here, consists only of two songs: "Send Me an Angel" and "Catch Me I'm Falling." That said, those are two extraordinary, absolutely awesome, must-have songs. I am not criticizing this band for a perceived shortcoming in the number of great songs. Quite the contrary, I am saluting them for their extraordinary talent in producing these two absolute gems.

But after those two songs? Filler. I like "Always." It's a pleasant enough pop tune, but it's a step down. And things fall off far from there. However, given that Real Life's LP "Heartland," on which these two songs first appeared (at least in the U.S. market, not sure about their catalog in the homeland of Australia) is unavailable in CD format, this is how you get those two songs if you want to own them in a tangible format.

Blind Dad
5つ星のうち5.0 Real Life, real good
2017年6月8日にアメリカ合衆国でレビュー済み
Amazonで購入
I like this Amazon service; you make the order and then the CD is actually individually created for you which is why it takes longer than a couple days to arrive. Or at least that's how I understand the process. Anyway, the CD contained exactly what I wanted - a collection of Real Life including the one hit wonder "Send Me An Angel". I've bought a few CD's this way and they come well packaged and seem to be of high quality. The music format - WAV - is high fidelity and sounds great on my headphone amp, DAC and fancy-schmancy headphones.
続きを読む
役に立った
フィードバックを送信中...
フィードバックをお寄せいただきありがとうございます。
申し訳ありませんが、お客様の投票の記録に失敗しました。もう一度試してください。
違反を報告
レビュー を日本語に翻訳する

Victor doom
5つ星のうち5.0 Best of Real Life: Send me an angel
2010年3月4日にアメリカ合衆国でレビュー済み
Amazonで購入
I decided to buy this CD for different reasons.
I listened to "Send me an angel" for the first time on the radio in 1985, I recorded it on a tape but I wasn't able to find out the name of the artist; the title I supposed to be "Send me an angel".
After a long time, about 1995, I heard it again on a local radio that played songs of the eighties late in the evening, but I still didn't know the name of the artist, until this song was reissued in a compilation containing some forgotten hits of the eighties, and I discovered "Send me an angel" was by Real Life, a band I really didn't know. This was the original version of the year 1983.
Meantime, there was another great song I listened to in 1986 on the radio "One blind love".
I recorded this song on tape because I found it awesome, really unforgettable, incredibly romantic, but I didn't know neither the title, nor the name of the artist.
I knew the Amazon site in the year 2001, when I started to use computer and internet. I tried to discover the title of this song, paying attention to the words I had been able to transcribe on a piece of paper, I browsed in the many names of artists available on Amazon list to see if a song with those words had been written by them.
Finally, it came to my mind that the style of music, the singer, the arrangements of the song "Send me an angel" were very similar to the song whose title was still unknown to me.
Listening to the samples of this CD, I casually found the unknown title, "One Blind love", a title I had been looking for, for more than 20 years. Bingo!!!!
As you can imagine, this is my favourite song and that's why I bought this CD! I listened to the other songs too and I really liked them. Regarding "Send me an angel", the versions offered are good, but I'd have preferred to find the original 1983 version: that's the best.
This is a very brilliant album by Real Life. Here is my personal hit parade:
1 One blind love ; 2 Send me an angel; 3 The hammer of love; 5Always; 4 Face to face.
続きを読む
2人のお客様がこれが役に立ったと考えています
役に立った
フィードバックを送信中...
フィードバックをお寄せいただきありがとうございます。
申し訳ありませんが、お客様の投票の記録に失敗しました。もう一度試してください。
違反を報告
レビュー を日本語に翻訳する

Roberta Bullock
5つ星のうち5.0 No issues with the item a good company to work with
2019年5月30日にアメリカ合衆国でレビュー済み
Amazonで購入
A great great cd with my favorite song from the eighties send me an Angel a classic album cd to own thank you
続きを読む
役に立った
フィードバックを送信中...
フィードバックをお寄せいただきありがとうございます。
申し訳ありませんが、お客様の投票の記録に失敗しました。もう一度試してください。
違反を報告
レビュー を日本語に翻訳する