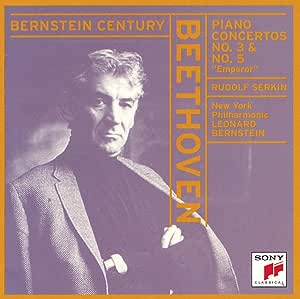 There are two kinds of collaboration possible between conductor and soloist. The first kind happens when both completely agree about the way the music ought to go because they share the same approach. The second type features two artists of very different temperament, and it's more dangerous but also potentially more exciting. The danger arises when the two performers fail to agree on anything, and each goes his own merry way. But when they really stimulate each other a new sort of musical fusion results, and then just listen to the sparks fly! That's exactly what happens here. Bernstein's passionate immediacy of response seems to feed onSerkin's disciplined severity, and the result is Beethoven for the record books. Let it rip! --David Hurwitz

Andrew R. Barnard
5つ星のうち5.0 Serkin and Bernstein form an indispensable partnership in Beethoven
2014年5月9日にアメリカ合衆国でレビュー済み
Amazonで購入
It's so hard to find great Beethoven these days that when I listen to this recording from a half-century ago, I have to shake off disbelief. The paring of Rudolf Serkin and Leonard Bernstein was magisterial in this music. Somewhere along the line, it become taboo to play Beethoven as a full-blooded romantic, with virtually all musicians settling for a stylish alternative in the name of being more "authentic". But Serkin and Bernstein didn't have such qualms, and the natural vivacity of their interpretations speak for themselves. Nothing sounds overblown or stiff here, as detractors might want to claim. Actually, one picks up a genial quality that enables the interpretation to have a lilting quality, even while everything is fundamentally grand in scope.

It all sounds so deceptively simple. You'd think this kind of fluid inspiration would be heard more often; there's nothing necessarily complicated about it, certainly nothing cerebral. Yet these two geniuses devote themselves to playing the music where their rivals labor thinking about it. It would be impossible to overstate the naturalness both Serkin and Bernstein have, even as they reveal their distinctive personalities. One listen to Serkin's captivating tone and control reduces recordings from more than a few modern rivals to flashy finger-work. Serkin has the imagination to mold phrases with vision and a constant feeling of freshness. I find the conviction irreplaceable and deeply moving.

Bernstein could hardly have been a better collaborator for Serkin, and when you hear him start the 3rd Concerto with unabashed freedom and rigor, there's a temptation to start cheering. As musically balanced as it is, we leave behind portraits of Beethoven as a junior Haydn in favor of drama and authority. And hearing Bernstein lending his powers to make the "Emperor" sound adventurous without being somber is a thrilling experience in itself. The New York Phil plays beyond compare, their virtuosity being excelled only by their intrinsic alertness and immediacy. All told, a success from every angle in both concertos.

I try to be balanced in my reviews without giving way to gushing, but if I've crossed the line here, I truly don't care. With so much vitality bursting the seams, there's good reason for celebration. Considering the cheap asking price for this disc, you'd be a loser not to plump for it.
続きを読む
9人のお客様がこれが役に立ったと考えています
違反を報告
レビュー を日本語に翻訳する

J. Tullis
5つ星のうち5.0 Excellent
2009年10月20日にアメリカ合衆国でレビュー済み
Amazonで購入
Old, so maybe the sound quality isn't quite up to today's standards. But it's a vigorous, lively rendition of two of Beethoven's finest. I actually prefer this recording to several newer versions that just don't have the "oomph" of the Bernstein-Serkin work.
続きを読む
2人のお客様がこれが役に立ったと考えています
違反を報告
レビュー を日本語に翻訳する