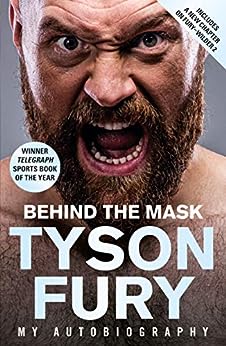 Behind the Mask: My Autobiography – Winner of the 2020 Sports Book of the Year (English Edition) Kindle版

Speaking candidly about his struggles with mental health, this is Tyson Fury as you've never seen him before. (Daily Telegraph)

Fury delivers on his Behind The Mask promise. Beneath the rowdy showmanship is a gifted athlete with bottomless reservoirs of determination and a rare willingness to be frank about his vulnerability to depression […] you may have to take him more seriously than your instincts suggest. (The Sportsman)

‘The story of his recovery and resurgence... struck a chord with fans around the world. When his autobiography, Behind the Mask, was released in November 2019, it reached the No 1 spot on Amazon’s charts within 24 hours.’ (iNEWS)

‘Behind the Mask is his unflinching account of how he overcame his battles with obesity, anxiety, drink and drug abuse, depression and despair to become one of the most exciting fighters of boxing’s modern age.' (Penguin.co.uk)

His autobiography Behind The Mask and ITV programme has shown how vulnerable people are to depression and other mental health issues. The country should make him an ambassador for mental health awareness. (Letter from reader, The Sun) --このテキストは、paperback版に関連付けられています。

Tyson Fury is the undefeated lineal heavyweight champion of the world. Born and raised in Manchester, Fury weighed just 1lb at birth after being born three months premature. His father John named him after Mike Tyson.

From Irish traveller heritage, the“Gypsy King” is undefeated in 28 professional fights, winning 27 with 19 knockouts, and drawing once. His most famous victory came in 2015, when he stunned longtime champion Wladimir Klitschko to win the WBA, IBF and WBO world heavyweight titles. He was forced to vacate the belts because of issues with drugs, alcohol and mental health, and did not fight again for more than two years. Most thought he was done with boxing forever. Until an amazing comeback fight with Deontay Wilder in December 2018. It was an instant classic, ending in a split decision tie.

Outside of the ring, Tyson Fury is a mental health ambassador. He donated his million dollar purse from the Deontay Wilder fight to the homeless. --このテキストは、paperback版に関連付けられています。

Ozzy
5つ星のうち1.0 SHOULD BE JUDGED BY WHAT IS OMITTED MORE THAN WHAT IT CONTAINS!
2020年3月16日に英国でレビュー済み
Amazonで購入
It’s time somebody applied some balance to what has been written about Fury in these reviews, often by fanboys who have no idea about what Fury actually tried to get away with or don’t really care because he beat Wilder & Klitschko.

The biggest events in Fury’s life that should have been covered by this “autobiography” are his win against Wladimir Klitschko in Germany, his struggles with mental health and his drug failures, particularly his failure for Nandrolone. The first two of these topics get plenty of space in this book while the third is given about one side and not dealt with at all other than for Fury to try to ship the blame onto UKAD.

In fact Tyson Fury has 3 strikes against him with UKAD, two drug failures - Cocaine and Nandrolone
(also known as 19-nortestosterone) as well as refusing to give a sample, which is rightly regarded as a drug failure since athlete’s should never be able to control when they give a sample to testers. The main drugs case against Tyson Fury, and his cousin Hughie, was when they failed a drug test for the anabolic steroid, Nandrolone - Tyson failing after his fight with Christian Hammer in February 2015.

Both Fury’s claimed they ate uncastrated wild boar every week from a local farm and it was this that accounted for their drug test failure, however the farmer they used at the independent NADP (National Anti-Doping Panel) tribunal, against UKAD, has this very week claimed that they paid him £25,000 for his evidence. However what Fury, nor his fans and fanboys, didn’t know when making this excuse is that the ingestion of wild boar or pig offal had already been investigated by scientists. In addition, as this excuse and their ensuing legal cases, had been used many times, UKAD had issued a statement in 2011 that athlete’s should avoid boar and pig offal. Note that this directive wasn’t because athlete’s had a sniff of a good case when using this excuse, it was simply to cut down on the costs of legal cases needed to prove that athlete’s didn’t have a case.

So how do the drug testing agencies know that this claim about eating uncastrated wild boar is a red herring?
Simple, this was looked at scientifically by sports and biochemistry experts over some years. The failure amount for 19-nortestosterone in an athlete’s blood is not zero it is 2ng/ml (nanograms per millilitre) and in ALL the tests, after feeding the volunteer athletes the various boar and pig offal before testing (yuk!), the maximum amount measured was 1/16 th of the 2ng/ml failure point – and this quantity wasn’t raised by exercise. Therefore for Tyson and Hughie Fury to fail a drug test for Nandrolone each of their blood samples must have contained more than 2 ng/ ml of Nandrolone – an amount that they absolutely MUST have obtained from non-natural sources.

Note that even if this research into boar and pig offal ingestion hadn’t been done, the Fury’s were still guilty as they had ignored the 2011 UKAD directive against eating boar and pig offal – it is up to an athlete to take responsibility for what is in their body.
The rather convenient extended period of mental health problems that Fury experienced, and which delayed the Tyson & Hughie Fury vs UKAD tribunal just long enough to make it unreasonable for witnesses to be expected to remember exactly what happened 27 months ago, allowed both Tyson and Hughie to get a very lenient backdated 2 year ban each.

How can Fury leave out the details of all of this in his “autobiography” – the reason is absolutely clear to those who followed the UKAD case closely.
Tyson Fury clearly doesn’t want to tell the truth and admit what he did. I would have more respect for him as a person if he just admitted he made a mistake. IMO he should have devoted just as much space in his book to this issue as he did for his mental health and boxing career to give the book some balance - but it's obvious why he avoided it.

If anyone doubts the veracity of what I’ve written here, and can’t be bothered to read up on all the details, then I suggest they simply think about why Peter Fury wouldn’t train Tyson anymore after the NADP drug tribunal and removed him and his son, Hughie, away from the influence of Tyson.
Indeed, ALL boxing fans should also question whether they should believe anything that comes out of Tyson Fury’s mouth, for example: Tyson now trains and fights in the US and so UKAD only test him when in the UK and he’s out of competition - and except for the last month before the Wilder rematch, he went untested by VADA, who also didn’t test him for the Schwarz and Wallin fights. This suggests to me that Tyson Fury isn’t fighting in the US just for the money. However, he could quite easily prove my suspicions are totally wrong by enrolling in VADA full-time (365 x 24/7 + in-competition testing) just as Anthony Joshua, Dillian Whyte & Katie Taylor have done and he can quite easily afford this now.

I look forward to Tyson one day writing a proper, warts and all, autobiography, possibly before Peter or Hughie Fury beat him to it. Until that unlikely event I will file his current effort under BIN!

Mrs JCA
5つ星のうち5.0 It doesn’t matter how big you are ...
2019年11月17日に英国でレビュー済み
Amazonで購入
Depression is not put off by your physical stature, your financial or professional success. It pays no attention to how much you’ve gone through or how many people are battling for you.
All this is evident in Tyson’s Autobiography. You feel as if you’re sat having a brew with a friend as you read the book. There’s sufficient reference to his boxing encounters to keep it interesting for sports fans and enough about depression (including details of where to get help), to hopefully help more people realise it’s nothing to be ashamed of.
続きを読む
34人のお客様がこれが役に立ったと考えています
違反を報告
レビュー を日本語に翻訳する

Steph
5つ星のうち5.0 Brilliant. Best book I have read in a very long while, for a lot of reasons. Read it!
2019年11月22日に英国でレビュー済み
Amazonで購入
Beautifully engaging book, I loved the style of this book- not just incredibly interesting but written so well that it is effortless reading. As a counsellor I loved it for all the powerful personal experiences of mental health struggles that Tyson was brave enough to share. I will definitely recommend this book to my clients I think everyone but men especially could be very motivated by it. I have already recommended it to my colleagues.
続きを読む
29人のお客様がこれが役に立ったと考えています
違反を報告
レビュー を日本語に翻訳する

Son
5つ星のうち1.0 MISPRINT with chapter 9 missing and no option to exchange/ get refund!!
2020年2月1日に英国でレビュー済み
Amazonで購入
I purchased this book as part of my partner's Christmas present. The biography itself has been great so far. But at the end of Chapter 8 (pg. 152), the subsequent chapter is replaced by the last two pages of Chapter 6 and repeats all of Chapter 7( in other words, repeating pages 121 to 136, after Chapter 8). Chapter 9 is omitted almost in its entirety with only the last 3 pages present. Obviously this must be an accidental misprint, however there appears to be no option to return the faulty book for a refund or exchange for a correctly printed one!!
続きを読む
21人のお客様がこれが役に立ったと考えています
違反を報告
レビュー を日本語に翻訳する