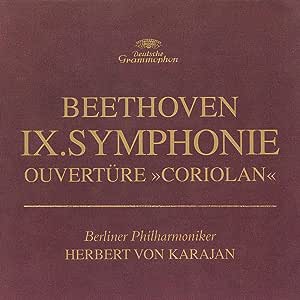 This performance is also available on Deutsche Grammophon in an earlier, mid-price incarnation, but this version is clearly the one to own, since the remastered sound is a definite improvement over previous issues. Herbert von Karajan always did a good job with this symphony, and his performances are quite consistent, even down to the very backward balance of the chorus. By general consensus, though, this is the best of them. --David Hurwitz

J. campbell
5つ星のうち5.0 Powerful Version.
2013年9月14日に英国でレビュー済み
Amazonで購入
Bought this by accident, thinking it was the version used in A Clockwork Orange. Then found out it was, a result. The end of this ninth is used as the music cue for "I was cured alright".

There are a lot of Von Karajan knockers out there, but to my ears this 9th sounds muscular and heroic. The opening strains sound like God creating the Universe. For such an old recording this has a big sound, like having the Berlin Philharmonic playing in your front room.

pianoreview
5つ星のうち5.0 A Must Have
2017年12月20日にアメリカ合衆国でレビュー済み
Amazonで購入
One of the very greatest Beethoven 9ths recorded, though I prefer the 1970s version slightly more. Still, it is very much worth having this intense, dramatic performance. Karajan does not hold anything back - both intense and triumphant, and showcasing his magnificent orchestra. I'm not one to judge the singers as the greatest opera singers rarely sang in this work. But this performance is still every bit a sonic blockbuster.
続きを読む
5人のお客様がこれが役に立ったと考えています
役に立った
フィードバックを送信中...
フィードバックをお寄せいただきありがとうございます。
申し訳ありませんが、お客様の投票の記録に失敗しました。もう一度試してください。
違反を報告
レビュー を日本語に翻訳する

Whatev
5つ星のうち5.0 The greatest work of the greatest composer.
2002年9月30日にアメリカ合衆国でレビュー済み
Amazonで購入
The Ninth Symphony is certainly Beethoven's greatest work, his masterpiece, and in this recording von Karajan conducts the Berliner Philharmoniker in a stellar performance. Usually there is at least one movement that is weaker than the others, but not here. Under von Karajan's direction each movement could be considered a triumph by itself, especially the final movement with it's exquisite chorus. Add to this Deutsche Grammophon's "Original Image Bit Processing" technology, which allows the re-creation of the original sound image of the performance, and the result is the finest Ninth it has ever been my pleasure to enjoy. I have owned many different recordings of this work, but I'll never need to look for another- von Karajan and the Berliner Philharmoniker can't be topped!
続きを読む
17人のお客様がこれが役に立ったと考えています
役に立った
フィードバックを送信中...
フィードバックをお寄せいただきありがとうございます。
申し訳ありませんが、お客様の投票の記録に失敗しました。もう一度試してください。
違反を報告
レビュー を日本語に翻訳する

Ryan Richards
5つ星のうち3.0 Not what I expected
2003年6月30日にアメリカ合衆国でレビュー済み
Amazonで購入
I was sure this version of the Ninth was going to be my all-time favorite, so I was somewhat disappointed when the overall effect it created was just... average. Another reviewer put it best: The chorus sounds as though they're "obscured behind a thick sonic veil." In fact, moments of the famous last movement--including the all-important choral return after the orchestral fugue--sound like musical soup, with all the sounds blending into an indistinct blur. This is a real shame, because von Karajan definitely knows what he's doing--moments of this symphony are interpreted in ways more inspired than I've heard anywhere else. The final "vor Gott" in the last movement, for example, just before the tenor solo, is gigantic and terrifying. The second movement, too, is played with a speed and an energy I haven't found anywhere else. Other conductors make the scherzo sound mysterious; von Karajan makes it all-out demonic. It's a treat. Not much to say about the first and third movements; they're well performed, but not particularly interesting. I wouldn't exactly say von Karajan plays the third movement flatly, but it definitely isn't as lush and tender as other recordings I've heard, either. I would echo the other reviewer again when I say this recording is well-interpreted and sufficiently inspired to warrant a listen, but understand that the recording technology and the sound mixing just don't support von Karajan's vision.
(P.S. The soloists are indeed powerful and joyous and amazingly skilled and just unbelievably competent... but the timpani do indeed sound like tin pots. Karma, I suppose.)

Reading reviews on Amazon and elsewhere will show that not everyone appreciates Karajan's recording of the 9th. Some reviewers seem to think of it as being overdone, or lacking in feeling/emotion. This is entirely a matter of personal taste. The recording is crisp, deliberate, technically masterful, and very enjoyable. I have also enjoyed Toscanini's and especially Bernstein's renditions. However, this is no worse than theirs, and certainly much neater than Toscanini's. I would rank this highly, and alongside Bernstein's rendition.