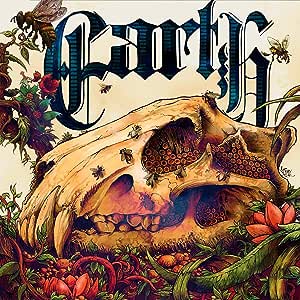 Bees Made Honey in the Lions Skull [12 inch Analog] インポート

Scott Hedegard
5つ星のうち5.0 Absolutely great audio painting by drone legends
2016年5月16日にアメリカ合衆国でレビュー済み
Amazonで購入
Drone pioneers Earth first made waves on the metal/experimental scene with a couple of albums that were pure walls of repetitive hypnotic guitar washes, and on "Earth 2", regarded by many fans as the definitive early Earth album, the drone was carried out to extremes, particularly on the last cut, which basically repeated a slow sequence for 25 minutes plus. That is the kind of stuff that is best experienced when lounging and wanting to immerse yourself in a mesmerizing or meditating frame of mind, and has an eerie way of creeping in your brain and creating a near timelessness that is not for the impatient of mind. I don't do any drugs or booze, having given one up 30+ years ago, the weed and derivatives, and alcohol almost 23 years ago. I never took anything heavier, knowing my system couldn't handle it, but I can imagine listening to "Earth 2" after partaking of some fine smoke, and floating away.
Earth however show they are not one trick ponies, and "Bees Made Honey In The Lion's Skull" is a different beast, but still retains some of the original identity, mainly with slower tempos. Beyond that, we get a much broader scope, with real structured instrumental tunes, containing keyboards and on a few cuts guitar work from Bill Frisell. His playing has never appealed to me much, as he is a minimalist who doesn't stand out much more than a person who has been playing guitar only for a few months. On this CD though his style fits in, as we are transported to the high desert for an excursion worthy of the early pioneers.
Some reviews have described this is country, but it is not. This brings images of the Old West, tumbleweeds, watching the last drop of water drip on the sand out of your canteen as you watch the vultures begin to circle. However, it's not gloomy - we can easily see our poor stranded soul finding a small town with water, food and maybe a saloon close to some railroad tracks that will take our hero to safety.
I conjure up images of the Petrified Forest in Arizona, the lava beds of New Mexico, canyons of Utah. It's truly musically descriptive, beautiful and mesmerizing throughout. No silly fiddles, slide guitar that gets so overused in western style movies and TV, or anything that would dumb it down. The guitars are still there, and overall "Bees . . . " is a masterpiece of nuance and understatement. Saddle up, boys - we gotta make Cheyenne in time to catch the livestock train to Omaha by sundown.
続きを読む
6人のお客様がこれが役に立ったと考えています
役に立った
フィードバックを送信中...
フィードバックをお寄せいただきありがとうございます。
申し訳ありませんが、お客様の投票の記録に失敗しました。もう一度試してください。
違反を報告
レビュー を日本語に翻訳する

Autonomeus
5つ星のうち5.0 Lush and beautiful, Earth floating above the ground with layered sound
2019年6月18日にアメリカ合衆国でレビュー済み
Amazonで購入
I haven't heard all of Earth's albums, but many consider this their best, or favorite, and it is certainly more accessible than the others I've heard. No vocals -- evocative of monotonous wide open spaces.

Mastermind and guitarist Dylan Carlson is joined by Adrienne Davies on drums, Steve Moore on piano, electric piano, and organ, Don McGreeny on bass, and Bill Frisell on guitar on tracks 1, 4, and 5. Carlson makes Western music -- not country western, but Western music of deserts and mountains. Frisell fits right into this aesthetic, and his distinctive sound can be heard blending with Carlson.

Elsewhere piano is prominent, which makes this album very different from the others I've heard by Earth. When I first heard of the band I had the impression they were doom metal. They're not, and this album is very far from any sort of metal.

I recommend it highly, along with their new one as of 2019 Full Upon Her Burning Lips (see my review) and Primitive & Deadly (2014 -- see my review), with vocals from Carlson's friend Mark Lanegan and Rabia Shabeen Qazi, which is heavier than "The Bees Made Honey..."
続きを読む
1人のお客様がこれが役に立ったと考えています
役に立った
フィードバックを送信中...
フィードバックをお寄せいただきありがとうございます。
申し訳ありませんが、お客様の投票の記録に失敗しました。もう一度試してください。
違反を報告
レビュー を日本語に翻訳する
その他の国際レビューを読み込む

ceffalo
5つ星のうち5.0 Great music, a must own album for music enthusiasts.
2008年8月22日にアメリカ合衆国でレビュー済み
Amazonで購入
Usually music like this is found in movie soundtracks and the like. I could see this working for a Clint Eastwood western, or perhaps for No Country for Old Men. It's doomy and hypnotic at once. Very psychedelic, too.

But, above all, it's great music. Top notch work by fantastic musician visionaries. I've heard some of Earth's early work and I can say that they've come a long way from their origins.

Originally these fellas were making heavy, droning stuff, very much like the sound you'd get with Nirvana, only played through a terribly oppressive constant drone of sound, instead of a song with a chorus and melody. No, their early work was simply a guitar and bass guitar playing a wall of distorted, doomed, nerve scratching sound.

With this album, "The Bees Made Honey in the Lion's Skull," they've widened their ideas quite a bit. There's a nice drum tempo to square things off. There is more complexity, a development of more instruments to make songs.

And, these songs are worked out perfectly, too. Exacting lengths. Beautiful recording. I'd say that this album is every bit as good as Pink Floyd's "Dark Side of the Moon" for pure musical enjoyment. It's easily one of the best albums I've ever heard and I just don't get enough of it in my ears.

great horse
5つ星のうち5.0 Slow
2019年1月6日にアメリカ合衆国でレビュー済み
Amazonで購入
Great record, great cover art. The vinyl sounds fantastic. Every song is slow and heavy and every song kind of reminds me of the Bridge of Sighs Song by Robin Trower and that is high praise.
続きを読む
役に立った
フィードバックを送信中...
フィードバックをお寄せいただきありがとうございます。
申し訳ありませんが、お客様の投票の記録に失敗しました。もう一度試してください。
違反を報告
レビュー を日本語に翻訳する

PET
5つ星のうち5.0 The SUN is hot, I'm thirsty and I'm listening to this album...
2008年6月27日にアメリカ合衆国でレビュー済み
Amazonで購入
Hmm.... yeah. This album is all about the "feeling". I had this album in MP3, but I wanted to support the band and get the original album. The album cover is absolutley amazing.