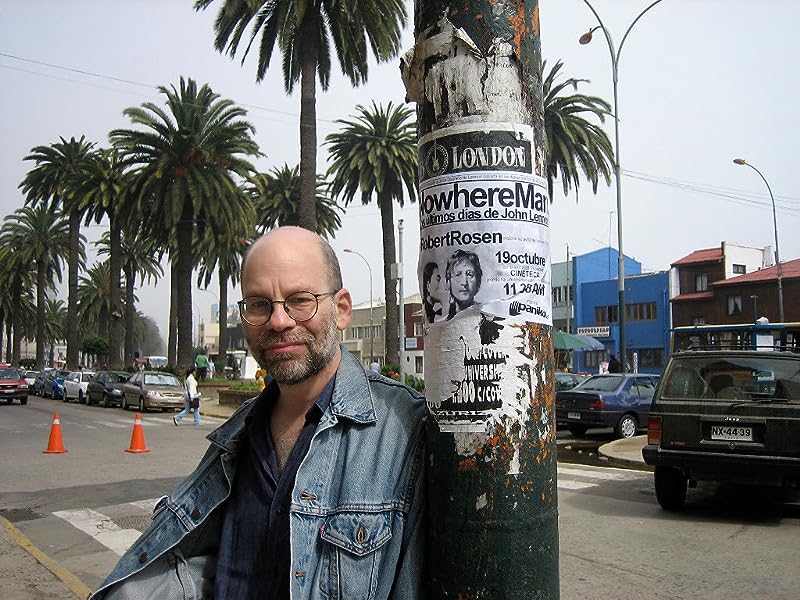 Beaver Street: A History of Modern Pornography: From the Birth of Phone Sex to the Skin Mag in Cyberspace: An Investigative Memoir (英語) ペーパーバック – 2012/3/20

Robert Rosen is the author of the international bestseller Nowhere Man: The Final Days of John Lennon. His work has appeared in a wide array of publications all over the world, including Uncut, Mother Jones, The Soho Weekly News, La Repubblica, VSD, Proceso, Reforma and El Heraldo. Over the course of a controversial career, Rosen has edited pornographic magazines and an underground newspaper; has written speeches for the Secretary of the Air Force; and has been awarded a Hugo Boss poetry prize. Rosen lives in New York City with his wife, Mary Lyn Maiscott, a writer, editor and singer.

Robert B.
5つ星のうち5.0 Interesting Book
2013年7月30日に英国でレビュー済み
Amazonで購入
Having an interesting surname, as in the Beaver Street title I purchased this book. As of yet I have not read it and will keep it for a rainy day or embarrass a member of my surnamed family and give it to them as a wrapped gift.
続きを読む
役に立った
フィードバックを送信中...
フィードバックをお寄せいただきありがとうございます。
申し訳ありませんが、お客様の投票の記録に失敗しました。もう一度試してください。
違反を報告
レビュー を日本語に翻訳する

He shows the anti-porn folks as the true hypocrites ( and criminals ) that they were( are ) especially Meese - who Dante would have consigned to a very low level in hell and Traci Lords who should be the poster child of game theory because she gamed the system so thoroughly to her own advantage...a woman so self-consciously wanton that a judge even said that child pornography laws weren't meant to cover a person like her.

I am only giving it 4 stars because it falls apart a little at the end and could have been more thorough in my opinion. But, there aren't a whole lot of insider accounts of this industry, so its worthwhile. He also wrote a book on John Lennon. Nowhere Man: The Final Days of John Lennon which I have not read.
続きを読む
4人のお客様がこれが役に立ったと考えています
役に立った
フィードバックを送信中...
フィードバックをお寄せいただきありがとうございます。
申し訳ありませんが、お客様の投票の記録に失敗しました。もう一度試してください。
違反を報告
レビュー を日本語に翻訳する

It's a shame that names have to be changed in non-fiction books like Beaver Street. I was hoping to recognize the colleagues who's names were changed by Rosen. But that didn't happen. I suspect this means it will be all the more difficult for future writers on this topic to figure out who's who.

To my surprise, in Chapter 4, Rosen describes Carl Ruderman, the person with the money behind High Society, as very involved with its day-to-day operation. Furthermore, his anecdotes about working for High Society came across as very credible. I found myself feeling, "I'm sure these things really happened." Nevertheless, I think caution is in order, because Rosen's stint at High Society is a small fraction of the magazine's life, and the situation may have changed over time. After finishing Chapter 4, I decided the extent to which Ruderman involved himself with the day-to-day operation of High Society, over the long run, remains an open question.

Years ago, I heard about the murder of editor Bill Bottiggi. But I never knew about the circumstances leading up to the murder, as Rosen describes it. I find Rosen's account very disconcerting. After all these years, I have to reconsider placing Bottiggi in the "all good" and "nice guy" category in my head. Initially, I believed Rosen's account. Later, I found myself not wanting to believe it, and longing for accounts by other people who knew Bottiggi.

Skip Slavik
5つ星のうち5.0 Beaver Street
2012年7月21日にアメリカ合衆国でレビュー済み
Amazonで購入
After reading Neil Chesanow's glowing review of Robert Rosen's Beaver Street: A History of Modern Pornography, I decided this would be a good time to say a few words about this fascinating book. Beaver Street is indeed "splendid: elegantly written; well researched" -- a completely enjoyable book. It does for the porn industry what Hunter S. Thompson's Hell's Angels did for biker gangs, and that's a high compliment: the best personal, behind-the-scenes expose I've read since Thompson's book. The parts of it that dealt with the comings(pardon the pun) and goings of the day-to-day travails of the working pornographer remind me very favorably of Henry Miller's portrayal of life at the "Cosmodemonic Telegraph Company" in Tropic of Capricorn -- the kind of giddy despair that comes through is disturbing. . . and brilliant. The discussion centering on the Lockhart Commission, Ed Meese, and Traci Lords should be required reading for anyone concerned about the lengths to which government will go to interfere in the personal lives of its citizens. In a nutshell, a really fine book, a remarkable story and an essential piece of history as well.
続きを読む
3人のお客様がこれが役に立ったと考えています
役に立った
フィードバックを送信中...
フィードバックをお寄せいただきありがとうございます。
申し訳ありませんが、お客様の投票の記録に失敗しました。もう一度試してください。
違反を報告
レビュー を日本語に翻訳する

DCBikeGirl
5つ星のうち5.0 From Another Carl Ruderman Fan
2013年5月14日にアメリカ合衆国でレビュー済み
Amazonで購入
Your book was amazing! I downloaded it to my kindle and could NOT put in down last night. You perfectly capture the atmosphere of the office, that slight paranoia, tinged with smarmyness, with the forced instance that everything around here is perfectly normal. I too worked in the industry, though far more recently, but it seems nothing has changed.

Your assessment of CR is priceless. I too, have sat in front of that exquisite Victorian desk, surrounded by his priceless artifacts that invariably feature naked women or abstract genitalia, patiently waiting my turn for him to say, "...And Ms. XXXX, what good news do you have for me today?". From your description of him, I could hear his voice leap from the page. I could see him as I saw him in his office at 801 Second Avenue, a bit more shriveled version that the one you saw, but in that same beautifully cut, tasteful grey pinstripe suit, pocket square, and genteel sneer.

I loved the part about "the founder". After he lost the lease on the 19th floor and we were moved to the far less glamorous 11th floor, that bust was placed directly outside my door, so it would stare at me day in day out. It was rumored that there was a camera in it, but that was probably just conjecture.

He was elderly by the time I worked for him, yet he was insistent on never dying. He kept a personal chef with him at the office, a woman he paid far less than she was worth, peanuts really. She would prepare his daily vitamins and medications, dozens in all, and his breakfast and lunch in the office's formal dining room. All the upper management were expected to attend, but as a woman and a low level techie I was fortunately denied that privilege.

I liked your Maria. It explains his current secretary while I was there. She was a Mid-fiftish battleax of a hag who would agree with him if he said the sky was green, and spent much of her time repeating back anything he said in different words as if she had just thought of that. She, and the other woman before her, trained themselves to expect and indulge his every whim. The woman before at least seemed to see the humor in the situation, as Maria seemed to. I would have been stoned all the time too.

There was a whole host of crazy characters there who like me, had no other options at the time, and those of us that got out sometimes get together and talk about it, because no one else would ever believe us. They are a crazy bunch but those who survived, many are people I really like, cause as you and Maria were, we were witness to a legend being written. Like you I walked out of that office with no job but that "incredible lightness of being".

All in all you reminded me that despite everything, Carl Ruderman has charisma. A sly, slithering sort of charisma, but charisma just the same. I can't even say I dislike him. He is the sort of man who will do anything for money, and it seems that he did.

In the end, those of us that got tangled up in it have one hell of a story to tell at cocktail parties.

Penny Antine
5つ星のうち5.0 Very interesting book
2012年12月21日にアメリカ合衆国でレビュー済み
Amazonで購入
I thoroughly enjoyed reading this book and learned a great deal about this period in the history of pornographic magazines. There were so many fascinating facts I hadn't ever known before. A terrific job.
続きを読む
2人のお客様がこれが役に立ったと考えています
役に立った
フィードバックを送信中...
フィードバックをお寄せいただきありがとうございます。
申し訳ありませんが、お客様の投票の記録に失敗しました。もう一度試してください。
違反を報告
レビュー を日本語に翻訳する

Jeff Johnson
5つ星のうち3.0 A decent read about the early days of skin mags
2012年10月30日にアメリカ合衆国でレビュー済み
Amazonで購入
Not sure if I'm missing something here or the author got his family and friends to do all of the other reviews. The author does write well and covers a few topics that are of interest, like the the behind the scenes going-on's of skin mags during the "Great Porn Era" and the Traci Lords debacle. I grew up through the time period and "read" all of mags mentioned so there was some boyish joy to some of the material. I could do without the liberal rantings around politicians of that era and how "criminal" they were for trying to censor pornography. The author misses the fact that ALL politicians use these so-called causes to rally voters, both Republican and Democrat during this era.
続きを読む
6人のお客様がこれが役に立ったと考えています
役に立った
フィードバックを送信中...
フィードバックをお寄せいただきありがとうございます。
申し訳ありませんが、お客様の投票の記録に失敗しました。もう一度試してください。
違反を報告
レビュー を日本語に翻訳する