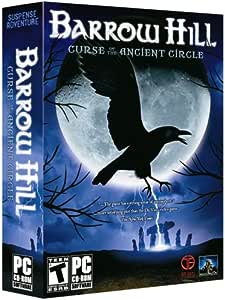 ROTC69
5つ星のうち4.0 Eh... so so.
2007年11月1日にアメリカ合衆国でレビュー済み
Amazonで購入
This game reminds me of those really bad survival horror playstation games. I say this because everything you do has to be precise. For example: You see a door and you can't open it. So you have to search high and low for a rubber band to place it on the doorknob. Still can't open the door, so you have to search high and low for something with substantial weight to balance on the rubber band, so that the rubber band can swing low turning the doorknob opening the door. Couldn't you just turn the doorknob with your hands? This example didn't come from this game, but it's similar stuff like. You can't do things without finding other stuff first. This can be long and frustrating... yet addicting if you're stubborn.

I wish you could do more than just point-and-click. The game is a bit eerie and at times I thought I was going to jump out my seat, but knowing all you could do is just point-and-click really takes away the excitement. There's no way you can go to combat with your fancy point-and-click trick. No no.. it's way too fancy.
A lot of the times I wasn't sure when was the right moment to click. The arrow of your mouse will turn into either a direction (left, right, or up) or a magnifying glass telling you that you can zoom either in or out. But you'd have to place your arrow directly over an item, and it's hard to identify interacting objects because they were random, at least in my opinion. My roommate thinks differently. You'd look at a table with a bunch of boxes on it, and you suspect there's something in there, you move your mouse the box on the left but your arrow doesn't change into the magnifying glass, nor does it change for the box on the right, but sure enough it changes for the box huddled inbetween a broken couch and empty bottles. And you'd have to be careful not to move the arrow so far up or down on the screen because black margin's will show up (containing objects you've picked up and can use).

I did enjoy having to find scraps of paper in various locations especially if they hold important information. My roommate hated this because that meant you had to read everything... and there was A LOT to read. But it made me feel like a real detective. My advice: make notes on everything you think is important. Just so you don't have to kill yourself trying to find that one scrap of paper in that abandoned and random place to figure out the combination of the lock to a room you need to go in.

I give this game a 3.5 because of the reasons I've mentioned. Having a battle would be fun, and only if it wasn't so random. But it did keep me going-- I am a bit stubborn to figure things out so I was always on my computer. I'd play it again in a year or so, just so I can forget the step-by-step process and start anew.

wysewomon
5つ星のうち4.0 Engaging Horror Mystery
2006年11月5日にアメリカ合衆国でレビュー済み
Amazonで購入
Conrad Morse, a noted Archaeologist, has received permission to excavate the mound at Barrow Hill, a site in Cornwall that has remained undisturbed since its construction in 2500 B.C.E., according to local legends. A mysterious force seems to surround the mound, as former attempts to survey the area have resulted in disapearances. Morse's excavations have drawn the interest of the press as well as aroused the ire of several conservation groups. Matters seem about to come to a head, and on the night of the Autumn Equinox they do--but not in a way that any might have dreamed. That night you--an unnamed character with an unspecified role--are driving down the Barrow Hill road listening to the radio when, shortly after sunset, your car stalls. Behind you, some sort of forcefield prevents you from returning the way you came. Your only choice is to go on, and in the process, solve the mystery of Barrow Hill.

Barrow Hill is a lovely 1st-person slideshow game in the style of the Dark Fall series (no wonder, as Jonathan Boakes and developer Matt Clark are sometime collaborators). The action takes place in a relatively limited area, all in the course of a single night. As your surroundings are mostly deserted, you have to rely on collecting inventory and clues to find out what has happened and heal the breach that is allowing a dark force to run ramampant in the area. MOst of the puzzles involve accessing locked or blocked areas and putting together information.

Despite the dark subject matter and the literal darkness of the screen, I did not find this game quite as spooky as it might have been. Some things startled me, but I never felt personally threatened. Of course, I never encountered the large glowing stone that, by most accounts, is capable of bringing your explorations to an abrupt end. I have heard that these encounters are the result of not having completed tasks in one area before going on to the next, so I think making a logical exploration of central areas before proceeding to peripheral ones may be a lifesaver in this game.

Sounds effect and music are understated. Sometimes you'll hear a spooky chord that seems to herald a momentuous event, only to have nothing really happen. You hear quite a few birds, but don't see many. Voice acting was quite good, however. I especially enjoyed the many amusing commercials you could hear on various radio stations.

Collecting inventory was mainly easy, barring one or two pixel hunts and a few places where I had to get a hint because I wasn't quite sure what I was looking for. Collating information was more complicated, partly because you could not keep the many documents you found during the course of the game. This made taking voluminous notes a necessity. Also, there were a number of red herrings: notes that seemed to have no bearing on the case and items you could interact with that didn't have any purpose. It was easy to get bogged down trying to do something with these items other than pick them up and put them down again. One puzzle seemed unnecessary, because by the time I solved it, I had already figured out what the clues it contained revealed.

I found the ending a little abrupt and disatisfying. Once you solved the final puzzle, things happened very quickly. There was not a lot of time to look around the last area you came to. I also was left wondering about the connections between some of the elements; I wasn't quite sure who were the good guys and who were the bad. A cut scene at the end seemed sort of tacked on.

All in all, I enjoyed this game, which took me maybe 10 hours to complete. It had a level of complexity in the puzzles which I have found lacking in many inventory-based games, and the plot line was engaging and well thought out. My main critique is that I wuld have liked to have seen some of the elements developed more. However, I look forward to more games from Matt Clark and company.
続きを読む
47人のお客様がこれが役に立ったと考えています
違反を報告
レビュー を日本語に翻訳する

Candice Houk
5つ星のうち4.0 great graphics
2010年6月5日にアメリカ合衆国でレビュー済み
Amazonで購入
I bought this game because of the other reviews I read. I was happy with the game, the graphics and sound is really great. It is not too hard of game play so you if your a SUPER gamer you will prob have it solved in a week. (if that) it is worth the time, and money most def. you get full access to roam and look everywhere. there are things you will have to read as you go along (notebooks) quite a bit actually, I don't care for too much of that, but it does not break the game for me. get it, buy it, you will like it.
続きを読む
1人のお客様がこれが役に立ったと考えています
違反を報告
レビュー を日本語に翻訳する

LBL
5つ星のうち4.0 some gaming site reviews overly harsh
2007年1月22日にアメリカ合衆国でレビュー済み
Amazonで購入
I thought this was a good game. These days, any adventure game with reasonable puzzles and appropriate length automatically deserve praise in my book. There is nothing worse than a long game with ill designed puzzles/fights to turn this player off (are you there Call of Chthulu?). Barrow has decent graphics, a spooky atmosphere, well designed locations and a gripping plot. The ending may have been better but this one still stands above the crowd (also recommended: scratches). Looking forward to play Boakes' games next, also on the pad: the black mirror and its follow-up nibirus. Hopefully they will be as good as the Barrow.
続きを読む
1人のお客様がこれが役に立ったと考えています
違反を報告
レビュー を日本語に翻訳する

LeAnne W.
5つ星のうち5.0 Barrow Hill: Curse of the Ancient Circle
2014年1月27日にアメリカ合衆国でレビュー済み
Amazonで購入
Loved It! I bought the game because I was out of Nancy Drew games and enjoy that type of mystery gaming. This one was better than any of the Nancy Drew games I have played and I have played all but a couple of the newer ones. Very exciting, wonderfully visually appealing and just difficult enough to look up a walkthrough. My type of game!!!!
続きを読む
2人のお客様がこれが役に立ったと考えています
違反を報告
レビュー を日本語に翻訳する
すべてのレビューを参照します
Amazonプライム会員ならお急ぎ便、日時指定便が使い放題
さらに、映画もTV番組も見放題。200万曲が聴き放題 。クラウドに好きなだけ写真も保存可能。
> プライムを無料で試す