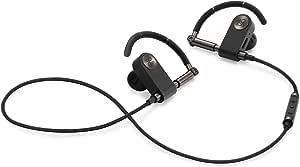 Jamie Ewan Henderson
5つ星のうち2.0 A big miss by B&O
2019年10月30日に英国でレビュー済み
色: Graphite BrownAmazonで購入
I bought these despite having seen the mainly negative reviews as I'm a big fan of B&O products and their 'flaws' actually seemed to be perfect for my needs; I wanted wireless headphones, I could wear while skateboarding and they wouldn't fall off, which also allowed me to hear some background noise.

The form and comfort, while not the greatest, certainly ensured that they were secure once worn. I wouldn't want to wear these for prolonged periods but for short periods they were adequate. The complaints about the cable being too short are fair. I don't believe it's too short however, it's a quality product and cable is heavy duty. Being thick makes it somewhat unwieldy so I found it easier to wear it at the front rather than behind my neck.

My big issue is the battery. Perhaps it's the set I got however, as this comes up as a frequent complaint I don't think I'm unique. I noticed the set I received would never charge to 100% (only ever 90%) even after being run down and charged to calibrate (I have multiple other B&O headphones that do charge to 100%). If I charged them up and left them on my desk overnight the charge would drop, despite being off, to 70-80%

Running the headphones the charge dropped around 20% every 15-20 minutes. An average charge would last 1.5-2 hours, a far cry from the 5 hours advertised. I accept that signal strength and volume impact bluetooth battery however, I received this performance when using the headphones at my desk, at low volume, and me standing less than a meter away from my laptop. I imaging it outdoor conditions this would be significantly worse.

While I doubted I would get 5 hours, 2 hours at most while being used in ideal circumstances, simply isn't acceptable especially given that the battery isn't obviously replaceable.

I really wanted to like these headphones and £75 for a product of B&O quality seemed great value however, utterly abysmal battery life means these simply aren't fit for purpose. There are so many wireless headphones on the market these days, even heavily discounted, these simply aren't good enough to justify owning.
続きを読む
18人のお客様がこれが役に立ったと考えています
違反を報告
レビュー を日本語に翻訳する

C. Jones
5つ星のうち5.0 Superb! And very comfortable to wear!
2020年4月22日に英国でレビュー済み
色: Graphite BrownAmazonで購入
These earphones are superb! Fantastic sound quality and really beautiful made, as you would expect from B&O. Sound quality is excellent, and the fit is brilliant - they are super comfortable to wear. They are also very secure when in your ears, and I can do skipping, press-ups and even handstands and they remain securely in place. Honestly if these earphones had cost me 250 quid I wouldn't have been disappointed - at 70 quid they are an absolute bargain!

Note: I am not sure why the opinion in Amazon reviews seems so polarized, but it seems mostly due to the fit of the earphones. However I think there is some confusion here. These are not in-ear earbuds, but rather the each "bud" of either earphones sit comfortably over the ear hole, which gives a very comfortable fit with great sound. You are NOT supposed to try to force them actually inside your ear hole! Also, the earphones mount from the front of your ear as per the instruction booklet - I really believe some people are trying to mount them over the back of their ear, which would be impossible! Fitting them correctly takes about 20 seconds max.
続きを読む
5人のお客様がこれが役に立ったと考えています
違反を報告
レビュー を日本語に翻訳する

jonp
5つ星のうち4.0 Perfect for what I wanted, but probably not for anybody else
2019年5月26日に英国でレビュー済み
色: WhiteAmazonで購入
I bought these because I had a pretty unique requirement: non-AirPod (simply because I'm an Android user, and there's no customisation unless you use an iOS device) wireless earphones that still let background noise in so I can wear them in the office and still be able to hear people.

Sound is good, they sound better than AirPods and are much better than the earphones that come with phones etc, but not as good as the Earset 3i/A8.
Battery is fine too, gets me from 9AM -> ~3PM but I only listen on 10/20% volume.
Comfort is acceptable, but use the included foam covers - if you've had the 3i/A8 you know what you're getting yourself into.

Basically perfect for me, but not sure anybody else will be that happy with them given the competition. At £120 though I figured I'd just buy them and I'm very happy - wouldn't ever pay RRP.
続きを読む
5人のお客様がこれが役に立ったと考えています
違反を報告
レビュー を日本語に翻訳する

JC
5つ星のうち5.0 Not for everyone, but still very, very good.
2019年11月11日に英国でレビュー済み
色: Graphite BrownAmazonで購入
OK these are not for everyone (but tell me a set of earphones, or headphones, which are; this from an owner of many Grado’s, AKG’s and a pair of HD800 S’s). What I mean is they are typical B&O sound signature: in my view ‘smooth’.
They are retro in style. They sit differently, in your ears (A complaint in many other reviews): This can drastically affect the sound, especially the low frequencies, if pushed too far into the ear and obviously they will let external sounds in.
The button functions are OK.
The manufacture quality is very good.
I use them in the gym, for anaerobic, not aerobic: they are not waterproof, as far as I can determine.
I could imagine quite room listening would be good, where the wearer wants to move about and still maintain contact with the outside world. When about in street e.g. walking to work, where the wearer wants isolation, not so.
Now, an Initial RRP of >£250 – no way! But at this price a bargain; if they fit your ‘bill’.
続きを読む
2人のお客様がこれが役に立ったと考えています
違反を報告
レビュー を日本語に翻訳する

Phil
5つ星のうち4.0 SHORT BATTERY, SOME DETAILS WORSE THAN 3i... STILL A GOOD PRODUCT
2019年2月1日に英国でレビュー済み
色: Graphite BrownAmazonで購入
I used the new earset for several days and finally decided to return it. I have got the old 3i and I compared them carefully. At some details the new earset is worse than the old 3i. THE PISTON IS NOT AS SMOOTH AS THE OLD 3i. When comes to the sound, just fair, because it's bluetooth and DO NOT SUPPORT APTX which is very confusing (the old H7 supports! I'm the H7 owner as well). Moreover, I really cannot tolerate the battery, less than 4 hours I tested it with the 2/3 volume. I like the B&O products (always good looking), but this time I really disappointed with the new earset.... BUT I THINK IT IS A GOOD PRODUCT THAT CAN BE USED WHEN DOING SPORTS BECAUSE YOU ARE ABLE TO HEAR THE OUTSIDE, IT'S SAFE!! If you don't mind the coins above, it's a good product for you.
続きを読む
4人のお客様がこれが役に立ったと考えています
違反を報告
レビュー を日本語に翻訳する
すべてのレビューを参照します
Amazonプライム会員ならお急ぎ便、日時指定便が使い放題
さらに、映画もTV番組も見放題。200万曲が聴き放題 。クラウドに好きなだけ写真も保存可能。
> プライムを無料で試す