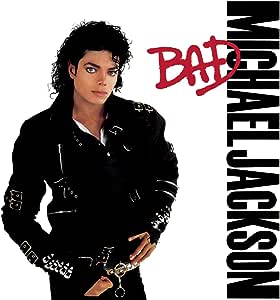 "We wanted a tough album," producer Quincy Jones recalls in a bonus interview on this special edition of Bad. Though the 1987 blockbuster would appear to be Michael Jackson's most personal statement to date--9 of its 11 cuts were written solely by him--its appeal also rested more on craft than the idiosyncratic art of Thriller and Off the Wall. At the same time, most of Bad has aged well in spite of its digital brittleness and MIDI treatments of gems like Jimmy Smith's organ solo on the title track. While the third best of his first three Epic solo discs, Bad carries a lot of what people love about Jackson's music. This disc also benefits from two fine outtakes, the exciting, uptempo "Streetwalker" and the Carpenters homage "Fly Away." Either could easily have extended the record's run of hit singles. --Rickey Wright

How do you follow-up the biggest album of all-time? That was MJ's challenge with 1987's Bad . While failing to scale the sales heights of Thriller , Bad boasted a record-breaking 5 #1 singles. This 2001 special edition adds three unreleased tracks, plus interviews with producer Quincy Jones.

Scarlet Jupiter
5つ星のうち5.0 218. Bad 2017 (30th anniversary)
2017年8月31日に英国でレビュー済み
Amazonで購入
Michael Jackson's 1987 classic is celebrating its 30th anniversary today. Released on the last day of summer 1987, "Bad" was the album that made MJ the King of Pop. The cover artwork, the songs, the videos, the tour; everything about this pop landmark is truly iconic. At the time, it was only Michael Jackson and Madonna who presented such brilliant records, with spectacular accompanying videos, creating a buzz that extended beyond just the music, which made both of them the true royalty of pop. Among its array of accolades, "Bad" made history as the first album to have 5 of its singles peak at No. 1 on the Billboard Hot 100 consecutively. It is, also, the 9th best-selling album in UK history with sales of 4 million units, charting behind his own "Thriller". Worldwide sales exceed 32 million, rendering it one of the top-selling albums ever. Michael would have turned 59 years old 2 days ago. His legacy will live on forever, true legends never die.
続きを読む

Roberto M
5つ星のうち5.0 Good quality picture disc.
2016年4月8日に英国でレビュー済み
Amazonで購入
I bought the Vinyl picture disc edition as it looks very good in my collection. I terms of music, I personally believe this album is one of the best of MJ, specially "Man in the Mirror" and "Bad" which is one of my all time favorites. Very little to add as we all know how good the music is. For those wanting to buy this collector item, this is highly recommended and I was very lucky as the seller sent it in very good condition, new, with a plastic envelope and an informative sheet, which most of this picture disc editions do not include. Fully recommendable in all senses.
続きを読む
5人のお客様がこれが役に立ったと考えています
役に立った
フィードバックを送信中...
フィードバックをお寄せいただきありがとうございます。
申し訳ありませんが、お客様の投票の記録に失敗しました。もう一度試してください。
違反を報告
レビュー を日本語に翻訳する

Pixi
5つ星のうち5.0 Fun, feel-good, 80s, MJ perfection - an all-time pop classic
2014年4月19日に英国でレビュー済み
Amazonで購入
Michael Jackson wanted Bad to be even better than Thriller. But Thriller was the highest-selling record of all time, winner of 8 Grammys, the start of story-telling in music videos, and the breaker of racial barriers. How could he top it? While Bad failed to perform as well as Thriller, it contained classics such as Smooth Criminal, The Way You Make Me Feel, Man in the Mirror, Dirty Diana, and I Just Can't Stop Loving You. Who can't conjure up an image of the Bad video with the dancing gang, or the Smooth Criminal suit? Bad was an amazing album in its own right, and has become one of my absolute favourites!

Bad is all 80s and full of fun. This album makes me happy; it makes me want to dance, it makes me want to have a good time. Each song just feels like a pop masterpiece. This album is varied and has a song for every mood, from the very 80s, feel-good fun of Just Good Friends (why do a lot of people dislike this song?), to the more rocky, sexy Dirty Diana, to the meaningful and emotional Man in the Mirror. If I had to choose between Thriller and Bad, I would choose Bad. Not only does this era have my favourite songs, but my favourite videos!

You probably know the classics like Bad, The Way You Make Me Feel, Man in the Mirror, Smooth Criminal and Leave Me Alone. But every song on this album is brilliant - there is no filler here at all. You get two bonus tracks, plus voice-overs from Quincy Jones talking about the making of the album, and why one of the bonus tracks, Streetwalker, didn't make the cut in 1987. I think excluding Streetwalker did the fans of '87 a great disservice - it has quickly become my ultimate favourite, even topping Dirty Diana and The Way You Make Me Feel, which I love. It might be an acquired taste... it's very fun, and suits my tastes perfectly, but others might find it silly... Everyone's different. I'm glad Streetwalker was included on the new release. I have no complaints about this album at all, except for one small thing: I'm So Blue would have been better than Fly Away. But other than that, it's an A+ album.

I believe this was actually MJ's most popular era, and it's easy to see why. He was in his prime here, his element - his music appeals to young, old, male, female, kids and adults. His videos are legendary, his choreography second to none. No one has topped MJ and possibly no one ever will. I'm just sad that I wasn't here to witness this era, and appreciate it, at the time. I would have been right up there at the barrier in my 80s gear, that's for sure.
続きを読む
4人のお客様がこれが役に立ったと考えています
役に立った
フィードバックを送信中...
フィードバックをお寄せいただきありがとうございます。
申し訳ありませんが、お客様の投票の記録に失敗しました。もう一度試してください。
違反を報告
レビュー を日本語に翻訳する

THOMAS NEWBON
5つ星のうち5.0 OMG (BAD 25) DELUXE ANNIVERSARY
2014年6月5日に英国でレビュー済み
Amazonで購入
what can you say about the package? (My favourite from this package and original album is DIRTY DIANA)

its got everything all about the very outstanding album of 5 hit single NUMBER #1's.(smooth criminal should of been a NUMBER 1 hit single). BAD was an achievement in the making, I always preferred it to Thriller, but this album got me inspired by him again, got me in to dance even more now, and every track felt amazing to be a single in my opinion as the filler tracks were more up beat than thriller because I thought Thriller's filler tracks had slow ballads and I didn't feel as connected to them than bad.(my opinion)x

the DVD was awesome to watch him still at his best, performing making real people cry not like today where little girls cry for Justin beiber! the best bit I liked in the bad tour Wembley was him performing - 'human nature'. The way he did the robot, the locking and popping with isolation was incredible. finally the poster you get with, I still have displayed on my wall :D
SPEED DEMON!!!
続きを読む
4人のお客様がこれが役に立ったと考えています
役に立った
フィードバックを送信中...
フィードバックをお寄せいただきありがとうございます。
申し訳ありませんが、お客様の投票の記録に失敗しました。もう一度試してください。
違反を報告
レビュー を日本語に翻訳する
その他の国際レビューを読み込む

In respect with this album 'Bad', I think it is my favourite of all of them. It is completely filled with great songs, pretty much all of which could have been hits. I think there are at least 7 or 8 singles on there. Not a single filler here.

My personal favourites on here are Bad, The Way You Make Me Feel, Man In The Mirror, I Just Can't Stop Loving You, Dirty Diana, Smooth Criminal, and Leave Me Alone. The special edition of this CD also includes the fantastic Streetwalker. This song is so good it is a shame it missed out on the original album.

What you realise when you buy all his CD's and look throught he booklets is that Michael Jackson actually wrote and composed most of his songs including his biggest hits. That I did not know, he's a music genius.
続きを読む
11人のお客様がこれが役に立ったと考えています
役に立った
フィードバックを送信中...
フィードバックをお寄せいただきありがとうございます。
申し訳ありませんが、お客様の投票の記録に失敗しました。もう一度試してください。
違反を報告
レビュー を日本語に翻訳する

MRS S J ASHLEY
5つ星のうち5.0 "BAD" is still GREAT
2013年1月20日に英国でレビュー済み
Amazonで購入
After seeing the BBC programme about the 25th Anniversary of the release of "BAD", I realised I didn't have it on CD. So I bought it from Amazon and WOW, it blew my mind all over again. Fantastic musical arrangements, MJ lyrics at their best and his own made up vocabulary, an album to be put on and played loud. At the first few bars of the first track you can't help but move to the beat.
A great album delivered to my door within days of placing my order. Thanks Amazon!
続きを読む
1人のお客様がこれが役に立ったと考えています
役に立った
フィードバックを送信中...
フィードバックをお寄せいただきありがとうございます。
申し訳ありませんが、お客様の投票の記録に失敗しました。もう一度試してください。
違反を報告
レビュー を日本語に翻訳する

Corby
5つ星のうち5.0 Tasty
2013年10月25日に英国でレビュー済み
Amazonで購入
Whew great three cds and a dvd has christmas come again,all comes in a handsome box two colour booklets and a mj poster thats a lot of content original bad album plus a album of bonus material and mainly original songs.A live cd of his 1988 wembly plus the dvd of said concert if your an Mj fan you should own this,and if you love music and entertainment its all here in great quality.
続きを読む
1人のお客様がこれが役に立ったと考えています
役に立った
フィードバックを送信中...
フィードバックをお寄せいただきありがとうございます。
申し訳ありませんが、お客様の投票の記録に失敗しました。もう一度試してください。
違反を報告
レビュー を日本語に翻訳する
その他の国際レビューを読み込む

MDB
5つ星のうち5.0 A great album!
2015年12月6日に英国でレビュー済み
Amazonで購入
Another one of Michael Jacksons best albums. This is from a time when he was on great form and quite possibly at the peak of his career. All Michael Jackson fans should own this album it's packed with of some of his best work.
続きを読む
1人のお客様がこれが役に立ったと考えています
役に立った
フィードバックを送信中...
フィードバックをお寄せいただきありがとうございます。
申し訳ありませんが、お客様の投票の記録に失敗しました。もう一度試してください。
違反を報告
レビュー を日本語に翻訳する