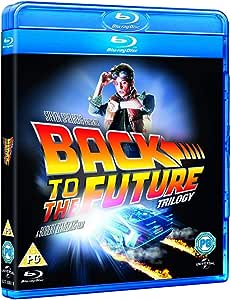 Jim T
5つ星のうち4.0 You built a time machine, from a deLorean?
2014年9月25日に英国でレビュー済み
Amazonで購入
Back to the Future was a genre defining film in my youth and spawned two worthy sequels with 2 & 3 being made at the same time (bit of movie trivia there!). I'm not going to review the films themselves as a majority of readers would have seen them already.

The blu-rays themselves are visually excellent with a flawless video transfer. This is certainly the best way to watch these films bar none, even the original looks like it was made last month due to the excellent clarity. Audio wise the films use Dolby HD soundtracks which also help revitalise the films with crystal clear dialogue and background effects. There is minimal sound thrown to the back speakers, but this is to be expected with this type of film. There are myriad extras included on the blu rays, including some very informative 'making of' documentaries and interviews.

A classic film series and an absolute bargain to boot this is the best way to experience these films.
続きを読む
1人のお客様がこれが役に立ったと考えています
違反を報告
レビュー を日本語に翻訳する

Dutch
5つ星のうち5.0 But who decided on the disc printing?
2012年8月1日に英国でレビュー済み
Amazonで購入
There is no need to go into the films as such as these have been pretty well covered.

The quality of the blu ray transfer is superb though, you can certainly notice a touch of make-up here and there. The difference between this and the original scenes found within the extras, you can see the amount of work that has gone into this transfer. It is a bit of a shame that with the tech available that the team didn't do much to hide the mapping outline from the car in flight at night, much like the original release of star wars where you can see the out of contrast block surrounding the ships. A minor gripe but there you go.

The bluray features are lovely. Not up to the quality of the film specific 'MUTHUR MODE' of the Alien Anthology but it is a stylish looking menu if a little corporate. All the features can be accessed in film and if you want to see the theatrical trailer, once it has finished it'll return you to the last position of the film you were up to. You can also access the in-film trivia mode etc. from the film so in that respect the disc is a pleasure to use.

The sleeve for this box-set comes with the increasingly popular foil finish which does look really nice and is not noticeable from the Amazon image so it was a treat to get more than I expected even at first glance.

My biggest gripe is the physical disc itself. I recently sold the DVD trilogy so I have no comparison to make but the images on the discs themselves are pretty shocking. They are boring and of really low quality. BTTF pt.III is by far the worst, it looks as though it is some sort of pirate copy shocker. Such a shame when the collection that has been put together has clearly been a labour of love.

As the films are of legendary status I cannot knock a star for the discs that will be hidden in the machine or box 99% of the time but it was a shame.
続きを読む
違反を報告
レビュー を日本語に翻訳する

Philbee
5つ星のうち5.0 It's about time...
2011年1月4日に英国でレビュー済み
Amazonで購入
Yeah, I know they used that tagline for the original trailer for BTTF2 - but it's apt here for this Blu-Ray release of the trilogy. Even if some of the effects shots are beginning to show their age, the speed, economy and the vitality of the storytelling on display isn't. After the relatively sunny and brilliantly entertaining Part 1, Part 2 is given a darker twist with a mind-messing plot line. Even Empire magazine's review at the time was headlined "Back to the Drawing Board", an opinion they have amended in the intervening years. Todays audiences will be much more receptive to it's temporal gymnastics. Part 3 blends all the themes from the previous two films, ending with a good old-fashioned show-stopping climax.

As I suggested earlier, the transparency of Blu-Ray format reveals differences between composite and live action shots, with the effects announcing themselves by looking slightly less sharp. But Zemeckis was no idiot, and he cleverly 'feathered' his effects shots with the live action. That Blu-Ray can resolve this kind of detail is astonishing, and the transfer boasts bright crisp visuals with noticeable (but not distracting) original film grain. The audio is similarly upgraded, the dynamic soundtrack full of slicing strings and rasping brass, mixed particularly brilliantly during the climax with the steam locomotive in Part 3. The instruction to 'PLAY LOUD' should be emblazoned on each of these discs - make sure the neighbours are out.

A final word about Part 3, which on all previous transfers had a strange 'NTSC' look to the visuals. This version is better balanced colour-wise, with the earthy reds of the landscape now held in check by the superior resolving power of Blu-Ray.

Complaints? Only mild. Comparing this (standard) Blu-Ray box set with the previous (2004, I think) DVD release, the packaging is a definite step backwards. The Blu-Ray face labels have rather blurry pictures of Marty, whereas the older DVDs were easily identified by crisp reproductions of the original movie posters. Also, the old DVD booklet was much more informative than the Blu-Ray's. In the end, it's the films that count - but I can't help but feel slightly disappointed. This will (probably) be the last time these great movies are released on a physical format (as opposed to downloading), and a little more time spent on presentation would have transformed a good package into a great one.

Davidoff
5つ星のうち5.0 You will love it, even if you have the DVD trilogy ersion
2013年1月12日に英国でレビュー済み
Amazonで購入
I first didn't know if I would buy it or not, as I already own the DVD trilogy version(4DVD),
But I am happy I did. What can I tell, others haven't told already? Well the quality is good (watching on 32"Philips flta screen), ofcourse if you see it on a 55" Plasma screen you will see more defects in the image. So I won't get into that. On my screen it looks like a new movie.
I really bought this version to have all the extras. I was afraid it would be the same as on the DVD version, but it is not, it has MORE. It has everything of the DVD version and then much more. Even some parts when they shot the movie with another actor, before they contracted Michael J Fox. Also some new interviews with the old cast, featurettes during the movie ( little screens will pop up and tell you funny things of the movie), I love the features , it is like watching the whole movie from a different point of view. Great.
Well if you like BTTF and even if you have the DVD trilogy version it is worth buying this one (I paid 9£) for it and it is worth every penny!!
続きを読む
違反を報告
レビュー を日本語に翻訳する

Wansteader
5つ星のうち5.0 Absolute Classic!
2015年11月5日に英国でレビュー済み
Amazonで購入
Title says it all. Wanted to introduce my 8 yr daughter to great films of a different generation and this three films are certainly in that category. She loved them but then this is after all one of Hollywood's greatest trilogies with Michael J Fox and Christopher Lloyd in terrific form along with the rest of cast and one of the most original stories then and since.