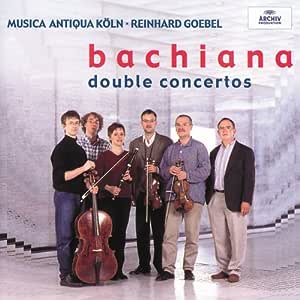 Bachiana is a sterling collection of concertos by Bach's sons. The most substantial work on this well-filled disc is C.P.E. Bach's Concerto for Harpsichord and Fortepiano from 1788, the year of his death. The two instruments are treated as equals, and the orchestra plays a significant role as well. The first movement offers a unique combination of drama (especially in the forceful orchestral interjections) and piquant wit, also characteristic of the Presto finale. Those movements sandwich a grave Larghetto of austere beauty. It's a deeply personal, perhaps valedictory, work. The other selections have plenty of appeal, too. J.C. Bach's Sinfonia Concertante is a charming work of deceptive lightness. W.F.E. Bach's Flute Concerto opens with a first movement featuring complex textures and moves on to a gently lovely Largo and a delightful Vivace finale. The least known of these four Bachs, J.C.F., contributes a fascinating Concerto for Fortepiano and Viola, notable for fetching interplay between the instruments and the integrated orchestral role. --Dan Davis

Gio
5つ星のうち5.0 The "Old Wig" Could Be Proud of His Sons
2008年8月25日にアメリカ合衆国でレビュー済み
Amazonで購入
Two of JS Bach's sons became more renowned and more influential in their lifetimes than their father - Carl Philipp Emanuel (1714-1788), the Berlin Bach, and Johann Christian (1735-1782), the London Bach. Two more had significant provincial careers, Wilhelm Friedemann (1710-1784) in Dresden and Halle, and the least known, Johann Christoph Friedrich (1732-1795) in Buecke, near Hanover. Certainly the fact that they were Bachs, of a family of musicians four generations deep, contributed hugely to their musical development and shaped their personal destinies, but their heritage has far too often overshadowed their accomplishments as composers, and I intend to say no more about it.

Baroque and Rococo concertos were essentially show-off display pieces, circus acts for the fingers and lips of the soloist. Concertos for harpsichord or fortepiano, however, had an inherent difficulty; neither instrument had the dynamic volume to dominate even the small period orchestra. No matter how affective the keyboard instrument was in its melodic statements and cadenzas, the full orchestra would eventually enter and expunge the musical impression made by the soloist. Even the great Alessandro Scarlatti couldn't solve the problem of the well-balanced harpsichord concerto, and Vivaldi shunned the genre. Listening to Mozart's fortepiano concerti in a modern concert hall is almost frustrating enough to justify playing them on a modern grand piano, if only a pianist could be persuaded to play with taste.

Johann Christoph Friedrich solved the problem by pairing the fortepiano with the mellow timbres of the Baroque viola and using the orchestra very sparingly. At times the viola seems to stand in for the full orchestra, while the fortepiano plays continuo with the left hand. The larghetto second movement is effectively a trio sonata, while the final allegretto sounds like a happy concertante. This is a fine piece of music by the modest guild master of Buecke, made very fine indeed by the superb fortepiano technique of Robert Hill, and the subtle virtuosity of Reinhard Goebel on viola instead of his normal violin. I suspect that the acoustic balance has been achieved partly by legerdemain with the placement of mikes, but if so, I applaud the decision. This is a performance I will listen to often.

CPE Bach wrote most of his music, as he declared himself, to suit the taste of others. The Concerto for Harpsichord, Fortepiano, and Orchestra was an exception; it was his last orchestral composition and something of a personal summary of his art. Certainly he pulls out all the stops for melodic novelty. By ping-ponging back and forth between the two keyboard instruments, and by giving each in turn the most curlicue arpeggios, CPE creates a zone of virtuosic excitement for his soloists that balances the boisterous simplicity of his orchestra of strings, flutes, and horns. A modern listener, with ex post facto knowledge of the approaching oblivion of the harpsichord, will be intrigued by the similarities of sound from CPE's two keyboards. Stylistically, the fortepiano is still playing harpsichord music, barely beginning to find its own character, yet the harpsichord, with its lighter timbre and crisper silences between notes, seems almost eager to fade into an echo.

It's odd that Reinhard Goebel has chosen a flute concerto to represent the work of Wilhelm Friedemann Bach, since CPE spent most of his career dishing up flute music to satiate his royal master, Frederick the Great, by all accounts a good enough flautist not to embarrass himself in his own court. Goebel declares in his notes that this concerto is a piece that does not "readily disclose itself to an audience... a wonderful learned `academy piece' - for a concert of expert players." In short, a piece that needs repeated listenings an time to grow on you. The Sinfonia Concertante by the youngest Bach brother, Johann Christian, is exactly the opposite, a piece that delivers its full charm at first listening, a joyful, balletic romp in A major.

The disciplined virtuosity of Musica Antiqua Koeln has never been more apparent than in these four concerti, each one challenging both stylistically and technically, bridging as they do the aesthetic divide between late Baroque classicism and early modern romanticism. One can hear the quasi-Darwinian struggle for survival of the older instruments - not only the harpsichord but also the keyless winds and the arc-bowed strings - called upon to perform the new idiom of public concerts. No other ensemble plays this repertoire more securely. Above all, this is intelligent music of historical importance, played with ravishing skill by musicians who truly believe in its worth.
続きを読む
10人のお客様がこれが役に立ったと考えています
違反を報告
レビュー を日本語に翻訳する

Dino
5つ星のうち5.0 Wonderful performance; wonderful recording
2014年4月11日にアメリカ合衆国でレビュー済み
Amazonで購入
I appreciate the double concerto of pianoforte and harpsichord most. The performance is precise and exciting. The recording has great presence and imaging.

Everything on this collection is top drawer.
続きを読む
違反を報告
レビュー を日本語に翻訳する