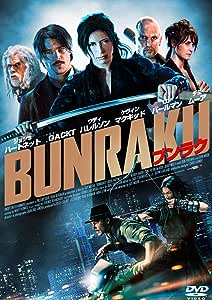 Amazon Customer
5つ星のうち5.0 The best film I've seen in quite a while
2012年1月20日に英国でレビュー済み
Amazonで購入
Okay, I'll admit the plot itself is not terribly original. It reminds me of a pastiche of western plots, yet the way it's all put together is fresh, and the comic-style imagery works really well with it. Bunraku is different, it's bold, and it doesn't take itself too seriously - all of those are big pluses with me. Add Japanese superstar Gackt and Ron Perlman to the ingredients, and it was well on the way to winning me over from the very beginning. I had't seen Josh Hartnett before, but I thought he did a good job as one of the two drifters. My admiration, however, goes entirely to Gaku-sama and Ron Perlman for their brilliant performances. Gackt is simply delightful as the idealistic warrior Yoshi, and Perlman is a superb villain, to such an extent that you keep wavering between hating his guts, and actually sympathising with him (at least I did). I have to also mention Woody Harrelson, whose interraction with Yoshi and Hartnett's drifter provided plenty of comic, as well as a few poignant, moments. Last, but not least, I must mention the fighting, as there's a lot of it. Now, I don't care much for fight scenes, but even so, I wasn't bored at all, not least due to the fact that there always seemed to be a slight comic element to them which made you switch from thinking "Wow, that was cool!" to chuckling in a matter of seconds.

To sum all up, if you like quirky and very visual films, you'll like Bunraku. And even if it fails to impress you as much as it impressed me, I promise you won't regret the time you spent watching it. The only downside can think of is the lack of bonus features (if you don't count the trailer, which I don't), at least on the DVD. Not sure if the BlueRay edition has more extras.
続きを読む
違反を報告
レビュー を日本語に翻訳する