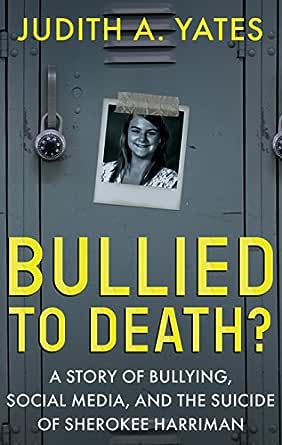 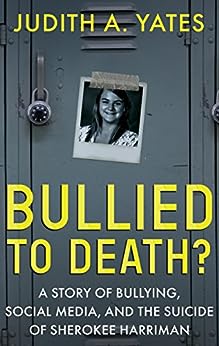 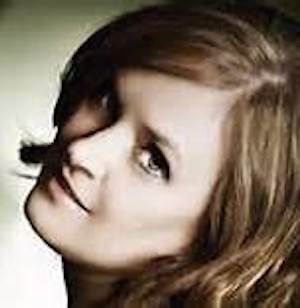 BULLIED TO DEATH: A Story Of Bullying, Social Media, And The Suicide Of Sherokee Harriman (English Edition) Kindle版

On September 5, 2015, in a public park in LaVergne, Tennessee, fourteen-year-old Sherokee Harriman drove a kitchen knife into her stomach as other teens watched in horror. Despite attempts to save her, the girl died, and the coroner ruled it a “suicide.” But was it? Or was it a crime perpetuated by other teens who had bullied her?

Sherokee’s short life and tragic death created a national media and social media frenzy much of it centered on sensationalism rather than the truth. Meanwhile in LaVergne, the community sought answers to questions about who, if anyone, should be held criminally responsible for “bullying.”

Award-winning author and criminologist Judith A. Yates peels back the layers of sensational news coverage surrounding a girl’s death, and in context with national interest in the phenomenon of internet bullying tries to answer the question of whether Sherokee Harriman was BULLIED TO DEATH.

Criminologist Judith A. Yates is the award-winning author of "When Nashville Bled" and "The Devil You Know" and Editor of True Crime: Case Files Magazine. She has appeared on numerous talk shows and has lectured, conducted training, and made guest speaking appearances across the United States. After a lifetime of working in law enforcement, Ms. Yates lives in Kentucky.

To start her agenda off she introduces the suicide in the prologue and then spends the next seventy five percent of the book telling you about all the things Sherokee did wrong in her short life and how she was a disturbed child ignoring the bullying she suffered at school.

At the seventy five percent mark she finally tells you about how Sherokee is constantly called ho and b*** at school, stinky and fat but oh that didn't really matter because Sherokee was mentally disturbed and "over-reacted to taunts." (Are you angry yet? If you care about bullying you should be.)

Then the author has the unmitigated gall to list a number of other children and teens known to have killed themselves because of bullying and say "really the bullying wasn't much of a cause because the child had a history of depression." She mentions Rebecca Sedwick as one of these examples and while admitting that kids at school repeatedly posted online that Rebecca should drink bleach, that nobody liked her, so she should kill herself and called the twelve year old a wh*re according to the author of this book that didn't really matter or influence her to suicide because the police described Rebecca as a "very fragile child." (Back to the victim blaming we had with claiming Sherokee brought in on herself by "over-reacting" to verbal abuse.) The author then tells us how Rebecca had diagnosed depression and a bad relationship with her father as further proof that we shouldn't blame bullying.

THEN this author has the audacity to conclude that modern cyber bullying really isn't bad when you consider that people in Ancient Greece were lucky if they lived until age 20 and children in the industrial revolution were made to work in factories! And the poor teens of the 1950s had to suffer the trauma of bomb drills. Seriously she says all this as more of her argument that bullying doesn't matter and shouldn't be taken that seriously!

To me the author seems like someone who bullied at school or stood by and watched bullying as a child and teen and wants to tell the world it's really not that serious to make herself feel better for her own past actions.

This book isn't going to be the kind of book you want at all if you were expecting a tale about the record of the actual bullying that Sherokee and other 12 and 13 year olds the author mentioned endured as she glosses over it and tries to blame everything else and put forward her sick argument that bullying doesn't really influence anyone to suicide.

Rosalie Haas
5つ星のうち5.0 Compelling
2019年7月31日 - (Amazon.com)
Amazonで購入
This is a compelling read and left me with so many mixed reactions. One reviewer was clearly angry that the author seemed to brush off the idea that it was solely bullying that took this young girl's life. I disagree. Indeed she was tormented by cowardly bullies (who, by the way, never seem to have the guts to bully without an audience). But we must add in serious mental health issues. She herself could be a bully, particularly against her sister. Her mind flipped from feeling loved by friends and family to feeling she didn't have a friend in the world. She seemed to forget she always had Katie. She lost boyfriends, but at least she found them in the first place.

We must add in the abuse she suffered at home. Her mother, it seems, became the most attentive and loving mother one could ask for. Sounds self-serving to me, since this version of her love apparently comes from the woman herself.

Finally, as incredibly immature as Sherokee was, I don't believe she considered death to be the outcome of her actions that day. I think she was once again going to "get her own way" by performing a suicidal act and then everyone would feel sorry for her instead of contemptuous.

My opinion here may not be popular, but she was a very sick kid. Lots of factors played into her tragic death.
続きを読む
2人のお客様がこれが役に立ったと考えています
レビュー を日本語に翻訳する

Lorrie Phillippe
5つ星のうち5.0 There's so much good to say about this book that I can't put it in one review.
2018年8月10日 - (Amazon.com)
Amazonで購入
This is such an amazing book. Once I started reading it, I had trouble stopping. I was pulled into the sad life of Sherokee Harriman, a 14 year old girl who committed suicide.
When I started this book I assumed it was a story about a girl who was bullied to death, it's so much more than that.
While there's no doubt that Sherokee was bullied ruthlessly, I learned that there were a lifetime of other stressors that culminated on that fateful day and set off a series of events that caused her to take her own life.
Judith Yates is an amazing author, who took the time to get to know the people in this story. She went way beyond what most authors do while writing a book. She researched and listed places for young people to get help with all of their problems, whether it be mental health, physical, psychological or cyber bullying.
There is help available for those who need it.
This is a book I would recommend for everyone to read. It's sad but also very educational.
続きを読む
2人のお客様がこれが役に立ったと考えています
レビュー を日本語に翻訳する

Kathleen C. Sprayberry
5つ星のうち3.0 Tackles a tough subject
2018年10月1日 - (Amazon.com)
Amazonで購入
Kudos to Judith A. Yates for writing such a compelling book on this subject. Bullying has long been a difficult problem to overcome in this country.

While the story was compelling and moved along mostly at a smooth pace, I found the lack of good editing and insertion of long chapters that were about defining certain elements and not related to the story very distracting. Wildblue Press needs to reexamine this book and provide the reader with an experience they can take away from this horrible event rather than the memory of the places where the reader stumbled over improper words, misspellings, and missing words.
続きを読む
2人のお客様がこれが役に立ったと考えています
レビュー を日本語に翻訳する