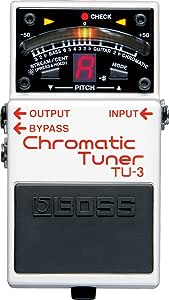 Richard
5つ星のうち5.0 Loads of tuning modes, can be used to route audio, and can power other pedals! :)
2018年4月22日に英国でレビュー済み
Amazonで購入
I see what all the fuss is about the TU-3 tuner pedal. I've held off buying one for ages and finally decided I needed to finish my pedal board with one.

It has multiple tuning modes and display options, will easily deal with 7-string guitars and 5-string basses, and will allow drop tunings directly from the front panel using the mode control.

One creative use I intend to put it to is to act as a signal splitter for effects pedals since there are two outputs, "output" and "bypass". This means I can have two FX chains behind it, in my case one vintage and one modern.

It runs from standard 9v PP3 batteries or from a wall-wart power supply that is *not* provided. Fortunately for me, I always intended to power it from a power brick (in my case a TrueTone 1Spot) using the adapter cable that TrueTone provides, attached to an outlet that can provide 12v. The fact that it can pass along power to other Boss pedals is a major plus, and it will even feel older Boss pedals because I believe it steps down the power to conform to older pedals. It certainly powers my old compressor/sustainer pedal also made by Boss, using a simple daisychain cable.

The display can be switched to a higher brightness so that it's visible in sunlight, but the power draw of the pedal really leaps up if you do, from 30 milliamps to 85 milliamps. If you're daisychaining other Boss pedals using the TU-3's pass-thru power you'll need to bear in mind that there will be less power available for those pedals in the daisychain. Similarly you will need to allow for this if you're using a power brick PSU and switch to high brightness now and then.

The enclosure is like all Boss compact pedals - tougher than boots and with everything, especially the battery compartment, easy as anything to access. It comes with a battery installed that has been used for testing. You're recommended to keep a battery in there (it isn't being used if there's no instrument cable in the input) but since I don't play live I just removed it.

How does it lock on to the notes? Phenomenally well, quick even on the low B on both 7-string guitar and 5-string bass. I have a Korg Pitchblack rack tuner that I've long considered to be the canines cojones, and this definitely is the equal of that unit, and takes the capabilities a bit further with features like the various flatting options.

It's used all the time, and the option to use it on two signal paths makes some rudimentary pedal routing hacks available.
続きを読む
8人のお客様がこれが役に立ったと考えています
違反を報告
レビュー を日本語に翻訳する

Does what it says on the can. No bones about it but lovely scales.

____
5つ星のうち5.0 A must have for any pedalboard
2017年4月14日にアメリカ合衆国でレビュー済み
Amazonで購入
There is a reason you see this on so many pedalboards, mine included. I gigged with a Sabine tuner for about 10 years and I got this because it has a narrower profile and I can daisy chain power from it. I love love love the bypass option, letting me keep this on all the time and use my volume pedal as a mute switch. The tuner reacts very quickly and clearly indicates the pitch and when your tuning is on target. Works great on stage or at home.

Bottom line:
For something as blah as a tuner you will love having this on your board.
続きを読む
16人のお客様がこれが役に立ったと考えています
違反を報告
レビュー を日本語に翻訳する

Conrad
5つ星のうち1.0 No power supply
2020年1月7日にアメリカ合衆国でレビュー済み
Amazonで購入
If I pay $100 for a tuner, it better include a power supply.