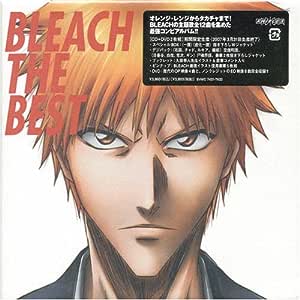 Aris
5つ星のうち5.0 Looks like brand new!
2019年3月11日に日本でレビュー済み
Amazonで購入
I'm so happy that I now have this CD after such a long time. Thank you.
続きを読む

Of these tracks the second opening theme `D-technolife' is my favourite and probably ranks as one of my all time favourite songs. The other tracks on this CD are almost as good and after listening to the CD a few times, even those songs that I didn't like when I first heard them such as `TONIGHT, TONIGHT, TONIGHT' and `MOVING!!' are definitely growing on me.

Also included with this CD is a DVD that includes the opening and closing credit sequences for each of the tracks included on the CD. I must admit that these are some of my favourite anime credits sequences and I was very happy that they were included with the CD.

This album is definitely a must buy for any Bleach fan.
続きを読む
8人のお客様がこれが役に立ったと考えています
違反を報告
レビュー を日本語に翻訳する

Marqus Antoine
5つ星のうち4.0 bleeeach the Best
2013年5月31日にカナダでレビュー済み
Amazonで購入
It was well packaged and I like the songs but the dvd disc didnt work .. I still luv bleach and the music on the anime so 4/5 (=
続きを読む
違反を報告
レビュー を日本語に翻訳する

Solo Knight
5つ星のうち5.0 Now I feel like number one!
2020年6月26日にアメリカ合衆国でレビュー済み
Amazonで購入
Great sound quality. I like all of the songs from this show, always gets me pumped. I got it signed by Johnny Bosch at a comic book convention. I like anime soundtracks, they deliver new types of music to get into.
続きを読む
違反を報告
レビュー を日本語に翻訳する