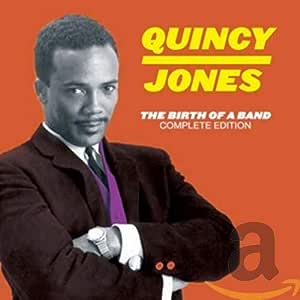 THE BIRTH OF A BAND - COMPLETE EDITION CD, インポート

Joost Kiefte
5つ星のうち4.0 Original issue with some trite extras
2010年2月20日に英国でレビュー済み
Amazonで購入
The original Mercury "Birth of a Band" CD was issued in 1988 (that being a reissue of the LP). It was one of the first CDs I bought and I enjoyed it very much indeed (and I still do). For some reason or other I never got around to buying the yellow sleeved sequel "Birth of a Band vol. 2", so when this complete edition appeared (and at budget price) I wasted no time to order it. But I was slightly disappointed. No, not by the sound quality or the obvious care and attention that had gone in the production (complete original liner notes, extra new liner notes, personnel listings and recording dates), but in the 'extra' music (in other words, the contents of vol. 2).
Whereas vol 1. contained serious and very good, straightforward and hard hitting big band jazz, vol 2. obviously was an attempt to attract another segment of the record buying public. Potboilers like "Syncopated Clock", "Choo Choo Ch'Boogie", "The Preacher", "Marchin'the Blues" are busily arranged affairs, burdened with at times rather cheap tricks and stereotypical effects, that obviously hold an appeal for a less sophisticated public, but that make me shake my head in wonder and disbelief. The tunes are well played of course and they all contain a modicum of jazz, but they are miles removed from items like "The Midnight Sun Will Never Set" (a beautiful Kenny Burrell feature), "Moanin'", "Along Came Betty", "Whisper Not" and the moving "I Remember Clifford". These items should really not be thrown together on one CD. So should you already own the original "Birth of a Band vol. 1" and are happy with it, there is really no need to acquire this CD (save perhaps for a few alternate takes). If you don't, then this CD may be a good idea, but skip no. 2, 3, 4, 6, 7, 8, 22, 23 and 24.

J. Bowers
5つ星のうち1.0 Quincy Jones, Birth of a Band
2010年6月8日にアメリカ合衆国でレビュー済み
Amazonで購入
I'd heard and enjoyed the title selection, "Birth of a Band," years ago, so I took a chance that the full album would be comprised of big-band Jazz on that order. Wrong. With few exceptions, it's commercial claptrap, apparently recorded after Quincy found there was more money in pop / soul music than in Jazz. The one star is for "Birth of a Band," a blistering flag-waver with a typically excellent solo by Zoot Sims. The rest can be filed under "pop." -- Jack Bowers
続きを読む
3人のお客様がこれが役に立ったと考えています
役に立った
フィードバックを送信中...
フィードバックをお寄せいただきありがとうございます。
申し訳ありませんが、お客様の投票の記録に失敗しました。もう一度試してください。
違反を報告
レビュー を日本語に翻訳する