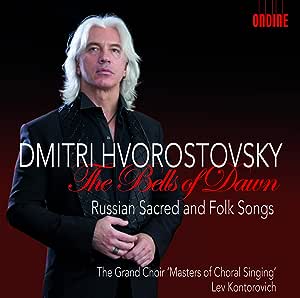 THE BELLS OF DAWN CD, インポート

maria zentai
5つ星のうち5.0 ... Celebration of Vox Humana A well-chosen title and a great album: The Bells of Dawn is a celebration ...
2014年10月16日に英国でレビュー済み
Amazonで購入
A Celebration of Vox Humana
A well-chosen title and a great album: The Bells of Dawn is a celebration of Vox Humana, a feast for the ear and asylum for the soul. A very special,completely a cappella program, featuring Dmitri Hvorostovsky's mellow bariton and the rich, refined sound of the Kontorovich Choir under the lead of Lev Kontorovich.
The first half of the program, the sacred songs exude a solemn spirituality which can be felt even if someone does not know what sort of music this is. When I close my eyes it evokes an image in my mind of hundreds of candles burning with a warm light in the darkness. Soloist and choir seem to have a natural God-given chemistry, their voices blend perfectly and enhance each other's beauty.
In spite of the mostly slow even tempo, the character of the sacred songs varies on a wide range from the intimacy of praying to the resounding triumph of faith. Hvorostovsky sings with the same ease, elegance and dedication as in his operatic or art song repertoire. His unique timbre as beautiful as ever, he elaborates every note, every line with loving care and mastership. There is a soothing, comforting, almost transcendental tenderness in the way he and the choir sing Hear My Prayer - the recurring "Zhertva vechernaya" will haunt you long after the last soft note rang out. And when his voice soars up in RazBOYnika..." (The Wise Thief) one feels that the heavens are open.
The emotionality kept at bay (or rather transformed into devotion) in the sacred songs takes over in the second part of the album. Loneliness and unrequited love prevails - or the nameless sorrow of the weary path we all tread. With their free associations, highly repetitive nature, and simplicity of text and tune, some of the songs sound more archaic - They Do Not Let Masha, Farewell, My Joy some of the songs sound more archaic - They Do Not Let Masha, Farewell, My Joy!, The Fog Has Fallen Onto the Field and Oh, Night. Hvorostovsky performs three of these songs alone, without the choir. He takes a high risk by doing so but the result justifies him. He identifies with the folk singer, leaves academic singing behind, becomes more earth-bound and gives deeply felt, moving renditions with dark melancholy and gripping emotional intensity - for me, these are the highlights of the album. Also, one can hear that his legendary legatos and long sustained notes root back in his musical heritage, in the world of the Russian folksong.
A lighter mood, even a glimpse of humour appears in A Snowstorm Sweeps the Street (the enamoured young man begs the beloved girl to stop - in the middle of the snowstorm).
The booklet contains the transcription of the Russian text and also the English translations. An endearing feature of the Russian language cannot be translated though: the habit of the "caressing diminutive": doroga" softened into dorozhka" and dorozhenka", golova" into golovushka", noch" into nochenka", pesok" into pesochek", mat' into matushka" in the folk songs.
Solemn colours, black and deep red dominate the coverpage, drawing the eye to Hvorostovsky's silver hair and serious concentrating face looking far away as if listening to some inner music.On the backside he is standing in the same posture but he looks at us as if inviting to join him on his spiritual journey. It is worth joining. (Congenial portraits by Pavel Antonov).

Amazon Customer
5つ星のうち5.0 Deja Vu
2019年11月17日にオーストラリアでレビュー済み
Amazonで購入
Lovely tape, Dmitri had such a beautiful voice.
Amazon, you are quick to request comments, but I have not had an answer as to Amazon being able to supply the DVD I requested,
The DVD is called Déjà Vu, recorded by APC records in RUSSIA in 2010 with Dmitri Hvorostovsky with Igor Krutoy. would like to purchase this tape, and would love an answer
Regards Michele