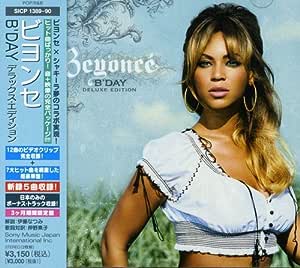 Expanded Edition of the 2006 Album, featuring 'beautiful Liar(Beyonce and Shakira)', 'if', 'flaws and All', 'get Me Bodied(Extended Mix)(Hidden Track from the Original Album)', and 'worldwide Woman'. Limited Edition, Comes with a Dvd.

Bee
5つ星のうち5.0 A great audio/visual combo
2016年6月5日に英国でレビュー済み
Amazonで購入
This is a very good album, and it comes at a good bargain. It is probably Beyonce’s best audio album to date. I like the fact that there are a number of uptempo dance tracks, with a very distinct funk element. The slow songs also sound nice.

1. Beautiful Liar – 9/10 – An unexpected collaboration, with a catchy chorus. Shakira’s subdued tremulous vocals are really nice to listen to. I like the clapping effect on the second half of the chorus. The Middle-Eastern vibe in the breakdown before the final chorus is very good.
2. Irreplaceable – 6/10 – This is a nice midtempo track and one of the more popular songs from the B’Day album, although it is my least favourite track on the album. Beyoncé sounds good on the track, though.
3. Green Light – 10/10 – This is a funky song with a catchy chorus, and a very nice arrangement. I like the repeated “go, go, go…” in the pre- and post-chorus, with Beyoncé riffing all over it. The funk breakdown at the end makes you want to get up and dance.
4. Kitty Kat – 7/10 – This is a very tongue-in-cheek slow song, and is one of the easy listen tracks on the album. I like the melodic bridge.
5. Welcome to Hollywood – 8/10 – This features an uncredited Jay-Z. I like the frantic production along with Beyoncé’s delivery. The harmonising on the track is on point.
6. Upgrade U – 8/10 – Another song with Jay-Z. The song feels very flashy, with a distinct hip hop feel. The production is really good, especially the trumpets, whistle and clapping effect employed. Jay-Z’s verse is really good, and is closely followed by Beyoncé singing in her pleasant and passionate higher register on the bridge.
7. Flaws and All – 9/10 – One of my favourite slow songs on the album. I like the crinkling effect and the melismatic soulful delivery by Beyoncé. The instrumental solo with Beyoncé vocalising over it sounds nice.
8. If – 10/10 – This is my favourite slow song on the album. It is a very passionate piano-led song, which tells a touching story. I like the subdued verse/chorus delivery and how Beyoncé unleashes her vocal power in the latter half of the song.
9. Get Me Bodied (Extended Mix) – 10/10 – This is a great bouncy dance track, with frantic handclaps and a hype man shouting out “hey” and “jump” in the background. I like how the song transitions from verse to chorus. The bridge is great, as is the breakdown with Beyoncé calling out for different steps to be performed.
10. Freakum Dress – 10/10 – This is my joint-favourite along with “Suga Mama”. Another great funk track with very prominent cymbals. Beyoncé’s voice flows with the instrumentals nicely. I like how her voice steadily climbs all the way to the bridge and she proceeds to sing the rest of it in her upper register.
11. Suga Mama – 10/10 – The entire song is sung in Beyoncé’s upper register, with Beyoncé addressing her love interest. It has a very catchy post-chorus – “Sit on Mama lap yeah, yeah; Come sit on Mama lap yeah”. An overall great funk song.
12. Déjà Vu – 8/10 – This is a nice uptempo song with funk elements similar to “Crazy in Love” from Beyoncé’s debut album. It, however, is not as good. I still like the blaring horns on the track, Jay-Z’s rap and the bridge.
13. Ring the Alarm – 8/10 – This is a good song, but I find Beyoncé’s vocal delivery to be just a tad too aggressive. I like when she calms down on the bridge. The siren effect in the background throughout the song is also good.
14. Resentment – 8/10 – Another song with a bit of a crinkly effect. I like how it feels a bit like an old-school soul/R&B track. I like the key change on the second half of the chorus and Beyoncé’s adlibs. Her vocal delivery on the adlibs feels strained, though.
15. Listen (from Dreamgirls) – 8/10 – This carries on the heartbreak trend which the previous two tracks serve in earnest. Gritty vocal perfection, especially on the chorus and the bridge.
16. World Wide Woman – 8/10 – I like the swelling piano-driven intro, and how it quickly transforms into a hip hop track. A lot of computer-based similes employed throughout the song, which is an overall nice listen.
17. Check On It – 10/10 – I loved this song from the very first listen. Slim Thug and Bun B are great additions to the track. The entire song is very catchy. It is another hip hop song similar to “Upgrade U”. The production is great, with the snare drums, jingly bells and whistles employed.
18. Amor Gitano – 9/10 – This song features Alejandro Fernandéz. A very easy listen Latin song, with both voices blending nicely.
19. Beautiful Liar (Remix) – 9/10 – This is similar to the original song.

The fact that the album comes with the B’Day Anthology video album is just perfect. The video album contains visually-appealing music videos for the majority of the tracks on the audio album.
続きを読む
違反を報告
レビュー を日本語に翻訳する

AHM
5つ星のうち5.0 Wonderful
2018年6月26日に英国でレビュー済み
Amazonで購入
I bought this when my old disc got scratched up. This album makes me miss the old Beyonce sometimes.