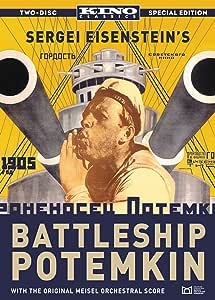 bernie (xyzzy)
5つ星のうち5.0 Worth it for the still pictures alone.
2014年4月4日
形式: Blu-ray
The Classic Film Scripts series is a must for any serious videophile. These books separate the video into its basic constituencies and allow one to understand what the subliminal shots are supposed to portray. Even the background sounds are described.

The contents include a history by Andrew Sinclair, An introduction by Sergei Eisenstein, credits, cast and the actual screenplay. There are plenty of still photos. The film is still available so you will want to read this first.

More than just a reference you will become intrigued as you are reading.

M. A. Seifter
5つ星のうち5.0 Magnificent film by a great director
2018年7月23日 - (Amazon.com)
Amazonで購入
Excellent movie. This movie was a pioneer achievement for Russian/Soviet cinema. Eisenstein's 1925 film is well worth viewing today, for its cinematic brilliance, as well as its back view of a transitional time of Soviet culture. This film established Eisenstein's international fame as a film director, and belongs in the same ranks as his other great films of this era: "Ivan the Terrible", Alexander Nevski", and "October".
続きを読む
3人のお客様がこれが役に立ったと考えています
レビュー を日本語に翻訳する

Mike
5つ星のうち4.0 This rare gen is worth every penny
2015年2月17日 - (Amazon.com)
Amazonで購入
Still powerful and entertaining today. This is a rare gem and worth every penny. The editing is ahead of its time, and the violence would make even Coppola shutter. The scene depicting the massacre on the Odessa steps obviously inspired the train station scene in Brian De Palma's 1987 "The Untouchables." The actors are captivating, the story is real (depicts a 1905 mutiny), and the film print is amazingly clear, too. If you fancy yourself a student of cinema, you must see this film.
続きを読む
8人のお客様がこれが役に立ったと考えています
レビュー を日本語に翻訳する

That is a claim that was hard to swallow especially since this was a silent film. In todays world, sitting and watching subtitles and a black and white 1925 Standard Ratio film seems meaningless and a waste of time.

Well let me tell you this film has showed up on every Best Film list ever made including "1001 Movies you must see before you die" so I took the Challenge. First I saw the VHS version and struggled to watch this classic and the poor quality (picture and sound) was horrible!!! So I wondered how could this film be rated so highly by ALL THE EXPERTS.

ATTENTION: The HD Blu-ray Home Theater (Large 9' Projection Screen) Environment with DTS-HD Master Audio 5.1 does the trick. Especially since "Battleship Potemkin" has been remastered to the closest version of it's original 1925 premier with the Music Score by Edmund Meisel (1926) a full orchestra sound track. OUTSTANDING!!!!

Kino International gets 5 STARS in presenting this movie at its finest!!!!!!

The picture photography, clarity, story telling, direction, editing is perfect!!! Remember this was 1925. You get to see and hear it better than the cinema version from 1925, thanks to this Blu-ray presentation. The movie delivers a timeless message against war in a very touching way. Don't miss this classic film and enjoy its wonderful story and the genius of Russian Director Sergei M. Eisenstein.

NOTE: Since this is a very rare experience if at all possible rent it first!!! Then determine if you would want this as a HD Blu-ray library addition. I have it and have watched 3 times already because of its greatness, I do agree now with this Blu-ray version that "Battleship Potemkin" is one of the great films of all times. Enjoy.
続きを読む
11人のお客様がこれが役に立ったと考えています
レビュー を日本語に翻訳する

menelaosk
5つ星のうち5.0 Film school 101: Eisenstein and filmaking
2011年12月31日 - (Amazon.com)
形式: Blu-rayAmazonで購入
No this was not a class I ever took, though I am willing to bet it is pretty standard fare in many a film school. This is perhaps one of the best films ever put together, much like a Greek tragedy. The simple folks who become the dramatis personae are there, the "set" is there, the compelling story is there, the inexorable march, with accompanying ramping of the excitement, toward the resolution of the story is there, the great music score is there, and all that is packaged within 70 minutes or so... I'd like to see Hollywood folk pull a stunt like that today... Ha!. Be that as it may, this is a 1925 movie that looks like it might as well have been shot yesterday on Ilford 100 film stock. I do not know how such amazing restoration can be accomplished, but the visual quality/clarity of the picture in this bluray is beyond words. The complete Metropolis bluray (about which much has been written already) pales by comparison. I really do think the Academy of Motion Pictures should institute an Oscar for historical film restoration work. What we see in this bluray is, in many ways, film history hopefully preserved forever. Now can someone please perform the same restoration trick to Ivan the Terrible (both parts) and Alexander Nevsky?
続きを読む
5人のお客様がこれが役に立ったと考えています
レビュー を日本語に翻訳する

James mcgonigle
5つ星のうち5.0 A classic of cutting, shot choices, editing
2012年10月9日 - (Amazon.com)
Amazonで購入
When I taught film classes I always included Potemkin as one of the best examples of a classic of cutting, shot choices, editing...the famous Odessa Steps sequence is a masterpiece. As students were viewing the film, they often forgot they were watching a silent movie. I showed them the print with original Edmund Meisel orchestral score which causes you literally to hear the shots, explosions, cries of the distraught peasants, etc....It's funny that today this film's score can stand as excellent example of complementing many of today's action films, such as The Avengers or maybe the recent Battleship. I think this film stands as a compendium of best techniques in filmmaking.[Amazon Certified Purchase]
続きを読む
6人のお客様がこれが役に立ったと考えています
レビュー を日本語に翻訳する
Amazon.comのカスタマーレビューを見る(191) 5つ星のうち4.4
Amazonプライム会員ならお急ぎ便、日時指定便が使い放題
さらに、映画もTV番組も見放題。200万曲が聴き放題 。クラウドに好きなだけ写真も保存可能。
> プライムを無料で試す