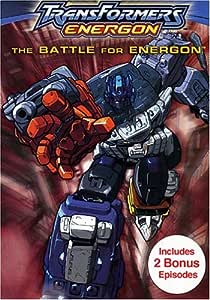 bmc870
5つ星のうち5.0 transformers
2013年1月27日 - (Amazon.com)
Amazonで購入
too cool - was received safely and enjoyed - thanks and sorry for the delay in letting you know -
続きを読む
レビュー を日本語に翻訳する

Chris Angelique
5つ星のうち3.0 A rocky first few episodes but potential
2004年11月2日 - (Amazon.com)
Like the early episodes of Armada Transformers Energon has potential to behold quality. The idea is that it is now 20 years since the destruction of Unicron and the Autobots and Decepticons (Minus Megatron) have formed an alliance and are living peacefully. They have teamed up with Omnicons who search for Energon. However they soon become attacked by a new threat of Terrorcons who seek out energon to revive Unicron. The leader of the Terrorcons is a quinteson by then name of Alpha Q and his pawn Scorpanoc (Origionally introduced in the final Season of the Origional Transformers).

Meanwhile so it's not all about Robots and so the Transformers have some Human help there is now a kid named Kicker who has a form of ESP that allows him to sense Energon and other strange Energies. The series also tries to revive Classic Favorite Ironhide as young rookie who becomes somewhat reluctant friends with Kicker.

There are complaints about this however. The Early episodes suffer from weak villanous characters and the Terrorcons are just robotic Hawks and Wolves. Scorponac is an annoying villian who is no Megatron, or even Starscream for that matter.

However with a little fine tuning this series could last a few seasons and hold a special place in fans hearts (as I recall similar gripes were made about Beast Wars and now it is recalled fondly by many). Overall and I am saying this as a Transfan, give this series some time, the current style in animation for all series trying to reach a large audience is Anime style and for most it has become the norm. Armada hit gold with the final set of Episodes and this one will hopefully this one will have a nice succesful run for this young Generation (which is the Target Audience)