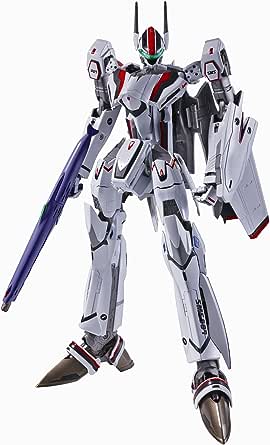 C. Jones
5つ星のうち4.0 so you can position him how you like. Have a care
2015年6月5日にアメリカ合衆国でレビュー済み
Amazonで購入
Alrighty, so before I start this, I must apologize. I stated that I had already reviewed this product in my review for Luca's RVF-25, and it seems that said statement was false. So, now I shall remedy that oversight.
To begin, this product only suffers one major flaw, and it seems common to all of the Messiahs. The shoulder joint that pivots to move the arm into place for Gerwalk and robot modes is loose, making some more dynamic poses difficult, if not impossible. However, with some finagling, you CAN find a way to make these poses happen. Just expect to be at it for several minutes, possibly more.
The pilot figure is small enough that you don't see the red highlights everywhere they should appear, but the shoulder ones (I.E., most visible ones) are as they should be. If you're a collector of the Yamato Valkyries in this scale, you'll likely observe that the pilot figurine is rather less bulky than the ones included with the Yamato toys.
There is a second pilot figurine, Alto in his EX-gear making the so-called "airplane" gesture which he famously made in the final battle to call his Valkyrie to him. This figurine also has a length of black wire and a clear plastic base, so you can position him how you like. Have a care, though, because my version at least is prone to falling off the wire from time to time.
If this is your first Messiah Valkyrie, as it was mine, a word of caution about the transformation. While it is not overly complex, attempting to pivot the mounting for the hips up and rearward to lock them into robot mode is cumbersome, and they will flop around a bit. Take care here, as I get the impression that letting them swing too freely might break the toy.
There's a little bit of a stress mark on the back segment that holds the wings, so I've been treating that particular element like cracked glass. Caution never hurt anyone, after all.
As far as paint goes? Not much to complain of here, save if you prefer the panel lines to already be painted. They are not. I will, however, dock Bandai a ton of points for a simple oversight, though: they failed to paint the engine intakes under the removable cowlings. This is true of all of the Messiahs, so I'm going to just chalk that up to laziness.
All in all, if you want a very fine representation of the VF-25, this one is all for you.
For those who aren't aware, this figure in particular has three accessory packs available for it: Super Pack, Armor Pack, and Tornado Pack. All cost extra, of course, but the payoff is a very imposing-looking fighter.
続きを読む
2人のお客様がこれが役に立ったと考えています
役に立った
フィードバックを送信中...
フィードバックをお寄せいただきありがとうございます。
申し訳ありませんが、お客様の投票の記録に失敗しました。もう一度試してください。
違反を報告
レビュー を日本語に翻訳する

Antonio Sommerio
5つ星のうち5.0 Such detail!!!
2015年6月10日にアメリカ合衆国でレビュー済み
Amazonで購入
This thing is beautiful. It was a tad bigger than I imagined it would be but that's a great thing! I'm so pleased with this. I'm totally terrified to transform it but I'll gain some courage later.
A must have if you're a Macross Frontier fan.
続きを読む

NohPenName
5つ星のうち5.0 High Quality!
2015年10月5日にアメリカ合衆国でレビュー済み
Amazonで購入
These renewal figures are great. The detail and construction is strong using metal in places where it is needed. It comes with a stand and is pre-painted right out of the box.
続きを読む

Pat Samson
5つ星のうち5.0 Quality
2014年9月10日にアメリカ合衆国でレビュー済み
Amazonで購入
Beautiful figure, good heft, good quality plastics. Obviously this is a collector's toy, so the plastic is very rigid (read: brittle) for better accuracy. It's a good improvement over the original version, with a proper self extending neck and articulated hands that make the pre-pose ones feel a bit redundant. My only complaint is the use of diecast in shoulder parts, there's several steps in the transformation where the parts can be rubbed against something else and that can chip paint off, not so good. Thankfully several panels around the head area can be taken off if you're nervous about scuffing paint during transformation.

Comes with the pilot, a re-configurable display stand, the pilot's space suit, knife, extending battle pod gun, and some extra pre-posed hands (which I kept in their bag) The space suit is fixed posed and attaches to a black wire and then to a stand, so you can get some zero-G-like positions. The knife and gun have their places in all three modes, meaning you don't have accessories just lying around, which is nice. The pilot is meant to only fit in his seat, but has good paint apps for the size.

Articulation is as expected very nice, the poseable hands and extra elbow come in handy to get some more dynamic poses. The jointed feet and weight distribution make posing the battroid mode on a flat surface without using the stand not only possible, but fairly easy. Gerwalk will require a stand, and the Fighter mode can do either with its deployable landing gear that's much easier to access than previous versions of the figure. The cockpit features an optional rear seat that can fold out, if you wish to fit a second figure such as Ranka in there.

I'm very satisfied with the attention to detail present and the solid-feel of the transformation and modes. I was very lucky to find the figure here at original MSRP so late after release.
続きを読む
4人のお客様がこれが役に立ったと考えています
役に立った
フィードバックを送信中...
フィードバックをお寄せいただきありがとうございます。
申し訳ありませんが、お客様の投票の記録に失敗しました。もう一度試してください。
違反を報告
レビュー を日本語に翻訳する