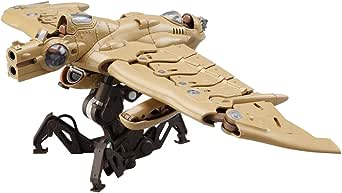 Bobak Haeri
5つ星のうち4.0 Well detailed, a bit small, and very different from the ship in the movie/book --but it works!
2011年7月8日にアメリカ合衆国でレビュー済み
Amazonで購入
Let's get the obvious point out of the way for fans of Nausicaa (manga or movie): this ship has significant design differences from the Gunship in either version. Bandai claims Hayao Miyazaki had input in this design, and I find the claim believable: It's been over 25 years since he first drew the Gunship and, just as the manga evolved over the 12 years he wrote it, I'm sure his ideas for the ship's design did as well. So while the changes make the ship different, it seems to better follow the closer harmony with nature possessed by the Valley of the Wind. Think of it as the Gunship Mark II.

Let's first cover a few of those differences (I'm looking with comic and film clips at my side):

-- In comic/film versions, the only point of articulation in the wings (other than the flaps) are simple hinges for folding them up for storage like a plane on an aircraft-carrier. This new version by Bandai trades that for the ability to spread out like a set of mechanical bird's wings. It looks great and certainly takes the bird motif to the next level.

-- The four dimples on the top of the ship, located between the two cockpits, have been replaced with two, longer and sleeker intakes. Again, this makes the model more aesthetically pleasing. I'd looked at pictures of some of the older models of the Gunship (which were more accurate to the comic/film version), and they looked more awkward in real life than this design.

-- Instead of a half-dozen jets in the wing, there are two larger jets in the rear/bottom of the central fuselage. The main engine also hangs just below the fuselage, making the Gunship look more like a modern fighter jet. This makes sense now the the wings spread out in a way that would make jets on them not work correctly. It makes the ship look pretty sharp.

-- There are numerous other small changes throughout the design, but I'd say they all work in making the model more visually pleasing. The bottom line on these is this ship seems like something Miyazaki would approve and have designed himself.

*** Moving on to the strengths of this model:

-- The detailing is exceptional for an off-the-shelf plastic model. This ship has great shelf appeal. The molding and the paint job within the tiny cockpits is a prime example of this.

-- Despite all the changes enumerated above, there is no doubt that this is the Gunship of the Valley of the Wind. It keeps all the ship's central hallmarks: the Ohmu lens windows on the side of the cockpit, the double barrel gun in the nose, the two cockpits, the hooking shape of the tail (which was reduced a bit to make it work in harmony with the new engine placement), and the unique landing gear design on the wing.

-- The new wings looks great both when folded in or expanded out; the latter gives the ship a dramatic look like a bird getting read to land. The design does a good job of still looking totally mechanical in line with the worlds that Miyazaki likes to create for his sci-fi works.

-- There is good amount of articulation in the ship; exactly what you'd expect.

-- The box itself is very handsome: it looks like a book and has excellent design on its own.

-- The biggest issue is the Gunship's relationship to the base. While the base is nice to look at, they didn't design it to match the bottom of the plane very well. There are no fasteners; it relies on gravity to keep the ship in place. That wouldn't automatically be an issue, but the problem I noticed is the spots on the base where the ship is supposed to rest on don't smoothly correspond to any spot on the fuselage. The base has four points, in more or less a square, to rest the ship on, but because of the protrusion of the ship's engine on the underside of the plane, only three of those spots are ever in contact with the plane at any one time. This means the plane isn't entirely stable when resting on the base. This is a clear engineering/design flaw on Bandai's part and really limits the positions ship can be set in. It seems they designed the base for the version of the Gunship in the comic/film (with a flat bottom) rather than the redesign which place the engine down there.

-- The wings are so complex that they can be a little tricky to fold back together. Don't force them as this is still plastic. They've used clear plastic in between joints to try and guide it to close easier, but I still found that you need to be careful to fold everything --it isn't as smooth as it could have been.

-- While it seems obvious, given the price point and detail, this isn't aimed at kids. They will probably damage it and possibly injure themselves.

Unlike the other reviewer, I found the ship can easily rest on its own landing gear if you set it down gently. I didn't find the size to be too bad, it isn't large but it isn't tiny either. Basically, its footprint is the size of a standard notepad.

While this Gunship does differ in a number of ways from the ship in the comic/film that people enjoyed, it differs in a good way. After seeing model in person and checking out all its differences, the original version seen in the comic/film doesn't look quite as nice --and I call that a success.

If you're a fan of Nausicaa and like the idea of having a "Gunship Mark II" that's ready for immediate display, then this is a good pick-up.
続きを読む
8人のお客様がこれが役に立ったと考えています
違反を報告
レビュー を日本語に翻訳する

Nicolas
5つ星のうち5.0 Ideal transaction !
2015年12月4日にアメリカ合衆国でレビュー済み
Amazonで購入
Extremely fast shipping from Japan, really good price, the ideal transaction !
And the gunship is amazing, my only critic is that the fancy support is not extremely stable but the design and the attention in the details are stunning.
続きを読む
違反を報告
レビュー を日本語に翻訳する
すべてのレビューを参照します
Amazonプライム会員ならお急ぎ便、日時指定便が使い放題
さらに、映画もTV番組も見放題。200万曲が聴き放題 。クラウドに好きなだけ写真も保存可能。
> プライムを無料で試す