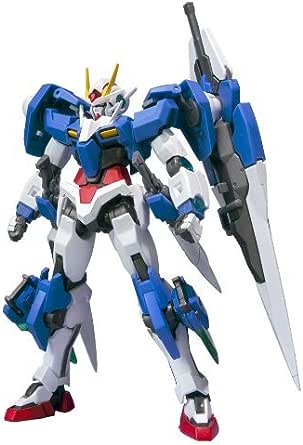 Adam Trang
5つ星のうち4.0 The Accessories are Amazing!
2015年5月27日にアメリカ合衆国でレビュー済み
Amazonで購入
The Seven Sword variant of the 00 Gundam is a must have for all Robot Spirits fans, and I've never even watched the series! This figure knocks it out of the park in terms of accessories, material quality, and detail. The only drawback to an otherwise flawless figure is a tendency for the smaller pieces to come apart during handling.

If you're looking to pose your figures, this Gundam is fantastic. It has extra wrist joints to enable more exaggerated action poses and the overall design of the frame allows for a wide range of motion. If i'm not mistaken, canonically the 00 Gundam has the ability to defy gravity to some extent, allowing the realistically heavy Gundam to move and attack with flips, etc. The figure is made to allow you to pose it as such; much different than the Unicorn Gundam or even the Wing Gundam.

The material is much denser than the other figures I own. There is much less of a hollow feeling to the plastic of the 00, where as my Sinanju, Wing, and Unicorn Gundams all feel hollow inside. This is overall much better than the other figures in material quality, but that's likely because there are fewer details on the body of the unit. There are no thrusters or anything to mount, so that was likely the reason it was possible to use heavier plastic.

There are a few details on the frame that tend to break off: The left GN Drive (carrying the weight of the buster sword), the head crest, and the side skirts w/ swords attached. Each piece doesn't simply "slip" off, but while posing they may create enough pressure to pop off. You'll have to get used to the correct range of motion to avoid popping the joints, but they are removable joints for a reason!

The main reason this figure gets 4 Stars rather than a full set is because of the Long and Short Sword. Each sword has a handle that fits into the hand and forearm of the Gundam. Having the handle slot into the forearm means you lose all range of motion in the wrist. If it was a sturdy connection, I wouldn't be so harsh, but it barely holds on. Once you plug in the forearm connector you will have to be extra careful.

As far as playing with this Gundam, a generic word of advice: Definitely not for all children (I would extend that to the entire Robot Spirits lineup). While the materials are great the figure is also made to look accurate with hard plastic edges and very small details. It is not meant for rough play. Now, if your child has a good habit of taking care of their valuables this is the ultimate reward -- this is a toy they will appreciate on a whole different level! Not only will they get to play with it, but they will also get to display it without feeling childish. It's a really fun toy.

With the Seven Sword Gundam you get a plethora of accessories that other figures can attempt to use. Robot Spirits figures tend to have different grips for their weapons, but for the most part the swords are thin grips that other figures should have no problems holding onto. Swords that turn into beam rifles? Awesome.
続きを読む
役に立った
フィードバックを送信中...
フィードバックをお寄せいただきありがとうございます。
申し訳ありませんが、お客様の投票の記録に失敗しました。もう一度試してください。
違反を報告
レビュー を日本語に翻訳する

Mech pilot
5つ星のうち5.0 Smaller, but tough.
2010年6月25日にアメリカ合衆国でレビュー済み
Amazonで購入
00 gundam Seven swords is a great figure, durable and lightweight. Articulation is great, but depending on your figure the ball/socket may be weaker, as my right arm falls off much more than the left(has not fallen off yet). The GN drives on the shoulders tend to limit some movement, but only to a realistic limitation as a human arm. The Head piece tends to fall off with without trying and it comes with two, same design only difference is material of the red piece, one is the same as the the rest of the figure and the other is the same as plastic rubies. my recommendation, pick the one you like and glue it on. All of the joints are very firm.

Weapons have nice variety, Two beam sabers that could be separated to be attached to the skirt armor, Two Katars (think halo energy sword) that attach to the new knee armor (old knee armor comes as spares), Two GN swords II that have four interchangeable white blades, long and short (tip is removable and attach to a wire piece, remember Code Geass Knightmare Frame's Anchor?) as well as the default ones use in the show (you should glue the green sights on, the blue armor bits will fall off and you can't do anything about it), and the big boy, the GN buster sword which doubles as a shield (only complaint here is the short length of the handle making two-hand very awkward), 00 seem to hold it up pretty well in one hand, can't say the same to it's wrists (well my right one).

Greatest flaw in this figure is the fact that the grips for some weapons are way to skinny for the hands, the buster sword is great (minus the weight), the beam sabers are good too. GN swords are held easily in sword mode, rifle mode on the other hand are dependent on the notches on the forearm, limiting a lot of good poses and the grip hand doesn't easily allow the gun to fit into the notch(easy fix, enlarge the grip with some thing removable, I removed the peg for the notch). The GN Katars have no way to hold them firmly and can be a pain to get on (fixed with the same method, recommend the grocery twisty ties, they are easy to put on and to take off)

Overall in order for this to be perfect you have to work on it a bit, but at least not as muck work as the model kits and it hell of a lot tougher, smaller than the 1/144 (about a thumb segment shorter than my GN X III) but if you want a 00 Gundam that you can play with (if you want to display, get the 1/144 model or any 1/100 00 model with resin conversion) then get this one.
続きを読む
5人のお客様がこれが役に立ったと考えています
役に立った
フィードバックを送信中...
フィードバックをお寄せいただきありがとうございます。
申し訳ありませんが、お客様の投票の記録に失敗しました。もう一度試してください。
違反を報告
レビュー を日本語に翻訳する

Guan K. Pickett II
5つ星のうち5.0 Gundam Goodness
2015年5月7日にアメリカ合衆国でレビュー済み
Amazonで購入
This figure is awesome. Only my second Robot Damashii figure. The accessories are in abundance since this is a 7 swords Gundam figure. There are alot of options and playability when reconfiguring this figures weapons to its various combinations. The joints are tight for now but when mounting the Buster Sword on the shoulder GN drive, it may become loose over time. The only complaint i have is that the soft head piece falls off too easily but it comes with two just in case you lose one.
続きを読む
役に立った
フィードバックを送信中...
フィードバックをお寄せいただきありがとうございます。
申し訳ありませんが、お客様の投票の記録に失敗しました。もう一度試してください。
違反を報告
レビュー を日本語に翻訳する

Raymond
5つ星のうち4.0 It's really nice but it's not too durable
2011年3月4日にアメリカ合衆国でレビュー済み
Amazonで購入
I recently bought Quanta and 00Seven Sword together, I was expecting more bang for my buck with 00 Seven Sword but that wasn't exactly the case. He's still a awesome toy with many weapons and poses too and is a tweaked version of the original 00 raiser which you can clearly see especially with the head and the coloring. It has very good articulation like all damashiis but the right arm seems to pop pretty easily and it's shoulder pad too. The V fin on top is pretty loose so if you're certain it won't ever break, I recommend you super glue it slightly to make sure it sticks in place but try looking at the difference between the two v fins,you'll notice one's PVC which us soft and the others hard plastic with a ruby v fin. The buster sword isn't any weight problem because it can be held two handed because there's a switch handle on top of the blade. The GN swords problem is that that blue thing comes off pretty easily but they hold in place. The Katars unfortunately don't hold in place and it's pretty annoying to put it on so just leave it on the knees. Although with this being said, he's still a very good product that I'd recommend.
続きを読む
1人のお客様がこれが役に立ったと考えています
役に立った
フィードバックを送信中...
フィードバックをお寄せいただきありがとうございます。
申し訳ありませんが、お客様の投票の記録に失敗しました。もう一度試してください。
違反を報告
レビュー を日本語に翻訳する

Dah Cappy
5つ星のうち5.0 Dat new plastic smell though
2016年12月3日にアメリカ合衆国でレビュー済み
Amazonで購入
Arrived in perfect condition. It was plastic sealed around the box and the figure even had that new plastic smell to it. Only a couple things about it; the helmet crest and the 2 beam sword handles will come off easily if you handle it even remotely more than a slight nudge. But thats something that can be remedied easily. Love the figure for sure though.
続きを読む
役に立った
フィードバックを送信中...
フィードバックをお寄せいただきありがとうございます。
申し訳ありませんが、お客様の投票の記録に失敗しました。もう一度試してください。
違反を報告
レビュー を日本語に翻訳する
その他の国際レビューを読み込む

Josue Campo
5つ星のうち5.0 Great condition
2014年3月18日にアメリカ合衆国でレビュー済み
Amazonで購入
Awsome condition great poses potential overall very worth the price. Keep in mind when you buy this that its not a model key but action figure so the parts are a lot more fluid
続きを読む
1人のお客様がこれが役に立ったと考えています
役に立った
フィードバックを送信中...
フィードバックをお寄せいただきありがとうございます。
申し訳ありませんが、お客様の投票の記録に失敗しました。もう一度試してください。
違反を報告
レビュー を日本語に翻訳する