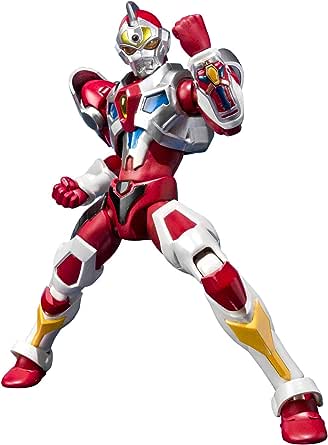 Samuel
5つ星のうち5.0 Nostalgia
2013年1月16日にアメリカ合衆国でレビュー済み
Amazonで購入
First of all, let me say this figure is quite surreal because I never thought Gridman(Japan) or Servo(US) would be made into another toy, ever. As soon as I found out that Ultra-Act was bringing this guy back, it was a no-brainer for me to purchase this figure.

The articulation in particular is very good, but not great. The two flaws I have about this figure his torso area, he has a hinge, but his torso and hips don't really rotate left and right. The second flaw is an important one. BE EXTREMELY CAREFUL WITH THE HANDS. When you swap out hands, I suggest you pull them straight out instead of rotating left and right to pull it off.

The accessories however, make up for the flaws for the most part. The grid beam is awesome, and so are his arsenal of weapons that are painted quite well.

Now nostalgia plays a large part in why I also bought this figure, and I'll tell you if you are a huge fan of Gridman(Japan)/Superhuman Samurai(US) or anything else you were into the 90's this figure is a must have.
続きを読む
1人のお客様がこれが役に立ったと考えています
役に立った
フィードバックを送信中...
フィードバックをお寄せいただきありがとうございます。
申し訳ありませんが、お客様の投票の記録に失敗しました。もう一度試してください。
違反を報告
レビュー を日本語に翻訳する

Lee Hill
5つ星のうち4.0 Amazing figure. but FRAGILE
2014年1月31日にアメリカ合衆国でレビュー済み
Amazonで購入
Figure is great all around, paint apps are flawless, articulation is the standard Tamashii nations import figure style. Sculpt is extremely pleasing. BUT BEWARE! When swapping all the interchangeable hands the ball peg on the wrist is likely to snap off, I only had it for one day and broke it, and I'm very gentle with my figures. The hole in some of the hands is just a tad bit too small for the ball peg and adds a lot of stress to it when changing them frequently. So just be gentle and patient with it, other than that SOLID FIGURE. I highly recommended it.
続きを読む
1人のお客様がこれが役に立ったと考えています
役に立った
フィードバックを送信中...
フィードバックをお寄せいただきありがとうございます。
申し訳ありませんが、お客様の投票の記録に失敗しました。もう一度試してください。
違反を報告
レビュー を日本語に翻訳する
その他の国際レビューを読み込む

J5
5つ星のうち5.0 Let's Samurize Guys!
2014年5月3日にアメリカ合衆国でレビュー済み
Amazonで購入
This is a great figure for casual or diehard fans of Superhuman Samurai Syber Squad and Gridman. The figure is nicely painted with great articulation and tons of accessories and hands. Make sure you pick up more than one if you plan on getting the armor sets!
続きを読む
1人のお客様がこれが役に立ったと考えています
役に立った
フィードバックを送信中...
フィードバックをお寄せいただきありがとうございます。
申し訳ありませんが、お客様の投票の記録に失敗しました。もう一度試してください。
違反を報告
レビュー を日本語に翻訳する

STRYDENT the 1st
5つ星のうち4.0 Not quite at full power
2014年5月15日にアメリカ合衆国でレビュー済み
Amazonで購入
I grew up a huge fan of Tokusatsu/Kaiju with Ultraman being a great focal point.
In the 90s I stumbled onto Gridman and the American counter part Superhuman Samurai Syber Squad(Jeez!) and I immediately dug the character of Gridman/servo. I mean...he's a Space Cop stuck in CyberSpace with an Ultraman schtick...too much awesome to ignore.
I even collected the old figures from Playmates. I especially liked the larger transformable vehicles. They could combine to become the 2 prominent mechas Xenon and Drago and also had the ability to Armor up Servo/Gridman to form Synchro and Formo modes.
This was really different from how things were done in Toku back then.
Now fast forward almost 20 years.
Bandai creates a line focused exclusively on the Ultra family of characters and Gridman/.Servo shows up in it.
I'm there!
Father's day last year was a much needed break in a very stressful time for me and I decided to splurge and get this guy.
4 days later, I have him in hand!
And upon opening the package...carefully...His left hand falls off.
It was broken before I even got him half out the package.
So...I gently put him back in the package and hit up Amazon to return/exchange for a new one.
1 day later. I have him in hand.
I open the package waaaaaaay more carefully than before.
This time, I go to switch hands to fit a pose I put him in for pictures taken for my review video on youtube( check that out here [...])
As I do that...the peg breaks.
I can't remember if I sent it back again or not. I think I did and the opposite peg broke so I just super glued the hands I liked the best in place.
The point being, I was let down horribly by my first Ultra Act figure.
And it was doubly bad because this was a piece of nostalgia for me that I was really looking forward to.

Now here's my review of the figure as it is.
Servo/Gridman is faithfully captured in the S.H. Figuarts like form.
He stands at 6", which is a head and shoulders shorter than other Ultra Act figures.

Sculpt.
Awesome sculpt. No detail has been left out at all.

Paint.
Very crisp and precise pant apps. Metallics used where Servo/Gridman had metallic coloring. Gloss finish used where gloss finish was needed and so on and so forth.
Very well done...as one would expect from the people behind S.H. Figuarts.

Articulation.
Really good, BUT, lacking in a few areas.
No waist swivel. And even though the torso is a 3 part joint like the neck with Upper torso, mid then lower torso, you can't twist anything. Really weird.
And of course...there's the hands.
He comes with several interchangeable hands BUT, the pegs they sit on are the most brittle of brittle plastics.
They are even smaller and more fragile than the sentai S.H. Figuarts.
They need to change this ASAP!
For the price we're paying there's no excuse for something sooooo fragile in an area meant for a lot of attention, with all the swapping going on.
Total Fail on their part.
And for those thinking I'm "tooo rough on my figures" this is the 11th in my Figuarts style collection and the 30th in my import superhero collection. He's the only broken one.

Overall
He's a fun,kinda obscure character that Toku fans love and have been waiting for.
As a Tamashii Nations Exclusive, he's a good pick up for the price. Those things get ignorantly expensive(Look up the S.H. Figuarts Faiz and Auto Vajin set and the Blue and Yellow Busters.).
If you dig the character, he's a must get. If you like the design, he's a must get.
BUT, be prepared to glue those hands. If he takes a fall off yer shelf or if you apply just a tiny bit more pressure than those brittle wrist pegs can take.
I hope the Thunder Gridman/Samurai Synchro and Dragon Emperor Gridman/ Formo are of better quality.
続きを読む
役に立った
フィードバックを送信中...
フィードバックをお寄せいただきありがとうございます。
申し訳ありませんが、お客様の投票の記録に失敗しました。もう一度試してください。
違反を報告
レビュー を日本語に翻訳する

Muscle Dude
5つ星のうち5.0 you know how else like Gridman/Servo...MY MOM
2013年5月16日にアメリカ合衆国でレビュー済み
Amazonで購入
i don't know what to say is..."Let's Samuraize, Guys!!!!!" WHOOOOOOOOOOOOOOOOO this figure is on fire. the details are amazing along with is weapons awesome

Ernesto Robles
5つ星のうち3.0 gridman or servo may need some updates
2014年6月1日にアメリカ合衆国でレビュー済み
Amazonで購入
This figure is great. Paint is excellent and adding some gloss to parts his armer is very thought out. Come with tons of accessories. From his hand poses, to his weapons, to his beam arm that fire off his left hand. Now some problems, one of the shoulder pad was loose and believed its only this figure, second the joints can freeze and get stuck, use hot water if nessecary, last the ball joints is a bit tough to removed or add and can cause the ball joint to snap. Hope they can re-release the figure and fix minor problems.
続きを読む
役に立った
フィードバックを送信中...
フィードバックをお寄せいただきありがとうございます。
申し訳ありませんが、お客様の投票の記録に失敗しました。もう一度試してください。
違反を報告
レビュー を日本語に翻訳する

Michael Held
5つ星のうち4.0 Gridman... isn't quite ready for action.
2013年10月1日にアメリカ合衆国でレビュー済み
Amazonで購入
This was the first Ultra-Act figure I have ever purchased, and I'm for the most part satisfied. He comes with quite a few different hands, different weapons like his sword, shield, mega-sword, and his special beam, the Gridbeam. The articulation is on scale with what you'd expect from a SH-Figuarts or something equivalent. The glaring problem with the figure though, is switching his hands. From what I've read online, it's quite a common problem, and I've experienced it too. The pegs that Gridman's hands... peg to have a tendency to break rather easily, rendering hand-changing impossible. Though this can be avoided with superhuman levels of caution, it's still a concern. All-in-all, it's a great figure, but don't expect to swap hands or weapons a lot.
続きを読む
役に立った
フィードバックを送信中...
フィードバックをお寄せいただきありがとうございます。
申し訳ありませんが、お客様の投票の記録に失敗しました。もう一度試してください。
違反を報告
レビュー を日本語に翻訳する

Patrick
5つ星のうち3.0 Excellent detail but feels flimsy
2013年1月9日にアメリカ合衆国でレビュー済み
Amazonで購入
On the basis of detail alone, I would give this figure 5 stars.

The only thing that hurts it is it's loose joints in the legs. You can get the figure into a lot of different poses, but keeping him their is very difficult. It would have been much better if they had included some sort of stand for better poseability.

It's possible that maybe I got a bad one, I also purchased 2 other ones so I will see how those stack up.
続きを読む
役に立った
フィードバックを送信中...
フィードバックをお寄せいただきありがとうございます。
申し訳ありませんが、お客様の投票の記録に失敗しました。もう一度試してください。
違反を報告
レビュー を日本語に翻訳する