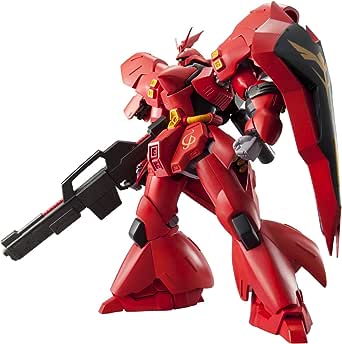 mattisawesome4
5つ星のうち4.0 Leaves a lot to be desired
2014年10月1日にアメリカ合衆国でレビュー済み
Amazonで購入
This guy is massive! Out of the box, it looks great! If you're looking on buying him to pose on your shelf, then he is a great buy! Specially if you get him for a really good price like I lucked out with.
Now if you're looking for an action figure with great articulation and great poseability with a lot of accessories, then you should look into getting the EMSIA Sazabi. This robot damashii has really good articulation from the torso up, but as far as the legs, they just really feel like giant blocks that get in the way, you can get a good bend at the knee, and feet, but as far as the hips, they feel like the hip joints are going to brake every time you mess with them.
Also as far as accessories, you get a decent amount, but for the prices most places are asking for, they're not worth it for the most part. The lack of open funnels (funnels in action), the open head and gundam hand with Sazabi cockpit, which you can only get through the Number Gundam expansion pack, leaves much to be desired.
Also another thing, the lack of detail on the figure and rifle. I mean I know there really isn't much detail on the Sazabi in the movie, but Tamashii nations could have opened up their imaginations to add some detail, specially to the rifle since its pretty much just one solid color.
Overall I got this figure because I have the RD Nu gundam, and it's the obvious you gotta have both of them in your collection! But had I not gotten such a good deal on the Sazabi, I would have been more disappointed. To me this figure feels like Tamashii nations could have done a much better job.
続きを読む
4人のお客様がこれが役に立ったと考えています
違反を報告
レビュー を日本語に翻訳する

SNSDgundamfan19
5つ星のうち5.0 so i finally have the two rivals from "Char's Counterattack" and I'm satisfied
2012年11月9日にアメリカ合衆国でレビュー済み
Amazonで購入
Let me start off by saying that this figure is HUGE, I mean bigger than the EMSIA version, the Robot Spirits Nu Gundam (w/o the funnels) and the Robot Spirits Sinanju. Very good articulation for a really bulky mobile suit, the figure and accessories are very detailed and it has the similar look to the anime which I really like. The only cons for this figure is that it doesn't come with the deployed funnels (like the EMSIA and others) and it lacks some details it's predecessor, the EMSIA had. The shield is a bit small but it can be forgiven. Overall, besides the fact that it lacked some detail and accessories, this is still a must have figure for those who are fans of Char Aznable the "Red Comet."
続きを読む
2人のお客様がこれが役に立ったと考えています
違反を報告
レビュー を日本語に翻訳する

J. Nelson
5つ星のうち3.0 A bit of a disappointment
2013年7月6日にアメリカ合衆国でレビュー済み
Amazonで購入
The Tamashii Nations figures can be really hit, or miss at times, and unfortunately, Char's Sazabi is a bit of a miss. For being one of the signature Mobile Suits from the Universal Century timeline, Tamashii didn't really do this figure justice. The figure is not as articulate as most of the other figures in this particular line, which can make posing it difficult at times. I guess my real complaint here is that there really doesn't feel like there is much substance to this figure, it just feels cheap. Don't get me wrong, this is a must have for any Char fan, I was just hoping for a little bit better of an effort.
続きを読む
違反を報告
レビュー を日本語に翻訳する

Rico
5つ星のうち5.0 Perfect for a fan of Gundam and the movie - Char's Counterattack
2014年2月5日にアメリカ合衆国でレビュー済み
Amazonで購入
I love this Mobile Suit action figure! Very accurate to what you see in the movie and very detailed. It can be posed in many different ways, at least what I'm use to with Gundam action figures in the past. Also any of the weapons that come with the Sazabi ( Beam Shotgun and or beam sabers), all stay in place when you put them in the hands.
続きを読む
違反を報告
レビュー を日本語に翻訳する