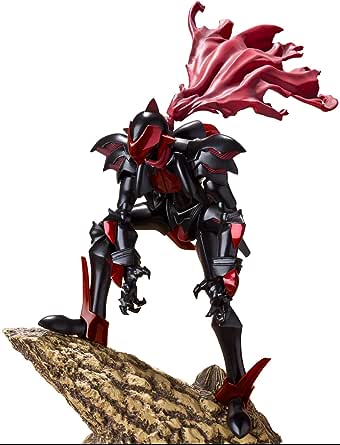 Robin Baker
5つ星のうち4.0 Would recommend, but educate yourself first
2015年6月22日にアメリカ合衆国でレビュー済み
Amazonで購入
The tightness of the hip ball joints is no joke - when I took mine out of the box they refused to move at all and it took a lot of careful fiddling to get them to go at all. However, the shock oil hack mentioned by someone commenting in the reviews works like a charm, loosening the hip ball joints up just enough that they move freely without being loose. I also find that attaching the cape is rather annoyingly hard to do since it's a REALLY tight fit.

The only other issues I have with this figure is that it is missing some purple paint apps present even on the final game model, so it's not entirely game accurate in terms of paint, and the rock stand is ridiculously hard to get him pegged onto. But overall, I would definitely recommend this figure if it drops back to or below $30, which is what I paid for mine. Just know you *will* need to lubricate the hip joints or you will risk breaking it.
続きを読む
1人のお客様がこれが役に立ったと考えています
役に立った
フィードバックを送信中...
フィードバックをお寄せいただきありがとうございます。
申し訳ありませんが、お客様の投票の記録に失敗しました。もう一度試してください。
違反を報告
レビュー を日本語に翻訳する

Andrew
5つ星のうち3.0 Use to buying PVC figures. This is plastic.
2014年4月17日にアメリカ合衆国でレビュー済み
Amazonで購入
It's a cool figure, but the cape is hard to get on and it off balances the character a ton. Not that wasn't obvious. However, this is made as cheap as figures bought at any retail store and I'm almost afraid to even use it, thinking it might break. It's not worth the cost. Maybe 20 bucks. I'm also a huge fan of Wild Arms 2 so I was kind of let down. Pretty cool overall, just not worth the price.
続きを読む
1人のお客様がこれが役に立ったと考えています
役に立った
フィードバックを送信中...
フィードバックをお寄せいただきありがとうございます。
申し訳ありませんが、お客様の投票の記録に失敗しました。もう一度試してください。
違反を報告
レビュー を日本語に翻訳する

david
5つ星のうち1.0 worst d-art i own
2015年8月20日にアメリカ合衆国でレビュー済み
Amazonで購入
i own alot of d-art/figuarts and this is the lowist on the list brakeing right out the gate becuse his hip joint snaped becuse it was to long and to tight the hands are to big for the bem sword thing im not mad becuse i know this is one of the 1st d-arts to be relessed and im more glad all my later d-arts are a huge set up also i baght this for around 20$ but man pass this one up looks awesome but is a huge let down but dont let this turn you off from tamshii figures becuse this is a rare cass
続きを読む

Tony 'Cute As A Button' Hutton
5つ星のうち2.0 Nearly perfect, but for one glaring flaw
2013年3月9日にアメリカ合衆国でレビュー済み
Amazonで購入
The Knight Blazer action figure from D-Arts is a nearly-perfect rendition of the "character"'s depiction in Wild Arms: 2nd Ignition. The swappable chest, numerable hands, interestingly-unique rocky outcrop stand, and beam sword accessory help create a variable and exceptional figure. His arms have all the articulation you'd hope for in a Bandai product, though his hands seem somewhat restrictive because of the cuffs around his wrists. In a similar vein to the cuffs, his ankle adornments can be a hassle as they jiggle around during posing. However, by and large, the biggest problem I, personally, encountered -- and after a bit of research, apparently others have encountered -- is the devastatingly flimsy hips.The design has the ball-joint of the hip placed in the leg itself, with a thin bridge connecting the ball to the crotch at a hinge. The problem with this design arises in two places -- the thin bridge, and the ball. The ball in the joint is too tight for the joint itself, and without some heat-treating and joint-shaving, any attempts to move the ball can easily result in an accidental snapping of the plastic bridge, rending the leg displaced from the rest of the body. I, personally, encountered this awful conclusion, and as such cannot praise the figure nearly so much as I would like, but if one were to take extra caution in treating the hips with what should be unnecessary care, then this flaw can be overlooked and the figure easily earns a 5/5 star rating.
続きを読む
7人のお客様がこれが役に立ったと考えています
役に立った
フィードバックを送信中...
フィードバックをお寄せいただきありがとうございます。
申し訳ありませんが、お客様の投票の記録に失敗しました。もう一度試してください。
違反を報告
レビュー を日本語に翻訳する