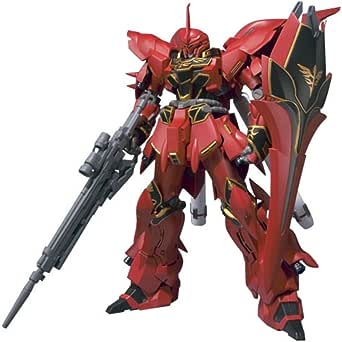 JK1989
5つ星のうち5.0 Worth Every Penny!
2011年10月28日にアメリカ合衆国でレビュー済み
Amazonで購入
I've seen the as much of gundam unicorn as is currently available. Sinanju intrigued me because its such an awesome design.
Pros:
There has to be like 20 ways to configure this figure. changeable arm panels, shield and rifle attachments, detachable backpack. The craftsmanship is outstanding, as well as the level of detail. I normally display my gundam models and figures but Sinanju is SOOOO NICE i decided to put him back in his box. Just because of this figure im looking at buying one of the larger Sinanju model kits.

Cons: as mentioned in the review i read before i purchased this figure, the plastic used is quite brittle. If you own or have owned gundam action figures from the 90's and early 2000's and know how soft and flexible the plastic was, this isnt even close. it is also somewhat stiff in the joints but i guess thats also a good thing when trying to pose him. only real problem ive found with this figure is the elbow joints on the arms only bend to about 90 degrees. also with shipping from the seller (100 miles from me) It cost $75!!! thats like $14 shipping/handling and it came in a flat rate box.. im assuming that included package insurance...

If i could buy it again... OF COURSE I WOULD! Sinanju is awesome, and if you are an Otaku this is a must for any mecha collection!
続きを読む
1人のお客様がこれが役に立ったと考えています
役に立った
フィードバックを送信中...
フィードバックをお寄せいただきありがとうございます。
申し訳ありませんが、お客様の投票の記録に失敗しました。もう一度試してください。
違反を報告
レビュー を日本語に翻訳する

665
5つ星のうち4.0 Overall Great, but cannot stand on it's own...
2013年3月18日にアメリカ合衆国でレビュー済み
Amazonで購入
Biggest negative: This figure has so much weight on the back it will always fall backwards. You should purchase or own a tamashii stage act 5 so this figure can stand. It definitely should have come with a stand.

That being said, the figure is very cool. I was skeptical as to how great it would look in person versus the pictures, but it is incredibly well painted, better than most robot spirits. It also comes with a very large amount of accessories, nothing is left out, you get everything you see the Sinanju use in the anime. So far it is quite durable too. The white tanks on the back do sometimes come off and that might eventually be a problem, especially if you lean it against something rather than use a tamashii stage. I wouldn't say this is my favorite Robot Spirits, but it may be my favorite Zeon one.
Well Done Tamashii!
続きを読む
役に立った
フィードバックを送信中...
フィードバックをお寄せいただきありがとうございます。
申し訳ありませんが、お客様の投票の記録に失敗しました。もう一度試してください。
違反を報告
レビュー を日本語に翻訳する

Lininality
5つ星のうち5.0 Epic!
2011年5月12日にアメリカ合衆国でレビュー済み
Amazonで購入
If you are reading this then you are either a Gundam fan or have clicked on the wrong product. This figure holds some amazing detail, some that the bandai figures never had. You can definitely tell that the people who designed this figure took very good care in making every last detail count. The articulation is off the charts!!! every single joint and piece of armor pivots just how you want it to. If you ever wanted to own a high quality Gundam figure that will not break then this is the one for you.

The only downside that I have noticed about the figure is that when you put the thrusters on its back it becomes very back heavy and tends to fall over a lot. This is in part from its small feet, that it has from what I can tell. Also I feel it should be noted that this guy is HUGE! he is currently standing next to my Robot Damashii Seven sword Gundam and dwarfs the damn thing in just about everything.
続きを読む
役に立った
フィードバックを送信中...
フィードバックをお寄せいただきありがとうございます。
申し訳ありませんが、お客様の投票の記録に失敗しました。もう一度試してください。
違反を報告
レビュー を日本語に翻訳する
その他の国際レビューを読み込む

Daniel B.
5つ星のうち5.0 The best action figure i've ever bought
2012年2月3日にアメリカ合衆国でレビュー済み
Amazonで購入
This figure is incredible! It is one of the most well-designed Gundam figures I've ever bought (I own about 45 Gundam-related figures). The figure is constructed with a durable, rigid, and lightweight plastic (no rubber or soft plastic parts). The light weight allows the figure to be posed in any conceivable position you could want without the frustration of joints sagging under their own weight. The elbow joints have a kind of notch-locking system, and you can hear it click into place at certain intervals. It's tight enough to support the rifle and and shield without sagging, but it doesn't take any effort to rotate the joint. You get a full range of motion, and it can hold it's rifle and/or shield without sagging. The shoulders rotate forward/back, up/down, in/out and hold position. The knees are double-jointed allowing different kinds of kneeling poses. The neck and head are double-jointed allowing rotation, looking up/down, and moving forward/back for even more freedom in posing. The waist-joints allow the figures torso to rotate and bend forward. The thruster and fuel tanks on the back are rigid and lightweight, and don't offset the figures center of gravity by too much, and I haven't had any problems getting it to stand on its own. A great addition to any collection!
続きを読む
役に立った
フィードバックを送信中...
フィードバックをお寄せいただきありがとうございます。
申し訳ありませんが、お客様の投票の記録に失敗しました。もう一度試してください。
違反を報告
レビュー を日本語に翻訳する

Douglas R Benson
5つ星のうち4.0 Great looking Sinanju, highly recommend
2019年9月18日にアメリカ合衆国でレビュー済み
Amazonで購入
Love this product, got it for a pretty decent price too. I highly recommend getting a Tamashii Stage (I got a two pack of the Stage 5, I think) to support the heavy upper body. But the figure itself looks great and is a nice alternative to those who want to get the Sinanju but don't want to deal with the gold decals/painting all of the trim parts.
続きを読む
役に立った
フィードバックを送信中...
フィードバックをお寄せいただきありがとうございます。
申し訳ありませんが、お客様の投票の記録に失敗しました。もう一度試してください。
違反を報告
レビュー を日本語に翻訳する

SNSDgundamfan19
5つ星のうち5.0 HAIL NEO ZEON!!!!!!!
2011年6月27日にアメリカ合衆国でレビュー済み
Amazonで購入
This figure is off the chain!!!!!!!
-Many good points of articulation such as the arms, legs, torso, sideskirts, and backpack
-the shield looks awesome with the swords
-awesome darth maul status when swords are connected
-this guy is very pointy on the knees, legs and shoulders which makes the texture of the mobile suit epically realistic
-THIS GUY IS FRIGGIN HUGE!!!!!!!!

Jeff Godemann
5つ星のうち5.0 Red Comet's Second Coming
2011年7月8日にアメリカ合衆国でレビュー済み
Amazonで購入
It's been several years since I've purchased a Gundam. I have a quite a collection I built up while stationed in Japan. Unfortunately the Gundam franchise isn't nearly as popular here in the USA, so options are limited. Add to that the increased price from importing and what was a weekly habit in Japan is reduced to "one every few years."

The Robot Spirit MSN-06S Sinanju got me back into the Gundam market. I've been playing "Dyansty Warriors Gundam 3" on the PS3 and have "Gundam Unicorn" on Blu-ray. The look of this mobile suit really caught my attention. It evokes the look and feel of Char Aznable's MSN-04 Sazabi, although with a sleeker, deadlier look. Very appropriate for the "Red Comet's Second Coming." The design has all the hallmarks of those classic Gundam designs from the Universal Century era: sleek lines, flowing curves, vernier thrusters all over the place, detailed decorations, and cool weapons.

As for this toy representation, I am very impressed. This is the first "Robot Spirit" I have purchased. The descriptions and images implied a more highly evolved "Mobile Suit in Action," (MSiA) although not quite to the quality of the "Gundam Fix Figuration," (GFF) of which I have several. It is highly detailed with an insane number of articulation points. There are lots of accessories available that allow you to pose the Sinanju with a wide array of weapons. Joints are tight, so my current display pose of aiming the beam rifle with shield in guard position won't falter. The backpack thrusters and fuel tanks do overbalance it a bit, but with the weapons extended to the front, it balances out nicely.

My only real concern is the plastic used. Like I said, I've been out of the Gundam market for a few years, so perhaps this is the norm now. The plastic seems brittle. On the one hand this is good: many MSiAs were made of softer plastic, which tends to warp or droop. No worry of that with the Sinanju. On the other hand, I can't help but think that the beam sabers would snap quite easily. This is not a significant concern for me, as this is a display model, not a child's toy. If you intend to give this to a child, though, take note. The interchangeable hands and attachment points are made of a softer plastic, so no worries about fingers or attachment points snapping off.

Fun: If you enjoy getting your Gundam into all sorts of different, dynamic poses, this one will keep you busy.
Educational Value: Unless you're tracing design lineage of Zeon mobile suits from the One Year War onward, not so much.
Durable: Again, the brittleness of the plastic is my only issue.
Overall: Excellent design, marking/paint application, articulation and accessories. A fine addition to any Gundam otaku's collection!
続きを読む
6人のお客様がこれが役に立ったと考えています
役に立った
フィードバックを送信中...
フィードバックをお寄せいただきありがとうございます。
申し訳ありませんが、お客様の投票の記録に失敗しました。もう一度試してください。
違反を報告
レビュー を日本語に翻訳する