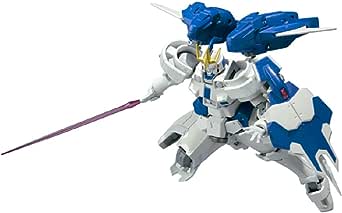 The successor to the Trieze's Tallgeese II, this Mobile Suit appeared in Gundam Wing: Endless Waltz piloted by Zechs Merquise. The knight-like ornamental nature of this suit fits Zechs's personification of Preventer Wind and his Mega Cannon is enough to match the Wing Zero's Buster Rifle. It's a really awesome suit and now we have it in the Robot Damashii line as well. Last we saw it in toy form, it was part of the original MSiA line-up for the Endless Waltz movie with 2 variants; one with yellow paint and one with gold paint. It suffered from a problem all the Tallgeese toys did and that was, if the gun and shield connectors fell out of the shoulders, they were pretty much impossible to put back on. Luckily, this Robot Damashii figure sets out to correct that and some other mistakes the original figure had. So, let's see just how good it is.

The head of this neat MS looks really nice with an intricately painted visor and a gold head ornament. The Vulcan Pods are not necessarily circles like in the show, but rectangles here which is an odd sculpting design. The head, although may make some angry, actually has a proper articulation this time around. The "chin" is sculpted as part of the head and limits the movement of the head severely. However, upon reviewing the movie, this is actually how the head moves and, so, they got it right.

Sporting the RD-standard two ball-joint system, there are two separately articulated point on the torso allowing for a good range of movement. The ability to bend forward, backward, and side-to-side are present. The sculpt is accurate with the big goofy handle jutting out of the chest and the pods located on either side of the head all there. The pelvic thruster is sculpted in and the front and side skirt armor pieces are movable to allow the legs some good movement as well.

The legs of the Tallgeese have double-jointed knees and the kneecaps are in the middle of the joint which looks pretty nice. The feet have multiple articulation points allowing them to bend downward and the side thrusters on the thighs this time around are fixed to the leg and unmovable. This is good because the old MSiA version's leg thrusters would move all around when trying to pose him. The paint, although, mostly white, is done well with a grey trim and some very minute panel-lining around the feet and leg thrusters.

The arms here have double-jointed elbows and double ball-jointed wrists as well as some nice shoulder articulation. The gun and shield connectors are hanging off the sides of the shoulder armor but are not removable and looks off with two grey ball joints hanging off the shoulders when the gun and shield are not in use. The blue thrusters on the back must be attached out of the package and sit on a swiveling ball joint to allow a good range of movement. You can pop out the sides of them to reveal the thrusters as well but you want to be very careful because they can be stiff and you don't want to pop off a side section and break it. Also, I noticed the hands can be difficult to pop onto the wrists due to the double ball-joints. Aside from all that, they are painted nice and look great.

Hands - This white knight comes with two fists, two open hands, two posing hands, and a single right hand for the Beam Saber. The fists and posing hands serve no purpose other than looking nice in certain poses and the open hands hold the Shield and Cannon well and also hang on to the Beam Sabers tight too! The single right hand for the Beam Saber is molded so that his thumb is behind the Saber and the sword is pointed down at an angle. It can make for some really neat poses! The hands all work well but can sometimes not want to sit on the ball joints very snug and result in the hands popping off every once in a while; especially when holding the Mega Cannon at an angle.

Beam Saber - The Tallgeese comes with two Beam Saber hilts and a single orange blade. The two hilts can be stored within the Shield and the blade can be attached to one of them. The problem here is, the blade color is actually supposed to be a standard pink color. On top of that, we only get one blade when it's supposed to have two. This is a bit of a disappointment.

Shield - The Tallgeese's signature Shield is included and it has a much better connection system than the MSiA version. It now sit on a swiveling ball joint and the Shield itself has another swiveling joint system that allows for a nearly limitless amount of articulation. It by turning the connector upward, it can sit higher up on the arm and be in a stored position or turn it down and swivel the handle out to have the Tallgeese hold it. There are two Beam Saber hilt racks inside the Shield and the Heat Rod is stored at the base of the Shield.

Heat Rod - This piece is what the Tallgeese uses in the movie to rope around a Serpent Custom's leg and pull him in. The one included is articulated at each segment with a ball joint but, unlike the MSiA version, can retain its pose due to its stiff joints. The front piece can be detached and attached onto the Shield to be stored. The only complaint I have here is that the one used in the movie turned orange as if in a heated mode and we do not get a heated version of it.

Mega Cannon - Here we have the Tallgeese's main weapon that was used a grand total of one time in the movie. However, when it was used, it was an epic, destructive force and we get to see that recreated here in toy form. It connects to the shoulder armor with a swiveling ball joint and another swiveling ball joint goes into the gun giving it maximum articulation range. The arm has to be at a bit of an angle for the hand to hang onto it but it's not a big deal. The barrel, is less interchangeable than before but is more complicated now. You must remove the entire front barrel and slide off the top and bottom pieces revealing the inner barrel. Then, attach the top and bottom pieces onto the open barrel and reattach it to the gun to be in firing position. This whole process would have been much easier with two completely separate barrels but I guess they wanted to save plastic this way. The paint on it is done well with copper tubing running through it and a blue back piece.

The Robot Damashii Tallgeese III gives this MS a new lease on life as a toy. It has a profound sculpt to it and the weapon connectors are no longer a pain. However, it is not without its faults. The unsightly shoulders, fragile thrusters, lack of a second Beam Saber, wrong Saber color, lack of an orange Heat Rod, and a few other flaws really put into perspective just how good this figure would have been if it had been done right.
続きを読む
8人のお客様がこれが役に立ったと考えています
違反を報告
レビュー を日本語に翻訳する

Mishii
5つ星のうち5.0 This is a job for TALLGEESE
2013年4月17日にアメリカ合衆国でレビュー済み
Amazonで購入
Personally I will be an bias opinion as I'm absolutely gaga over the Tallgeese and all MS influenced by such. Robot Spirits excels in creating a wonderful figure as always and that of course adds to my feelings about this one. The only think lacking from this was that I am not small enough to fit inside and pilot it as it is just a toy and I am a dreamer.
続きを読む
違反を報告
レビュー を日本語に翻訳する

5つ星のうち5.0 Perfect for any GW fan
2012年11月12日にアメリカ合衆国でレビュー済み
Amazonで購入
If you are a Gundam Wing fan and a fan of the tallgeese this is for you. I am not big on model kits, more of action figure collector so this was a perfect figure. My only wish was that it came with a stand but other than that this is a great figure, can't wait to get the other RS Gundam Wing line.
続きを読む
違反を報告
レビュー を日本語に翻訳する
すべてのレビューを参照します
Amazonプライム会員ならお急ぎ便、日時指定便が使い放題
さらに、映画もTV番組も見放題。200万曲が聴き放題 。クラウドに好きなだけ写真も保存可能。
> プライムを無料で試す