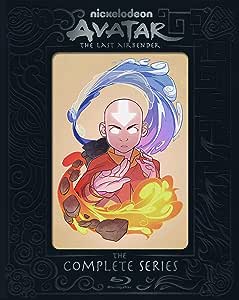 Anthony C.
5つ星のうち5.0 Avatar The Last Airbender, A fantastic Blu Ray Set
2018年6月6日 - (Amazon.com)
Amazonで購入
First of all what a MESS of reviews my god.... What was amazon thinking mixing the dvd reviews together with the blu ray reviews?

In case you haven't noticed this review is for the recently released avatar the last airbender blu ray set. What the hell took them so long? The legend of kora has been on blu ray for a while now.... All well we have it now so it doesn't matter. Lets get into the review!

We all know the story of the last airbender by now, I don't really have to repeat it. It's a fantastic journey were the boy Aang goes on to learn the rest of the 3 elements so that he can save the world from the fire nation. The slip cover looks amazing and the art cover for the blu ray case looks fantastic. Really well done compared to the legend of kora blu ray set, even though I wish it also had an artbook like the legend of kora blu ray set because I do indeed like the artwork of the avatar series.

Some technical features are that the picture is in a 4×3 size hence the black bars to the side. I guess it makes sense that they didn't want to stretch the picture due to the old animation originaly made to fit tv screens. I'm not complaing seeing as I own other old animes on blu rays with that aspect raito like yu yu hakasho.

The whole runtime is 1464 minutes which in simple terms is 24 hours and 14 minutes long. This doesn't touch the fact that on how long the special features are.... That's a lot of watch time... That's even more runtime than a 51 episode anime series. If you think your going to watch this in a day? That would be physically impossible... It's something that it can take you more than a week to watch if anything. Even a 25 episode animes that's quite a lot to watch in one sitting... So if your are wondering if this is your bang for your buck, yes it is...

Special Features Include: The Making of Avatar Featuretts, Original Uncut Animattic "Bato of the Water Tribe", Original Uncut Animattic", Behind the Scenes with the Avatar Cast & Crew, Avatar Super Deformed Shorts, Into the Fire Nation at San Diego Comic-Con, The Women of "Avatar: The Last Airbender" as well as even more Featuretts, Audio Commentaries and More. Thats a lot of special features right there, pretty sure most of them were on on the previous dvds just ported over to the blu ray set.

The picture looks better than ever even with the black bars on the side, the technicolor gives it better color, Audio is dts-HD Master Audio and Dolby Audio, it sounds great for only 2.0 audio, though should be 5.1 audio like the legend of kora... Still it looks great on blu ray, even though it's older textures still being there.

Conclusion? This is one of the best blu ray purchases I have made in a LONG time. The price alone is fantastic for so many episodes! If this wasn't a cartoon but an anime then the price would probably be nearly over 100 dollers! For only 29.99 plus tax? This is a steal! Go buy it right now.

First thing I should clear up because Amazon puts the DVD reviews in with the Blu-ray for some strange reason: The "double-line" issues of Book One's first disc has been FIXED! That alone made it worth it to me. There are times when the animation itself is wonky, but this show is 13 years old now and wasn't made with HD quality so .

Naturally, it still also has the full screen aspect ratio (black bars on the side), but that's to be expected. Just wanted to put that out there if that bothers anyone.

The box is nice and didn't arrive broken. I like the two different covers on the sleeve and on the case itself. I wish there was a bit more "artfullness" to the inside and the discs themselves, as they all look the same. I recommend everyone making sure they have all the right numbered discs when you buy it, just in case.

I bought it for $30 and it is worth it. That comes out to $10 a season. Considering a few years ago, people were trying to sell all the DVD Sets for $60-100+ on eBay, you might as well get the Blu-Ray
続きを読む

Stephen Kendall
5つ星のうち4.0 Great show, confusing chapters
2018年7月20日 - (Amazon.com)
Amazonで購入
First off, Avatar: The Last Airbender is an amazing show, and any fan should have the complete collection in their collection. This Blu-Ray collection is not remastered in HD. There may be some upscaling, but it looks about like what I’d expect from a DVD set.

I think the disc setup for this collection could have been handled better. Each disc has 8 episodes on it, for three discs per season. The problem is that this doesn’t always correlate to the chapters accessible from the disc menu. Starting with Season 2, two-or-more-part episodes show as a single chapter, yet it’s up to the viewer to remember which episodes have multiple parts. The last disc is particularly confusing if you’re not prepared for it; it only has 2 chapters on it, since Sozin’s Comet, the final set of episodes, has 4 parts. Watching the whole last chapter all the way through is a near-2-hour commitment. Even more confusing, the first combo episode is in Season 2, with Episode 12-13 (“The Serpent’s Pass” and “The Drill”) combined into one chapter. This is extra weird because while these are rather related to each other, they’re not branded as two parts to the same episode/

I kind of see why they bundled mutli-part episodes together, but I think it would have been better if they specified when they did this in the disk menu. For example, I would have been happier if the last disk had its chapters named “Nightmares and Daydreams” and “Sozin’s Comet (4 episodes).” Alternately, just listing the run-time of each chapter would convey roughly the same information and make it easier to plan what to watch.
続きを読む
110人のお客様がこれが役に立ったと考えています
レビュー を日本語に翻訳する

Amazon Customer
5つ星のうち5.0 The Quality is Fantastic
2018年6月6日 - (Amazon.com)
Amazonで購入
Whatever issues the first book on DVD had have been fixed for the Blu-ray release. I was worried about the quality after seeing the complaints about the dvd, but it’s not an issue!
続きを読む
85人のお客様がこれが役に立ったと考えています
レビュー を日本語に翻訳する
Amazon.comのカスタマーレビューを見る(2,186) 5つ星のうち4.4
Amazonプライム会員ならお急ぎ便、日時指定便が使い放題
さらに、映画もTV番組も見放題。200万曲が聴き放題 。クラウドに好きなだけ写真も保存可能。
> プライムを無料で試す