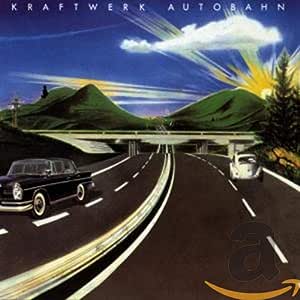 Though they'd recorded three previous albums, Kraftwerk's modern pop legacy starts with the sounds of a few footsteps and a slamming car door--the beginning of a 22-minute musically impressionistic excursion down Germany's famed superhighway. An unexpected hit on both sides of the Atlantic, Autobahn's "fahren, fahren, fahren" refrain echoes "Fun, Fun, Fun" by the Beach Boys (just one of Kraftwerk's unlikely influences), while the entire concept recalls Brian Wilson's frustrated attempts at creating what he called "a pocket symphony." The rhythmic synth pulse that carries the title track will be familiar to Kraftwerk admirers, while cofounder Florian Schneider's flute work and other more delicate melodic touches hearken back to the band's prog-rock foundations (as do the atmospheric "Kometenmelodie 1 & 2," "Mitternacht," and "Morgenspaziergang"). Kraftwerk's fascination with technology has been well documented, but the revelation of Autobahn is the playful human spirit behind the robots' masks. --Jerry McCulley

Refresh
5つ星のうち5.0 Masterpeace.
2017年12月7日に英国でレビュー済み
Amazonで購入
Always been a fan of Kraftwerk and use to have most of their albums back in the 70s, was a bit dubious buying a remastered CD, but what a suprise!! I own vintage marantz amp and vintage speakers, the repoduction sound was brilliant, ( no compresion on the CD) , pure sound. The fist track is a extended version of Autobahn, what masterpeace, Well thats my opinion anyway..Yes I can recomend this CD
続きを読む
10人のお客様がこれが役に立ったと考えています
役に立った
フィードバックを送信中...
フィードバックをお寄せいただきありがとうございます。
申し訳ありませんが、お客様の投票の記録に失敗しました。もう一度試してください。
違反を報告
レビュー を日本語に翻訳する

Mr. A. J. Tennant
5つ星のうち5.0 Kraftwerk: Autobahn
2014年4月20日に英国でレビュー済み
Amazonで購入
I bought Kraftwerk's album Autobahn as a present for my dad and he was really impressed with it (for those who don't know, "Autobahn" is the German for "Motorway"). This album from the German electronic music band, which was released in 1974, consists of just five tracks as "Autobahn", the title track of the album, is nearly 23 minutes long (the title track was heavily edited down to 3 minutes for a single release). The other four tracks on the album are considerably shorter than the title track, although "Kometenmelodie 1" ("Comet Melody 1") and "Kometenmelodie 2" ("Comet Melody 2") are the longer of the other four tracks at 6:26 and 5:48 respectively - "Mitternacht" ("Midnight") and "Morgenspaziergang" ("Morning Walk") are around the 4-minute mark.

Although I haven't listened to Autobahn yet as I bought the album as a present rather than for myself, I did hear that it was supposed to be very good so maybe I should get round to giving it a try sometime. Highly recommended.
続きを読む
3人のお客様がこれが役に立ったと考えています
役に立った
フィードバックを送信中...
フィードバックをお寄せいただきありがとうございます。
申し訳ありませんが、お客様の投票の記録に失敗しました。もう一度試してください。
違反を報告
レビュー を日本語に翻訳する

Jeffrey M. Black
5つ星のうち5.0 Futurism that hasn't dated
2008年8月24日に英国でレビュー済み
Amazonで購入
I was a teenage kid when I first heard the edited single version of 'Autobahn' in 1975. That's 1975. Just to re-iterate, 1975 - when only rich rock stars knews what a Moog was, let alone what to do with one. This album was so far ahead of its time, it's untrue.

The years have gone by and I've only become more fascinated by Autobahn. Taken literally, it's a trip down a German motorway rendered with analogue synthesisers. It could have become a camp museum piece, but the spacey, classically-influenced arrangement and wonderful invention have rendered it a classic. There's just something about it that never seems to date.

Kraftwerk would later continue the themes of retro-futurism that they touched upon here, but I don't think they were ever more experimental or more musical. In the bass pulse of the title track, you can hear any number of future music forms. But then in what used to be side two, you can also hear equally sparse invention with a flute. Yes, that's the most influential of electronic bands ever ... with a flute.

I absolutely love this record. It somehow manages to be challenging and comforting at the same time. Like meeting an old acquaintance on friends reunited and finding that they were more fun than ever.
続きを読む
6人のお客様がこれが役に立ったと考えています
役に立った
フィードバックを送信中...
フィードバックをお寄せいただきありがとうございます。
申し訳ありませんが、お客様の投票の記録に失敗しました。もう一度試してください。
違反を報告
レビュー を日本語に翻訳する

Stephen Pate
5つ星のうち5.0 Kraftwerk's 4th LP and its first success is a new entrant in the Grammy Hall of Fame
2015年2月20日に英国でレビュー済み
Amazonで購入
Autobahn by the German experimental group Kraftwerk was a breakthrough album that began decades of electronic music. You can trace or blame Kraftwerk for rock genres like Eurotrance, dance, techno, hip-hop and house etc. Even Disco owes a debt to the drum machine beat of Kraftwerk.

It's been a fun ride and no less so than listening to the still quirky LP Autobahn.

Back in 1974, I didn't pay much attention when the single "Autobahn" made it to the Billboard charts. I was still in my Southern California rock and the nth Bob Dylan phase. I was living on a farm on Prince Edward Island pretty much gone back to the land. Nothing could be further from my mind than techno instrumental rock.

Little did I realize how this type of electronic music would spread. When I got the CD before Christmas 2014 it was like truly weird to be back in the 70's and feel that vibe.

Unlike most rock and roll which is derived from the 1950's fusion of blues, country and gospel AKA Elvis the Pelvis, Kraftwerk were making music grounded in European classical music melted into rock and roll. On "Autobahn" the band was still incorporating organic instruments like flute, guitar, piano and organ long with the multiple synthesizers, vocoder, electronic drums and other electronics.

The LP version of the cut Autobahn is actually 22 minutes long, not 4 minutes like the single. The song is a modal tone poem much like early 20th Century classical music that left the 19th century melodies and lyricism of classical music in the dust. The vocals are simple lyrics played through a vocoder describing the joys of driving on the Autobahn, Germany's high-speed highway. The car door opens and closes, the motor starts, the horn toots and off we go on a 22 minute ride.

Autobahn "capture(s) the feeling of driving on the Autobahn: from travelling through the landscape, the high-speed concentration on the fast lane, to tuning the car radio and the monotony of a long trip. It describes the A 555 from Köln to Bonn--the first Autobahn ever." Wikipedia

If you can get off on music, you will get off on "Autobahn". Melodies are repeated, changed, morphed and unless you speak German you have to let yourself go with the beat and the music. By the time the song stops and the journey is over, my head and heart got a major workout pumping way above normal. The whole album is the rock secular equivalent of John Coltrane's A Love Supreme.

Thankfully the album takes you down after that. The last song ends with daybreak and the sound of birds waking up. We are at peace with the new day with the feeling of Debussy's "Afternoon of a Faun".

"Autobahn" was the 4th album by Kraftwerk and their most completely conceptualized and executed. It was thematic and laid the foundation for other theme LPs that followed like Tour De France  Autobahn and Radio-Activity.

The four members of the band - Ralf Hutter, Florian Schneider, Wolfgang Flur, and Klaus Roder - were so innovative they literally created things we take for granted like the drum machine. Their drum machine experiments included one version that was light activated by the movement of the musician. That idea failed and they reverted to the system we use today of drum triggers and electronic beats.

The band is still touring. There is a great retrospective article in The Guardian you might enjoy. Why Kraftwerk are still the world's most influential band.

What's even more amazing is that Kraftwerk more or less kept to themselves, not answering the phone even. They did not engage in wild rock and roll antics. They just worked on their art at the self-designed Kling Klang Studio in Dusseldorf, Germany.

A lot of rock and roll artists pan electronic drums and beats but they are the way of most popular music. It's rumored that the Texas blues group ZZ Top experimented with electronic drums and drum machines in the early 80's but refused to admit it due to the back lash from fans and other musicians.

The album was remastered in 2009 and sounds excellent. Autobahn - Amazon.com, Amazon.ca in Canada and Amazon.co.uk. I got my copy from Amazon.co.uk in the UK since it cost 1/3rd the price.
続きを読む
2人のお客様がこれが役に立ったと考えています
役に立った
フィードバックを送信中...
フィードバックをお寄せいただきありがとうございます。
申し訳ありませんが、お客様の投票の記録に失敗しました。もう一度試してください。
違反を報告
レビュー を日本語に翻訳する

Mark Govier
5つ星のうち5.0 This cannot be as old as it is...
2015年3月21日に英国でレビュー済み
Amazonで購入
The classic. Fusing "sampled" (tape loop) sounds with vocoders and custom built synthesizer circuits with more traditional noise generators (instruments). Listen carefully and take yourself back to the 1970's. Then think carefully; is this really 40 years old? I wasn't even in high school when this was made and have grown up with it and Kraftwerk's other compositions.

P. Ronayne
5つ星のうち5.0 Masterwerk!
2015年3月2日に英国でレビュー済み
Amazonで購入
What else is there to say about this legendary album? It will never date, it has been incredibly influential, stood the test of time? Its all been said before so I won't repeat it. All I will say is the word Kraftwerk stands for much more than a progressive rock or pop group. It has developed into an art form that will go down in history as a late 20th Century, postmodern movement in music, photography, film, technology and culture that people will talk about 100 years from now and beyond. This was the album that started it all. An historical masterwerk. Nuff said.
続きを読む
1人のお客様がこれが役に立ったと考えています
役に立った
フィードバックを送信中...
フィードバックをお寄せいただきありがとうございます。
申し訳ありませんが、お客様の投票の記録に失敗しました。もう一度試してください。
違反を報告
レビュー を日本語に翻訳する

JOHN BEEBY
5つ星のうち5.0 Cruising on the Autobahn..
2017年7月30日に英国でレビュー済み
Amazonで購入
An excellent album by an excellent band in Kraftwerk the German Pioneers of Electronic music in the early 1970,s. Its easy to pick up their trademark sound which is futuristic and robotic to some degree, anyway they had a lot of success with their albums over the years making them a very popular as well as a Live act..
続きを読む
役に立った
フィードバックを送信中...
フィードバックをお寄せいただきありがとうございます。
申し訳ありませんが、お客様の投票の記録に失敗しました。もう一度試してください。
違反を報告
レビュー を日本語に翻訳する

J. Thomas
5つ星のうち3.0 CD jewel case cracked
2019年5月9日に英国でレビュー済み
Amazonで購入
this is a great album, but posting it in a small padded envelope meant that the jewel case was cracked so badly that I had to replace it.
続きを読む
役に立った
フィードバックを送信中...
フィードバックをお寄せいただきありがとうございます。
申し訳ありませんが、お客様の投票の記録に失敗しました。もう一度試してください。
違反を報告
レビュー を日本語に翻訳する