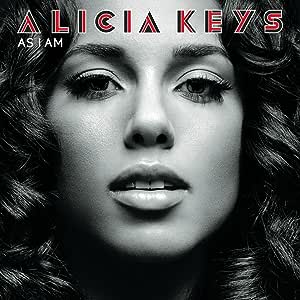 By the time this long-awaited album saw its release date, most fans had probably read at least a couple of interviews with Alicia Keys in which she explained that first single, "No One"--a firestorm of a song clearly born of a sore heart and steeped in serious soul-searching, was about her decision to retreat from the obligations of stardom when she found out a loved one was in need of her care. The anecdote sticks not just because it explained the song so well--you can actually hear the pain, commitment, and determination in her sultry voice--but because it gets at what makes the woman behind the music so appealing. There's only one way R&B artists grow to become legends, and it's by drenching the words they sing with feeling (think Gladys Knight, Roberta Flack). The skeptical listener might have had her doubts before As I Am, but there's no mistaking it now: Alicia Keys is well on her way to sharing a category with them. This record radiates not just old-soul maturity, the kind Alicia fans say makes her modern rarity, but real soul. Vintage-leaning hooks and horns grab hold on "Where Do We Go from Here" and an assortment of other songs, but Keys can also get by just fine without them, as she proves on more pop-flavored numbers like "Lesson Learned," with John Mayer, and "Superwoman." The genres may be smearing, she seems to say, but bring them on: she won't shrink back. Her commitment is not to a single style but to what's stirring her soul. Because of it, she's moving R&B, or something like it, from the hips back to the heart. --Tammy La Gorce

2007 release from the R&B/Pop diva. As I Am is Alicia's most innovative album to date, a collection of music with no boundaries. Influenced by everything from Hip Hop to Soul to Rock to Classical music, As I Am is every bit a sense of rebellion and empowerment. Features collaborations with some of the biggest hit makers in music (Linda Perry, Jack Splash, Mark Batson, Swizz Beats and Kerry Brothers) and includes the first single 'No One.'

Amazon Customer
5つ星のうち4.0 3 stars for the cd on its own merits but 4 stars with the dvd
2008年7月5日に英国でレビュー済み
Amazonで購入
I didn't like this cd as much as Songs in A Minor and The Diary of Alicia Keys.Alicia's voice sounded a little flat and so did the music.My favourite song was "No one" which is a really tuneful and uplifting song you can sing along to.The dvd was good and shows Alicia singing live at the Hollywood Bowl and on a video shoot in Los Angeles and a photo shoot in the Mojave desert.The dvd is about 25 minutes long.
続きを読む
1人のお客様がこれが役に立ったと考えています
違反を報告
レビュー を日本語に翻訳する

Yummy Mummy!
5つ星のうち5.0 Loved it
2013年4月4日に英国でレビュー済み
Amazonで購入
One of the greatest female artist of our time and again she has not disappointed. Smooth sounds and wicked tracks. A must have to add to your collection.
続きを読む
違反を報告
レビュー を日本語に翻訳する

24bit_192khz_Music
5つ星のうち1.0 I enjoyed her past music, This new Album was not that good.
2008年5月25日に英国でレビュー済み
Amazonで購入
Fans will always give her songs a 5 star rating and will not take any negative feedback about the new Album "As I Am".

I've enjoyed her past music and even bought a DVD-Audio 24bit 192khz version which still today sounds clear,

I bought her new Album "As I Am", & played it for the first time but just did not feel the music.

I gave the Album a few months to try again to feel the music but still the album had no feel to it.

It lacked in true R&B soul like which the past Album had a lot of. No true black music feel,

I did not think she offered anything Deep Blue Soul like feel to the new Album. Shame!

Sorry, for the fans, but this is how I feel about the Album in my view.

My view she needs to go back to true black roots and bring back the R&B feel.

e.g. Soul R&B blues to me is like Aretha Franklin song from

"SO AMAZING AN ALL-STAR TRIBUTE TO LUTHER VANDROSS" TRACK NUMBER 5 "A House Is Not A Home" PERFECT!