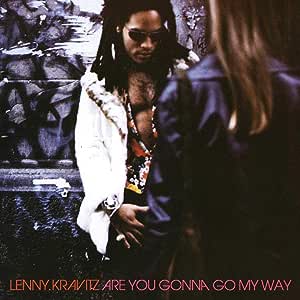 Are You Gonna Go My Way

The irony of Are You Gonna Go My Way is that, by the release of his third album, Lenny Kravitz had finally started internalizing the influences of his musical heroes--Curtis Mayfield, Prince, John Lennon, and Sly Stone--who had been so nakedly copped on Let Love Rule and Mama Said. So what becomes the album's big hit? The title track, a Jimi Hendrix rip-off if there ever was one. Kravitz backslides elsewhere, too: "Is There Any Love in Your Heart" is plainly drawn from Led Zeppelin and "Eleutheria" from Bob Marley, while "Believe" takes a more inventive approach--its chorus is in the style of the Beatles, while the verses and guitar solo again recall Led Zep. What's especially damning about the album though, is that the more Kravitz strikes out on his own, the more lackluster his songs become, evidenced by the dippy come-on "Black Girl" and the weak psychedelia of "My Love." --Daniel Durchholz

Elleppi
5つ星のうち4.0 Kravitz best album, a unique mix of everything you've heard in the last forty years, but in a refreshing way
2015年8月24日に英国でレビュー済み
Amazonで購入
Maybe his best album, very derivative of seventies music but it is not a problem, because this helps it sound familiar like you've owned it and listened to it for ages. That was my feeling when I first listened to it, the year it was released, in 1993.
Kravitz is good at mixing, stealing, reviving old sound and riffs and classic rock and pop references into new songs, that sound all very captivating. Basically there is not one track that sound worst or weaker than the rest of the album. Psychedelic, classic rock, funky, romantic, soft and lounge, plus hard rock and soul. Enjoy!
続きを読む
4人のお客様がこれが役に立ったと考えています
違反を報告
レビュー を日本語に翻訳する

Old Bailey
5つ星のうち3.0 Highway to Hell
2018年5月21日に英国でレビュー済み
Amazonで購入
One good song does not a classic album make. Mostly listenable as background music but the other tracks overshadowed by the opening track.
続きを読む
1人のお客様がこれが役に立ったと考えています
違反を報告
レビュー を日本語に翻訳する