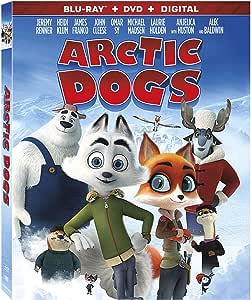 Pickelw
5つ星のうち1.0 Redeem Code Has Issues!!!
2020年2月7日 - (Amazon.com)
Amazonで購入
This code does not work on Moviesanywhere, Vudu, ITunes or Amazon. The movie is only available to me on Apple TV. This is the second code in a month that is not supported across the services mentioned above. You can purchase the title on ITunes. So you have to purchase the movie twice. When the case says digital code included it should work.
続きを読む
レビュー を日本語に翻訳する

B. Lackie
5つ星のうち4.0 Great kids movie
2020年2月11日 - (Amazon.com)
Amazonで購入
My kids watched this and really seem to have liked it. My son said all the characters had great roles and all the scenes made sense to him. He said the movie built up to an entertaining conclusion
続きを読む
レビュー を日本語に翻訳する

The voices of a number of familiar actors add little to “Arctic Dogs,” the first computer-animated feature from Entertainment Studios. Entertainment Studios is the independent media company founded in 1993 by comic Byron Allen to challenge the major motion picture companies.

In “Arctic Dogs,” an Arctic fox named Swifty works in the mailroom of the Arctic Blast Delivery Service, but has dreams of becoming one of the company’s husky couriers. As a means of proving himself, Swifty steals a sled to deliver a mysterious package to a remote location, and inadvertently stumbles a nefarious plot devised by the evil Otto Van Walrus to melt the polar ice cap and take over the world. The ambitious fox needs to enlist the aid of his friends to foil the plot and save the world.

In development for some four years and produced on a relatively hefty budget (for Entertainment Studios) of $50 million, “Arctic Dogs” will likely be enjoyable for its target audience of very young children, but tough sledding for others--particularly adults. The animation is often makeshift and incomplete, with continuity errors so plain that they’re nearly impossible to ignore. Moreover, the design of many of the characters renders them uncomfortably similar to the residents of “Zootopia,” the 2016 animated feature from Walt Disney Studios

Seemingly as a substitute to detract attention from the inferior quality of the animation, the producers hired a cast of familiar names to voice the characters. But while some parents might recognize the voices of, say, Alec Baldwin as Swifty’s polar bear friend or John Cleese as the evil walrus, it’s unlikely that many audience members will exclaim, “Say, isn’t that Jeremy Renner as Swifty?” Worse, most of the voice actors seem to be just reading their scripts, providing voices to the characters but not characterizations, or even emphasis or inflection. Only the reliable Renner as Swifty seems to be attempting anything like actual voice acting.

Directed by Aaron Woodley from a screenplay by Bob Barlen, Cal Brunker, and the director, “Arctic Dogs” is receiving withering reviews from the critics. Rotten Tomatoes reports an approval rating of only 20%, and even the usually forgiving exit audiences polled by CinemaScore award the picture a score B-minus. Playing in 2844 theaters across the United States and Canada, “Arctic Dogs” earned only $3.1 million in ticket sales over its opening weekend, scoring the ninth place spot in the Box Office Mojo Top Ten.

“Arctic Dogs” is rated PG for some mild action and rude humor.