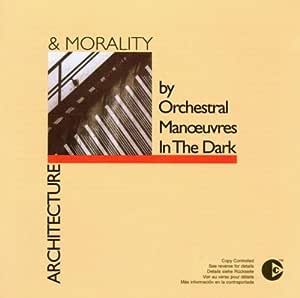 Not only do you get the original 9 tracks, but also seven bonus tracks including an alternate version of Motion and Heart.

D. J. H. Thorn
5つ星のうち5.0 Art and chart action
2009年6月9日に英国でレビュー済み
Amazonで購入
I got into OMD through their 'Electricity' single, which I played for weeks before pouncing on their debut album, perforated sleeve and all. Though I didn't carry on buying their records, I was always interested in hearing their singles, as they never seemed to repeat themselves. The same is true of their album tracks, as much here as on their debut. The difference is that the debut has the lo-fi charm of a band recording on a budget, whereas, by the time of 'A. and M.', their third effort, they had more resources at their disposal. Even so, they don't play safe.

And how many artists could score three hits with such an uncommercial approach? OMD were unpredictable yet accessible. Among a welter of synth- dominated outfits, they thrived despite not wanting to be seen. There were no attention-seeking haircuts and they didn't write about themselves. No tales of teenage angst, instead an oblique, misty love song ('Souvenir') and two songs about a long dead historical heroine, all containing odd, long intros.

As for the other tracks, not for OMD the opening track with the irresistible hook, instead some intriguing percussion and guitar that sounds like a demented George Formby ('New Stone Age'). The title track, meanwhile, sounds like the ultimate in blank music, yet makes compelling listening. The bonus tracks add a great deal to this release and fit in with the overall sound. 'Motion And Heart' reveals that the band can swing a bit too. The sleevenotes confirm the band's penchant for a choral quality at the time, giving the album a more ethereal feel. 'Architecture And Morality' is one of the best albums of the 1980s.

Marcher Lord
5つ星のうち5.0 old memory
2015年1月19日に英国でレビュー済み
Amazonで購入
My late wife bought me this album on cassette years ago . I loved it back then but when cassettes went out of vogue it got lost somewhere. I bought this version , it is just as brilliant now as it was then and I love it. The bonus tracks are just that , a bonus.
続きを読む
役に立った
フィードバックを送信中...
フィードバックをお寄せいただきありがとうございます。
申し訳ありませんが、お客様の投票の記録に失敗しました。もう一度試してください。
違反を報告
レビュー を日本語に翻訳する

Haunting, Atmospheric and Otherworldly, a masterclass in the use of analogue synths.