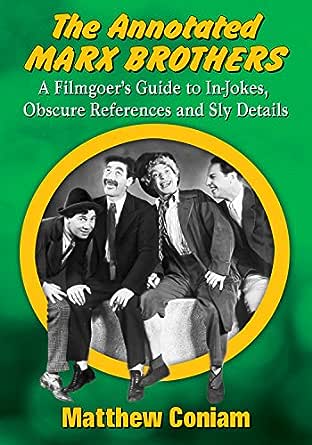 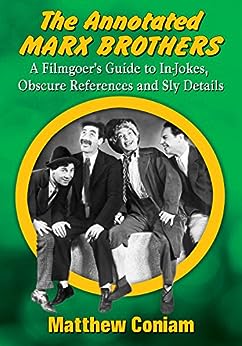 "Coniam has done a remarkable service for viewers of Marx Brothers films with this collection of answers to comedy ponderables...highly recommended"--Choice; "it's gold to a real Marx Brothers fan"--Communication Booknotes Quarterly; "very interesting, entertaining, and enlightening...impressive...the quintessential look at the comedy team's films...indispensible"--Examiner; "it might have been thought that there was nothing new to add to the legions of books on the Marx brothers, and then along comes this worthy and funny book...invaluable for the modern audience for the Marx Brothers...highly recommended"--Destructive Music; "an invaluable guide to some of the most surrealistic comedies ever produced in Hollywood"--Crime Time; "I've been hoping that someone would write a book like this. Now, when somebody doesn't get Groucho's joke about the Irish chiropodist in Animal Crackers. I don't have to explain it. I can just point to this book!"--Randy Skretvedt, author of Laurel and Hardy: The Magic Behind the Movies. --このテキストは、paperback版に関連付けられています。

Matthew Coniam has contributed to numerous books, magazines, journals and websites in Britain and America. He lives in Bath, England. --このテキストは、paperback版に関連付けられています。

rindulus
5つ星のうち2.0 Amateur.
2020年4月26日に英国でレビュー済み
Amazonで購入
Tiresome. This guy claims to like The Marx Brothers. Then, like a child, picks apart every film they made. Duck Soup is widely acclaimed as the best film they did. It is certainly their most famous. Does this “Marx Brothers Fan” agree? Nope. To him it is among the worst. Fair enough....and it is right & fair to be critical.......but he doesn’t appear to like ANY of their films. So why write the book at all if all you can do is sneer?

AN1980
5つ星のうち5.0 A wonderful edition to the Marx Bros library!
2016年7月10日に英国でレビュー済み
Amazonで購入
A really well researched book and an excellent edition to the Marx Brothers library. A fantastically original concept which highlights and provides answers to many of the obscure jokes, references and stories behind each Marx Brothers' films. The author's opinions often resonate with my own experiences of watching the films which is amusing as for years I thought I was on my own in wondering what a college widow was, now I know! The cross references to other Marx Brothers' texts will also inspire you to dust off your old copies for further reading.

A very well presented and well written book which is easy to read and extremely enjoyable for the avid fan or those new to the Brothers!

Liquid Swords
5つ星のうち3.0 Plenty of information but too opinionated
2016年5月5日に英国でレビュー済み
Amazonで購入
I would put this in the same bracket as Joe Adamson's book in that it is clearly well researched but I found it too opinionated.

Each chapter is each film with some general information followed by much closer details from certain scenes in them. Some of these details were good in that they explain long dated references and jokes but some are more tedious and only important to the "comic book guy" esq people out there.

Some chapters he gives a briefer explanation of his personal feelings towards the movie then moves on, which is fair enough. In others, such as Duck Soup, he seems to spend the entire chapter slating the film and making sure we all realise why he's correct and we're wrong. I understand it's all opinion about which films are best, but when someone unashamedly defends Room Service & Love Happy but is quite hostile towards Duck Soup, A Day at the Races and Go West, it just seems like they've spent so long analysing everything (despite his many objections to the contrary) that they've gotten too close and lost all persepective.

There are also a few instances where he addresses some long standing stories/ legends about the brothers and dismisses them for no real reason other than he thinks they're rubbish. He may be correct, but it was the way it's wrote with authority without indisputable facts that began to grate.

It's worth a read for the factual details (although maybe not the price it's currently on sale for!) but I wish I could unread quite a bit of it. There seems to be a few books about my precious Marx Brothers that are a lot of opinion and I hope it stops before history gets completely re-written.

To contradict this I might check out Gimme a Thrill: The Story of I'll Say She Is, which sounds like it could be a genuinely new and interesting subject on the brothers.
続きを読む
2人のお客様がこれが役に立ったと考えています
違反を報告
レビュー を日本語に翻訳する
すべてのレビューを参照します
click to open popover
Amazonプライム会員ならお急ぎ便、日時指定便が使い放題
さらに、映画もTV番組も見放題。200万曲が聴き放題 。クラウドに好きなだけ写真も保存可能。
> プライムを無料で試す