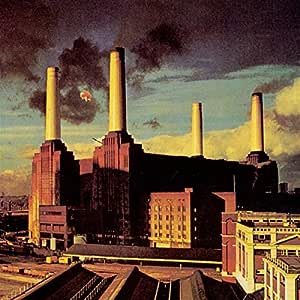 PINK FLOYD Animals (Dutch No.1 Albums series 5-track PICTURE DISC CD album in effect the pan-European issue with the disc manufactured in Italy. Complete with lyric booklet picture sleeve plus Legendary No.1 Albums booklet and stickered case. This pressing is circa 2001 and the full colour picture CD graphics are excellent - worthy of a place in any PF collection)

Although not in the same vein as the deliciously hallucinogenic earlier Floyd works such as Ummagumma and Dark Side of the Moon, Animals is innovative and musically diverse in its own right. Inspired in part by George Orwell's political fable Animal Farm, Roger Waters condemns the avarice and inequalities of capitalism, metaphorically and musically grouping humans as pigs, dogs, and sheep. The pigs are self-righteous hypocrites inflicting their beliefs on everyone else, the dogs greedy money-grabbers, and the sheep witless followers. Dark, cynical, and brilliantly composed, Animals is an ingenious and under-acknowledged album. --Naomi Gesinger

Jimi Man
5つ星のうち5.0 Much better than my previous CD copy
2018年3月21日に英国でレビュー済み
形式: CDAmazonで購入
This review isn't of the music itself as other reviewers will probably cover that aspect, and I'm sure most people reading this will already be more than familiar with this album. This is a comparative review with an older release.

I have compared this 2011 remaster with a second hand late 80s or early 90s CD release by EMI Records (not sure of the exact date as it's not stated on the disc or in the booklet). I used a twin deck Sony CD player/recorder through a Denon amplifer to ensure a direct comparison on the same equipment. No equalisation was applied during listening.

Track 1, "Pigs On The Wing 1", is acoustic/vocal only. It is immediately apparent that the guitar is crisper-sounding and more detailed on this new copy, and the vocal is clearer whilst being more rounded and with more depth.

The same can be said for the opening to Track 2, "Dogs", with the addition of a quiet keyboard part that is less hidden in the background. Then the drums, bass and rhythm guitar kick in with a punchier feel and better separation. The lead guitar is also more prominent. The track continues in this vein with both loud and quiet sections being more open sounding and each instrument more distinct than in the muddier mix of the older EMI version. The barking dogs and human whistles are subtly blended in without being almost hidden away as before.

Track 3, "Pigs (Three Different Ones)", has the bass guitar playing a more prominent role in the mix without overshadowing the other instrumentation, vocals or sound effects/animal noises.

Track 4, "Sheep", continues with the same refinements in clarity, all-round 'feel' and separation as described above.

Overall this is a massively improved listening experience over the earlier CD release which presumably is nearer to the original vinyl mix, as were many of the CDs from that era, and which was never appropriate for the greater dynamic range of digital technology. I wish I'd bought this one years ago.
続きを読む
42人のお客様がこれが役に立ったと考えています
役に立った
フィードバックを送信中...
フィードバックをお寄せいただきありがとうございます。
申し訳ありませんが、お客様の投票の記録に失敗しました。もう一度試してください。
違反を報告
レビュー を日本語に翻訳する

jugula
5つ星のうち5.0 Stunningly Dark
2018年3月29日に英国でレビュー済み
Amazonで購入
It’s Pink Floyd, it’s vinyl, it’s 1977, punk and all that but Roger Waters hit his peak lyrically with the dark, angry Animals, add in stunning guitar work from David Gilmour, atmospheric keyboards from Rick Wright all backed by the steady as ever Nick Mason and you’ve got a masterpiece to blow the punks away!
続きを読む
13人のお客様がこれが役に立ったと考えています
役に立った
フィードバックを送信中...
フィードバックをお寄せいただきありがとうございます。
申し訳ありませんが、お客様の投票の記録に失敗しました。もう一度試してください。
違反を報告
レビュー を日本語に翻訳する

Ian Gordon
5つ星のうち5.0 Classic.
2019年6月21日に英国でレビュー済み
形式: CDAmazonで購入
I still have this on vinyl which I bought in 1977. I converted it to MP3 format, but there are always slight crackles, and the odd jump on the original. As it was for playing in the car, I decided to "upgrade" to the CD and the results are amazing. Although there are only 5 tracks on the whole album, there are 2 classics (Sheep and Dogs being my favourites) on this album. This is a must for any serious fan of Pink Floyd. Very enjoyable to listed to, it seems to stand up well despite being over 40 years old. Would certainly recommend.
続きを読む
3人のお客様がこれが役に立ったと考えています
役に立った
フィードバックを送信中...
フィードバックをお寄せいただきありがとうございます。
申し訳ありませんが、お客様の投票の記録に失敗しました。もう一度試してください。
違反を報告
レビュー を日本語に翻訳する

Dale A. Haines
5つ星のうち5.0 Pink Floyd at their best
2015年8月16日に英国でレビュー済み
形式: CDAmazonで購入
This was purchased to finally replace my vinyl version .
As I said with my review of Ummagumma, I'm not sure that the remastering actually enhances the original recordings that much but, each to his own.
The high frequencies seem to be muted somewhat but over all, still an excellent example of Pink Floyd at their finest
I'd say again that my biggest complaint is that Animals is supplied simply in a very tight fitting cardboard wrapper.As with Ummagumma it is SO tight that getting the discs out is extremely difficult.
If, like me, you don't want to touch the playing surface with your fingers then you'll be screwed. I transferred mine into library cases immediately.
If you are a Pink Floyd fan then I need say no more. If you're just becoming aware of one of musics greatest ever bands then add this to your collection.
続きを読む
10人のお客様がこれが役に立ったと考えています
役に立った
フィードバックを送信中...
フィードバックをお寄せいただきありがとうございます。
申し訳ありませんが、お客様の投票の記録に失敗しました。もう一度試してください。
違反を報告
レビュー を日本語に翻訳する
その他の国際レビューを読み込む

Mr Blackwell
5つ星のうち5.0 Animal Crackers
2012年12月22日に英国でレビュー済み
形式: CDAmazonで購入
Took a while but i finally got around to purchasing this 2012 remaster(specifically because there was no extra's),for me the 4 albums released from DARK SIDE.... thru to the '....WALL' are the high point in Floyd's history,4 incredible releases,arguably this is the best and yet the least talked about.

As with the others,this is a digipak release,with tight fitting CD and glossy booklet which is murder to put back in the sleeve,so annoying that EMI can be so shoddy and cheap.

But the sound quality is fantastic,didnt hear too much difference on the Dark Side release,but this one,well its there for all to hear,the clarity breathtaking,acoustic guitars to the fore more than previous releases,the drums,to my ears more prominent and if its possible,Roger's vocals even more chilling,listening with the headphones,this new release is quite spectacular.

The music was never in doubt,Floyd perfection to the fore,Roger ranting at the world,the way Punk wanted to but wasnt quite able to ,the irony that bands like Floyd were wanted dead and here they were agreeing with some if not all of punk's sentiments(although still have a 'punk' mate who spews forth venom at the mere mention of Floyd).

Highlights,well all of it really although if pushed the epic 'Dogs' with stun guitar from Dave Gilmour whilst 'Sheep' and 'Pigs' are quite sinsiter with Rick's keyboards enhancing the malevolant mood,yeh like i said ,all of it ,really.

Ignoring the poor packaging and no extra's,(the Snowy white track found on the american 8 tracks would have been fantastic) but it would still be churlish to award anything less than 5 stars
続きを読む
11人のお客様がこれが役に立ったと考えています
役に立った
フィードバックを送信中...
フィードバックをお寄せいただきありがとうございます。
申し訳ありませんが、お客様の投票の記録に失敗しました。もう一度試してください。
違反を報告
レビュー を日本語に翻訳する

tick tock
5つ星のうち5.0 Pink Floyd's 'forgotten' album?........
2014年4月30日に英国でレビュー済み
形式: CDAmazonで購入
Love this.
After all the huff and puff of Wish You Were Here,Animals settles down to some straightforward Roger Waters bile at society.
The album is essentially tracks form an abandoned concept album based on Orwell's Animal Farm.
Waters vents on the hypocrisy and weakness of society's values and capitalism's ruthless nature,to name but two.
Gilmour mucks in with some awesome guitar licks and usual great vocal contributions.
Personally,I prefer this to Wish You Were Here.
Animals doesn't sag towards the end and its a more consistent listen overall I believe.
It has a more direct,no-nonsense approach,and a more abrasive aggressive attack.
One of the more popular Floyd albums in my collection.
Recommended
続きを読む
10人のお客様がこれが役に立ったと考えています
役に立った
フィードバックを送信中...
フィードバックをお寄せいただきありがとうございます。
申し訳ありませんが、お客様の投票の記録に失敗しました。もう一度試してください。
違反を報告
レビュー を日本語に翻訳する

Shaun Rowe
5つ星のうち5.0 Which one's pink? Oh, wrong album...
2016年11月21日に英国でレビュー済み
Amazonで購入
Pre ordered the repressing of this classic, back in April. So to say I've been waiting a while is a slight understatement! To my ear the Vinyl sounds great on both sides - although after seeing other people reviews, I know the sound quality has been called into question. My copy sounds great so I really can't complain. I hope the people who have had issues get it resolved quickly because this really is a legendary album, everybody should own.
続きを読む
2人のお客様がこれが役に立ったと考えています
役に立った
フィードバックを送信中...
フィードバックをお寄せいただきありがとうございます。
申し訳ありませんが、お客様の投票の記録に失敗しました。もう一度試してください。
違反を報告
レビュー を日本語に翻訳する

Christopher Graham
5つ星のうち1.0 Product looks used as opened.
2019年2月17日に英国でレビュー済み
Amazonで購入
As per the pictures, cellophane wrapping was opened and sticker taped across end to stop records falling out and gate-fold opening. This was bought as a gift but can not be given in this condition as looks used and sleeve will be damaged when sticker is removed. Unsure as to condition of product inside as intending to return as received. Very disappointing
続きを読む

C. B. Willans
5つ星のうち5.0 Animals what a discovery!!!!
2013年3月23日に英国でレビュー済み
形式: CDAmazonで購入
I Bought Animals (Discovery Edition) 3 weeks ago and I can't believe how brilliant and clear it is! In my teens I was mad on "Dark Side" and "Wish You Were Here" on vynyl then CD version but for some reason I never heard or bought Animals probably because I thought Roger had lost it naming 3 tracks after Pigs, Dogs and Sheep how wrong I was! I didn't and still don't like "The Wall" apart from a couple of tracks "Run Like Hell" and "Comfortably Numb"

3 main tracks,
1. Dogs - Great guitar work by Dave Gilmour and vocals by Roger Waters
2. Pigs (Three Different Ones)- My favourite track - great work by all the band
3. Sheep - Another great track played by the band at their peak.

I have "Wish You Were Here" and "Dark Side" also on Discovery Editions but they don't seem as clear as Animals!

I can't stop playing this on my Nano, CD player in the car and on my home stereo with earphones on which is very impressive indeed.

Chris
5つ星のうち5.0 Excelleng sound and quality, just make sure you got a good Hi-Fi setup!
2020年2月17日に英国でレビュー済み
Amazonで購入
Got this for my audiophile dad. He owned the original copy but it wasn't exacylu in great condition. This reissue seemes to be very quiet and great sounding on his setup.

Just bare in mind being a heavyweight vinyl, some basic turntables wont make the most of the extra detail. To take full advantage, you will need a good player, stylus and seperates setup. Otherwise, just stick to the CD!
続きを読む
役に立った
フィードバックを送信中...
フィードバックをお寄せいただきありがとうございます。
申し訳ありませんが、お客様の投票の記録に失敗しました。もう一度試してください。
違反を報告
レビュー を日本語に翻訳する

Ben Basing
5つ星のうち5.0 An actual improvement
2014年4月12日に英国でレビュー済み
Amazonで購入
Animals was the first Floyd album I bought as a new release, I bought Meddle at the same time and always played Meddle much more, Animals seemed to be barrel scrapings from Darkside and more clearly Wish You Were Here. Thirty five years later the new remix pushed me to attend to what was going on, amid the familiarity there are four musicians working together as they always did. Despite the theme, or should we say 'concept' we have not yet got to the theatricality of The Wall, Animals was never going to be Darkside Volume Three, but the new remix does show that there is a band behind the brand.
続きを読む
役に立った
フィードバックを送信中...
フィードバックをお寄せいただきありがとうございます。
申し訳ありませんが、お客様の投票の記録に失敗しました。もう一度試してください。
違反を報告
レビュー を日本語に翻訳する

bart4books
5つ星のうち5.0 At the top of their game.
2015年11月4日に英国でレビュー済み
形式: CDAmazonで購入
This album was not well received when it first came out. I couldn't understand that at the time and now I've bought the CD I still can't work out why. Yes it had a hard act to follow with Wish You Were Here but in my opinion it does. If you listen to Meddle and Dark Side of the Moon you notice there are substantial filler pieces. Not on this album. It is solid and inventive throughout.
Not many younger people will know Mary Whitehouse but the verse excoriating her is still powerful and spot on.
続きを読む
役に立った
フィードバックを送信中...
フィードバックをお寄せいただきありがとうございます。
申し訳ありませんが、お客様の投票の記録に失敗しました。もう一度試してください。
違反を報告
レビュー を日本語に翻訳する