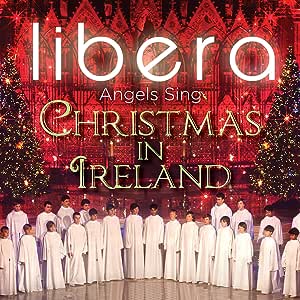 This Christmas, boy choir super-group Libera bring their angelic voices and inspiring music to the holiday season with a new CD: Angels Sing - Christmas in Ireland. The program features beloved carols old and new, sacred and secular, joyful and tender - all recorded live in the radiant ambiance of St Patrick's Cathedral in Armagh, Ireland. This inspiring concert features favorites such as 'Carol of the Bells,' 'Joy to the World,' 'Silent Night,' 'Danny Boy' and more. Six of the tracks are previously unreleased, and the remaining songs all feature brand-new arrangements made especially for this recording.

Jeff Carter
5つ星のうち5.0 Christmas As It Should Be
2013年11月5日に英国でレビュー済み
Amazonで購入
So, the long-awaited CD and DVD of Libera's Christmas concert recorded live at Armagh Cathedral has arrived. And, I am sure, the first question to be asked by those who purchased their Christmas album of two years ago must be "As many of the songs are already featured on the previous CD, is it worth purchasing this album?"

The answer is a resounding "YES!" Quite apart from the handful of songs that do not appear on their earlier offering (more about them later!), there is the unmistakable atmosphere that you experience at a Libera concert. The only thing missing in that respect is the audience reaction, which has either been skilfully edited out or maybe these CD tracks were recorded separately without the audience in attendance. Either way, it makes no difference. This is 'Live' Libera at its best and if you do wish to hear the applause, I would urge you to purchase the DVD as well, as I have.

All the tracks have a distinctly Irish feel, largely due to the additional instrumentation such as the Irish flute and violin. And while we're on the subject of Irish music, listen particularly to Track 7: "Danny Boy" sung completely unaccompanied with ten-year-old Isaac London taking the solo. This track alone is worth the price of this amazing CD. There is also a version of "Gaudete", a Libera favourite from way back. The final track is "What Child Is This" sung to the tune of Greensleeves: absolutely superb.

Tsungen
5つ星のうち5.0 Yet Another Masterpiece!!!
2013年11月13日に英国でレビュー済み
Amazonで購入
In 2011, I was one of the many fans who requested a Christmas Album from Libera;
my wish came true and I was not disappointed; now two years later (2013), Surprise!!
Libera and Mr. Robert Prizeman release another Christmas album both in CD and DVD versions!

It is amazing, to say the least; I was weary of the idea that many songs were repeats
from he previous Christmas CD, but to my amazement, the songs have been completely
rearranged with instrumental intros and fuller orchestration; The 'Pachelbel Canon' (Sanctus)
is absolutely breathtaking; my favorite piece 'Carol of the Bells' is even better than the
previous version, as if that's possible...I could go on and on, but what I mean to say is that
if you appreciate choir music and Christmas songs as well, you will be in a state of trance almost.

Libera is several notches above all choir bands; for the quality of their voices, their versatility,
and the passion they put in their performances (finally a choir that Smiles); this is a must
for the Holidays, be sure to get the DVD as well; if Libera is new to you, you will be very
happy with what they have to offer!!

A great thanks to all Libera singers, to Robert Prizeman for his arrangements and conducting,
an extra thank you for including several the 'older' singers like Joshua Madine, ensuring the continuation
of the Libera tradition as his smile was (still is) the 'face' of Libera for a decade. Cheers and thanks again!
続きを読む
7人のお客様がこれが役に立ったと考えています
役に立った
フィードバックを送信中...
フィードバックをお寄せいただきありがとうございます。
申し訳ありませんが、お客様の投票の記録に失敗しました。もう一度試してください。
違反を報告
レビュー を日本語に翻訳する

Amazon Customer
5つ星のうち1.0 I am very disappointed that the carol
2017年5月17日に英国でレビュー済み
Amazonで購入
I am very disappointed that the carol,"O Holy Night" is NOT the same as on You Tube.It does state this is from the Christmas in Ireland.On you tube we see 1 boy,Ralph?and then another Stefan? sing solos and then the rest sing.Its so beautiful. When I first heard it i was in tears.I play the You Tibe every 2 or3 days.There is something Heavenly the way the lights shine on the boys in the front.Anyway ive said my piece.Congrats boys.Love from Down Under.
続きを読む
1人のお客様がこれが役に立ったと考えています
役に立った
フィードバックを送信中...
フィードバックをお寄せいただきありがとうございます。
申し訳ありませんが、お客様の投票の記録に失敗しました。もう一度試してください。
違反を報告
レビュー を日本語に翻訳する

Mauve Peace
5つ星のうち4.0 Choir of Angels
2014年1月7日に英国でレビュー済み
Amazonで購入
I saw Libera at the Royal Albert Hall for the Big Sing in October 2013, and seeing it on Songs of Praise later, made me want to look up their catalogue. This is a lovely album. It's as good a Christmas album as any. the boy trebles are simply divine.