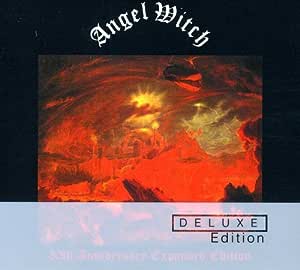 First issued in 1980, Angel Witch's eponymous debut draws heavily upon satanic and witchcraft imagery with the band's sound displaying a fiercely dark mixture of gothic melody mixed with weighty guitar riffs comparable to vintage Black Sabbath. Although never a huge commercial success, the album brought the band a loyal underground following and later inspired the emerging San Francisco Bay Area thrash metal scene with bands like Metallica and Testament citing Angel Witch as a major influence on their musical direction. This NOWBHM classic is widely regarded amongst fans as the band's finest hour. For this 30th Anniversary Deluxe Expanded Edition the band's entire recorded output from this era has been included. With BBC Friday Rock Show session tracks along with a complete second disc of rare demo's, alternative versions and 12" single mixes, makes this the definitive Angel Witch Anniversary collection.

Mike Reed
5つ星のうち5.0 Angel Witch - 'Angel Witch - 30th Anniversary Deluxe Edition' (UME)
2012年10月26日 - (Amazon.com)
形式: CDAmazonで購入
Wow! Just when you thought that they had milked the 1980 Angel Witch debut lp for all that it was worth. First we got the CD reissue awhile back, then the CD re-released (again) with several bonus tracks. Now, UME has decided to give us worthy followers an expanded 2-CD edition [mind you] of this most under-rated / under-appreciated New Wave Of British Heavy Metal gem. Here, you get the lp's original ten tracks + a whopping twenty bonus cuts. Disc one tags on a rare four track mini-concert (if you want to call it that) gig from the BBC Friday Rock Show in early 1980. Disc two has a boatload of (good sounding) demos, 12" hard-to-find singles and 7" single edits. I don't know about the rest of you - but the heck with the downloads - as I want the physical copy of this must-have 2-CD expanded reissue. So highly recommended, that it hurts.
続きを読む
17人のお客様がこれが役に立ったと考えています
レビュー を日本語に翻訳する

Crooked Sinner
5つ星のうち5.0 Killer!
2018年8月6日 - (Amazon.com)
Amazonで購入
This is a solid addition to any metalheads collection. Angel Witch's title track still holds up to this day even when stacked against titans like Mastadon and Five Finger Death Punch.
続きを読む
2人のお客様がこれが役に立ったと考えています
レビュー を日本語に翻訳する

David Cotignola
5つ星のうち5.0 A Masterpiece
2015年6月3日 - (Amazon.com)
形式: CDAmazonで購入
Absolutely essential to all metal fans. This piece of history has only gotten better with age. This band was so close to being one of the HUGE bands of the 80s and if you can grab this deluxe edition - DO IT. Sit back and crank "Free Man" at 11! You'll be happy you did!!
続きを読む
4人のお客様がこれが役に立ったと考えています
レビュー を日本語に翻訳する