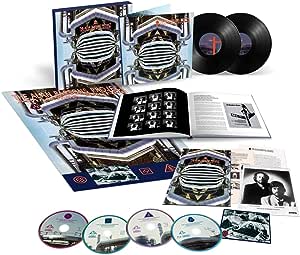 Limited deluxe three CD + Blu-ray + double vinyl LP (pressed at 45RPM) box set of the classic album Ammonia Avenue by The Alan Parsons Project. The set has been newly re-mastered from the original master tapes under the supervision of Alan Parsons and features an additional 53 bonus tracks drawn from Eric Woolfson's songwriting diaries, studio session out-takes and stunning new 5. 1 surround sound and stereo mixes from the original multi-track master tapes by Alan Parsons and the promotional videos of 'Don't Answer Me' and 'Prime Time'. This stunning set also features a lavish illustrated book with a new essay with unseen photos and features recollections from Alan Parsons, the Woolfson family and from musicians Ian Bairnson and David Paton. It also includes a reproduction poster and a reproduction press kit folder. This deluxe edition of Ammonia Avenue is the definitive treatment of a special album. First released in February 1984, Ammonia Avenue was the seventh album by The Alan Parsons Project, the brainchild of composer, musician and singer Eric Woolfson and celebrated producer and engineer Alan Parsons.

John
5つ星のうち5.0 Brilliant!
2020年4月25日に英国でレビュー済み
Amazonで購入
I have to admit that I am possibly biased because I am a real fan of the Alan Parsons Project and buy all new releases, however, I rarely leave reviews so the fact that I am doing so here says something!

I would have bought the Box Set anyway but was particularly interested in the 5.1 Blu-ray. I am not disappointed the box arrived this week, the packaging is stunning, the book and the facsimile press pack, poster etc. adds interest. The Blu-ray 5.1 mix is simply fantastic. Obviously fans of the Project will enjoy this but for those that are not this album (and possibly Eye in the Sky) would be a good start for people who wanted an good example of Parsons' work. I have revisited the album today and had forgotten how good it actually is.

£85 is a lot to pay for the box so I'd suggest that people interested download or preview a few tracks, on this album Ammonia Avenue would be worth a listen to start with and Old and Wise, to follow from Eye in the Sky. I think people will be pleasantly surprised! Personally I have always found it odd that Parsons did much better in the US and Mainland Europe than in their own country (the UK). If anybody gets into them though, there is a huge body of music to explore.
続きを読む
1人のお客様がこれが役に立ったと考えています
違反を報告
レビュー を日本語に翻訳する

G. Gampell
5つ星のうち4.0 Wonderful re-issue with a small caveat
2020年6月7日に英国でレビュー済み
Amazonで購入
Last year I bought the 5.1 blu rau re-issue of Eye in The Sky, this year I went "whole hog" and bought the full set when Ammonia Avenue was released. The artwork and booklet are superb, the but 5.1 mix is a bit over the top, I never thought I would say that, I love surround sound, but here (and in my opinion only) the surround channels are tad over used. In this case I have largely chosen to listen to the stereo remaster. In itself that's great because it encourages me to use the vinyl copy. I would give 4.5 stars if I could,
続きを読む
違反を報告
レビュー を日本語に翻訳する

Friendlycard
5つ星のうち4.0 Parsons goes pop/rock?
2008年10月28日に英国でレビュー済み
Amazonで購入
After purchasing this installment in the excellent Alan Parsons Project reissue programme, I realised quite how much I'd under-rated this album when it first appeared back in 1984. The seventh Project outing was markedly different from its predecessors but, whilst I still don't think it's the Project's best album, it's an enjoyable listen and has some real high-points. Please note that four stars is a judgement relative to other APP albums - considered more broadly, all APP albums are emphatically five-star material. No one has done this sort of thing better.

The first five APP albums were innovative, leading-edge progressive rock. 'Eye in the Sky' was slightly more commercial, and this trend continued with 'Ammonia Avenue', which moved more into the pop/rock mainstream. The Project was evolving from progressive rock into a pop/rock band - and, in my opinion, did this better than anyone else.

An immediately noticeable feature of 'Ammonia Avenue' was that the nine tracks included a string of catchy, rocky cuts, any one of which could have been a hit single. 'Prime Time' was perhaps the most commercial-sounding APP track to date (which is in no way a criticism - I love it). 'Let Me Go Home' is a typically gutsy vocal performance from Project stalwart Lenny Zakatek. 'One Good Reason' packs a real punch through great percussion and Eric Woolfson's finely-crafted vocals. 'Don't Answer Me' (featuring Woolfson again) is another catchy cut. 'Dancing on a Highwire' struck me at the time (and still does) as being the best track on the album, with Colin Blunstone excellent on lead vocals. 'You Don't Believe' is another rocker, with Zakatek again belting out a great gutsy vocal. 'Pipeline' is a typically classy APP instrumental.

For me, the two slower tracks don't quite measure up to the standard set by these rockers, but no matter - 'Ammonia Avenue' is a great collection of songs.

The reissue is welcome, featuring subtle remastering and the customary fascinating set of bonus tracks which, via rough mixes, demos and guide vocals, give a great insight into the production process. A departure from the earlier albums, then, but an outstanding collection of great songs by one of rock music's all-time great acts.
続きを読む
14人のお客様がこれが役に立ったと考えています
違反を報告
レビュー を日本語に翻訳する

jonathan p robinson
5つ星のうち4.0 The sound of the music
2020年2月29日に英国でレビュー済み
Amazonで購入
I have two previous albums by this band, one excellent, the other not of the same standard. This one was back towards the excellent st
andard. Well worth the purchase price.
続きを読む
1人のお客様がこれが役に立ったと考えています
違反を報告
レビュー を日本語に翻訳する

Monsieur le B
5つ星のうち3.0 Better Than Average
2012年4月18日に英国でレビュー済み
Amazonで購入
This is probably their most radio friendly album. A strictly AOR selection particularly attractive to USA audiences in the mid 80s, this album has the professional engineering hallmarks of Parsons. 'Prime Time',the Spectoresque 'Don't Answer Me', 'Dancing On A Highwire' and the title track are the four/five star standouts. It is no coincidence that these feature either the late Eric Woolfson or Colin Blunstone on lead vocals. I usually find other Parsons vocalists pretty bland and they usually get the average material to perform. Consequently, despite some really classy stuff, the inconsistency of the album drops the rating to a 3.
続きを読む
違反を報告
レビュー を日本語に翻訳する
すべてのレビューを参照します
Amazonプライム会員ならお急ぎ便、日時指定便が使い放題
さらに、映画もTV番組も見放題。200万曲が聴き放題 。クラウドに好きなだけ写真も保存可能。
> プライムを無料で試す