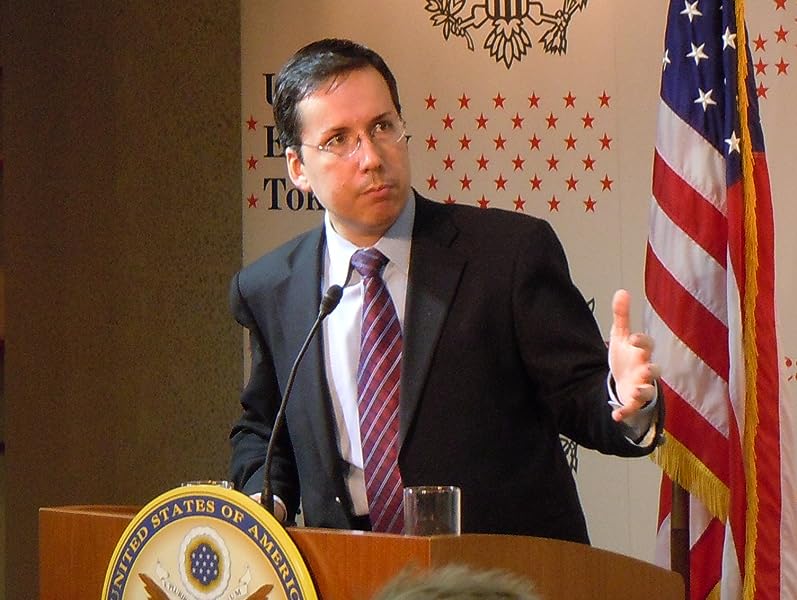 Nicholas Kralev is an international affairs expert and entrepreneur. A former Financial Times and Washington Times correspondent, for more than a decade he witnessed the conduct of American diplomacy while accompanying four U.S. secretaries of state on their travels around the world -- Hillary Clinton, Condoleezza Rice, Colin Powell and Madeleine Albright. His work as a journalist, speaker, educator and consultant has taken him to over 100 countries.

J&SLeavitt
5つ星のうち4.0 Great, handy volume for aspiring or new diplomats
2013年11月15日にアメリカ合衆国でレビュー済み
Amazonで購入
Probably a three-star for long-time members of the Foreign Service, but a solid four-star for those unfamiliar with the Foreign Service and relatively new hires. "America's Other Army" ought to be required reading in the Foreign Service's orientation course, as it more succinctly, accurately, and engagingly traces the contours of State, outlines the roles of each Foreign Service cone, and identifies the main issues and debates swirling around Foggy Bottom better than anything I experienced during my orientation a little over a year ago. Now, having stumbled around the bureaucracy for a full year and still feeling pretty bewildered by its scope and inertia, I found in "America's Other Army" a nice wrap-up of most everything I've learned so far. Plus, it's encouraging to suddenly know that the shortcomings and oddities I've discovered over the past year, isolated at a small consulate in the field, aren't just me getting quickly jaded -- rather, at least some of my issues are widespread or longstanding issues that the Department is at least talking about. I wouldn't have known without picking up the book -- or serving a tour in Washington in five or six years. Reading the book is much more convenient.

Long-time diplomats may find little new here, and non-State personnel may find the vocabulary of diplomacy unfamiliar and unwieldy. But, again, newbies know the lingo but not necessarily the issues. And the issues are all here in a nice little quick-read volume.

Anne E. Grimes
5つ星のうち4.0 Learn About the U.S. Foreign Service
2013年5月12日にアメリカ合衆国でレビュー済み
Amazonで購入
As a practicing foreign service officer, I found this to be one of the best books on the foreign service that I've read. If you want a good overview of what the foreign service does, this book is for you. On the other hand, I often found myself wanting to say to the author, "wait, that has not been my experience." It's not apparent how the author found/picked the sources for the book, particularly those in the mid and lower ranks, and I don't see as good a representation or analysis of generational differences in the FS asI would like. All that being said, I found it a great read!
続きを読む
役に立った
フィードバックを送信中...
フィードバックをお寄せいただきありがとうございます。
申し訳ありませんが、お客様の投票の記録に失敗しました。もう一度試してください。
違反を報告
レビュー を日本語に翻訳する
その他の国際レビューを読み込む

P. Elliot
5つ星のうち4.0 Solid and informative
2016年8月29日にアメリカ合衆国でレビュー済み
Amazonで購入
It won't give you a piercing insight into all the challenges of the foreign service, but it does an excellent job of putting in plain English the many aspects of our work that Americans don't understand but take for granted. A solid primer.
続きを読む
1人のお客様がこれが役に立ったと考えています
役に立った
フィードバックを送信中...
フィードバックをお寄せいただきありがとうございます。
申し訳ありませんが、お客様の投票の記録に失敗しました。もう一度試してください。
違反を報告
レビュー を日本語に翻訳する

globetrotter.fam
5つ星のうち4.0 A Must Read for Anyone Considering Joining
2013年1月1日にアメリカ合衆国でレビュー済み
Amazonで購入
I have been working for the Foreign Service for about six years now, so my opinion of Mr. Kralev's book may be a little biased. I think this is an excellent introduction into what the Foreign Service does, the realities of our work, the challenges we face, leadership shortcomings, and both successes and failures we have had in our recent history. Anyone who is considering joining the service should read this book first. I think it provides a realistic view of what you'll be doing, and not all of it is glamorous, adventurous, travel. All of us have hauled somebody's suitcases, or scrambled to find dinner reservations for a visiting official, or spent countless days stuck behind a computer in a cubicle trying to put final edits on a Congressional-mandated report. This is also an excellent book for anyone who is curious about how American diplomacy works (or doesn't). I particularly appreciated the section on consular work and the frustrations involved in helping American citizens. All of us have consular stories of being accused of wrong doing or not caring when the situation is often out of our control or American citizens are demanding we do things that are prohibited by law (but they don't generally know that, so they assume we simply choose not to help them.) It was refreshing to read both sides of the stories and hear the officer's point of view on the matter as well.

Because the FS is so small, it was interesting to read some personal anecdotes from officers I either knew or knew about. State Department employees or those familiar with the structure of the Foreign Service might find the first few chapters a little boring. Kralev does a good job of explaining how the department is structured, the process for getting into the service etc. It will be a review for some readers. However, forge on, because analysis and experiences really take up the last two thirds of the book and are worth the read.

Overall, I think this is a fair assessment of the service, and one of the best books I've read looking at contemporary diplomacy and the State Department. I would recommend it to anyone who wants to know what a foreign service officer does, to foreign service officers who are interested in how an outsider views our work, and to anyone interested in learning about the challenges and limitations of modern diplomacy. I wish every American citizen, and in particular every Congressman!!! read this book and understood the ideas presented by Mr. Kralev.

consulardude
5つ星のうち4.0 Very Good Background on the Foreign Service
2013年1月15日にアメリカ合衆国でレビュー済み
Amazonで購入
I have been in the Foreign Service for 20 years, and found this book to be a very good read. It isn't a sweeping, historical look at the Foreign Service, but it does provide an excellent introduction to the career, some good examples of the men and women who embark upon it, the challenges that we face, and the issues we deal with. Kralev's portrait is mostly a positive one -- he clearly respects the profession and admires the men and women of the Foreign Service, but he also does a good job of highlighting some of the areas of improvement needed. In writing his book, he interviewed a broad selection of Foreign Service officers from various levels and diverse backgrounds as well as several Secretaries of State. I enjoyed the book on Kindle so much that I also picked up a paperback copy when I went and heard Mr. Kralev speak. I especially recommend this book for anyone contemplating a career in the Foreign Service. You should also pick up "Inside a U.S. Embassy."
続きを読む
4人のお客様がこれが役に立ったと考えています
役に立った
フィードバックを送信中...
フィードバックをお寄せいただきありがとうございます。
申し訳ありませんが、お客様の投票の記録に失敗しました。もう一度試してください。
違反を報告
レビュー を日本語に翻訳する

Tyler Young
5つ星のうち5.0 Well worth the read
2017年2月12日にアメリカ合衆国でレビュー済み
Amazonで購入
Superbly well written and packed full of information - explicitly and implicitly. The book is well balanced between the fantastically exciting opportunities and shocking costs the Foreign Service involves. I highly recommend this for any prospective recruits or members of the public who want to know more about our army of diplomats abroad.
続きを読む
役に立った
フィードバックを送信中...
フィードバックをお寄せいただきありがとうございます。
申し訳ありませんが、お客様の投票の記録に失敗しました。もう一度試してください。
違反を報告
レビュー を日本語に翻訳する

Tyler B. Joyner
5つ星のうち5.0 A great book, for the right audience
2013年7月10日にアメリカ合衆国でレビュー済み
Amazonで購入
I would recommend this book to anyone considering joining or currently attempting to join the Foreign Service. By the time I broke down and shelled out the money for this book (a kindle version that's actually cheaper than the print version - hallelujah!), I had already read every FSO blog and scoured every forum I could find for more information to feed my foreign service obsession.

"America's Other Army" is chock full of interesting information and useful analysis that outsiders do not have easy access to. I particularly enjoyed the discussions of the different kinds of diplomacy and how that has changed the Foreign Service: e.g. the changes post 9/11 and the need for officers who can function in combat environments. Mr. Kralev does a good job in terms of revealing both the strengths and the areas for improvement in today's Foreign Service.

The only additional comment I would add is that this book is probably not all that accessible to people who are not already interested in the Foreign Service. Mr. Kralev has expressed that he intended this book to be a way for the American people to learn what it is exactly that America's diplomats do, but the material is sometimes a bit dry, particularly in the beginning. To me this book is perfect for students pursuing policy degrees, people considering joining the foreign service, and perhaps politicians who don't know as much as they should about what diplomats do. Not so much for the average Joe to consume after a long day at work.

H. Kenneth Hill
5つ星のうち5.0 Today's U.S. Foreign Service is America's Other Army
2012年11月10日にアメリカ合衆国でレビュー済み
Amazonで購入
As a successful foreign affairs journalist with The Washington Times and a stringer of the Financial Times, Nicholas Kralev became a member of the media pool that traveled with and became acquainted with Secretaries of State Albright, Powell, Rice, and Clinton. And he also frequently traveled on his own to many American embassies and consulates, establishing a wide range of contacts with Foreign Service Officers of all ranks from new consular officers up to ambassadors, engaged in a broad array of work assignments. This networking provided the research for his excellent new primer on the Service and American diplomacy in the 21st century. As a retired former Foreign Service Officer and retired ambassador, I recommend the book to anyone engaged in international affairs and business, education, journalism, and indeed for any Americans who want to understand how today's Foreign Service has in many places abroad come to resemble an army of diplomats confronting guerilla movements, terrorism, nation-building, and other dynamics of the post-9/11 world, in addition to their traditional tasks of political and economic reporting, consular work, and administration. However, readers will also learn that this "army" is not armed and occasionally is not adequately protected, as occurred recently, and tragically, in Benghazi, Libya.
続きを読む
4人のお客様がこれが役に立ったと考えています
役に立った
フィードバックを送信中...
フィードバックをお寄せいただきありがとうございます。
申し訳ありませんが、お客様の投票の記録に失敗しました。もう一度試してください。
違反を報告
レビュー を日本語に翻訳する

Frances Mae Snelling
5つ星のうち4.0 Interesting and very informative
2016年4月28日にアメリカ合衆国でレビュー済み
Amazonで購入
The author did an excellent job at maintaining objectivity while writing this book. The book seemed thoroughly researched and it is evident in the officers experiences he shared.