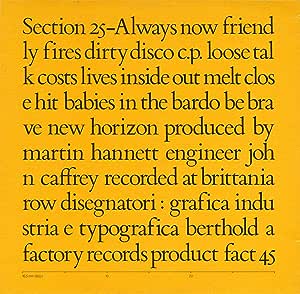 8. Babies in the Bardo

2. Babies in the Bardo

House of Wolves.
5つ星のうち5.0 Hidden Power.
2013年9月20日にアメリカ合衆国でレビュー済み
Amazonで購入
About a month and a half ago, I had watched a BBC documentary on Factory Records. The Cassidy brothers were being interviewed and honestly, I thought the way they conducted themselves was charming enough to look into their band: Section 25.

As every internet loser does (myself included), I looked them up on youtube to have a listen. The first song I heard was "Dirty Disco". I must have listened to that track seven times before moving onto "Friendly Fires" and doing the same for that song. I knew immediately that I NEEDED to own a copy of "Always Now" on LP. To my excitement, they still have the album in print.

The music is insanely psychedelic in a non traditional sense. Section 25 evoke the same kinds of heady wonder, paranoia, and hypnosis as say The Red Krayola, but with a lot less in the way of jam-packing albums full of every sound you could think of. On "Always Now", Section 25 are entirely minimal and it works to their advantage. The songs seem like the soundtrack to a ride along an endless plateau. The lyrics are far from brooding and poetry book scribbles. They seem to say just enough to have your imagination racing; meeting you half way. I personally love lyrics like that. At times "Always Now" had me thinking they have more in common with This Heat than Joy Division. I understand the argument otherwise, this is just a personal opinion. It has been raining heavily out here in the desert every weekend for a month or so now, and this record has been an excellent companion for those days.

As a fan of minimalist art, this record appeals to me unlike any other I can think of at the moment. It's a perfect album and a masterpiece in every regard.

I know I'm going to get some crap for saying this, but I believe Section 25's "Always Now" to be the best record released on Factory. I am a huge fan of Martin Hannett's production style, and it has never made more sense that it does here.

The artwork and packaging are top notch for this LP as well, so don't let that deter you from owning a rare gem such as this.

felipe echevarria
5つ星のうち5.0 Profound originality
2003年1月24日にアメリカ合衆国でレビュー済み
Amazonで購入
Well now, what to say, what to say...this has been one of my absolute favorites since it first released in 1981. Those fortunate enough to own the vinyl version were treated to one of the most exquisitely designed sleeves ever, with ornate marble printing elegantly hiding within a sturdy school bus yellow folding envelope. But it got even better from there. The music takes you on a journey, that, to me, rivals anything Joy Divsion or Crispy Ambulance ever embarked upon. Deeply interesting and very different, moody and hopeful, angry and serene, and then deeply interesting again. Included here on the import CD version you get 9 extra songs (numbers 11-19), which for me wreck the final mood that New Horizon leaves you with, but there are still a few fine works in the extra set, especially #'s 14, 15, and 16, which were produced in part by Joy Division's Ian Curtis. Section 25 is like an emergency flare you fire in desperation toward the black sky when you're stranded in a life raft. Play it loud, and float upstream into the fullness of the void.
続きを読む
10人のお客様がこれが役に立ったと考えています
役に立った
フィードバックを送信中...
フィードバックをお寄せいただきありがとうございます。
申し訳ありませんが、お客様の投票の記録に失敗しました。もう一度試してください。
違反を報告
レビュー を日本語に翻訳する

directions
5つ星のうち3.0 One of the Lesser Bands
2006年3月21日にアメリカ合衆国でレビュー済み
Amazonで購入
Out of the various Joy Division influenced bands that were around in the same scene, Section 25 were one of the lesser ones, that followed in the footsteps of their influences but did not stray from the path. The Sound and especially the Comsat Angels had a musical take that though not unique was still important and influential. Section 25 seemed to mimic the Joy Division sound a bit too closely, so that although they are not quite copying Joy Division (their sound is flat, dull and plodding whereas Joy Division's "She's Lost Control" has a nervous energy) they are too close for comfort. Anyway, if you've purchased Joy Division, Echo and the Bunnymen and the Teardrop Explodes and are looking for lesser known bands of the depressive but not goth post punk variety, that still are of significance, Section 25 has a certain following. Better yet fast forward to bands such as Interpol that took a fresh approach to this sound and reinvented it for a whole new audience.
続きを読む
7人のお客様がこれが役に立ったと考えています
役に立った
フィードバックを送信中...
フィードバックをお寄せいただきありがとうございます。
申し訳ありませんが、お客様の投票の記録に失敗しました。もう一度試してください。
違反を報告
レビュー を日本語に翻訳する

Steve Holtje
5つ星のうち4.0 Ah, the Eighties
2013年4月19日にアメリカ合衆国でレビュー済み
Amazonで購入
Section 25 was derivative as hell; they were friends with Joy Division, and it sure does show on this, their first album (plus additional material from around the same time. (Later they'd make the same style switch as New Order.) But if you like that sound -- and, let's face it, we sadly did not get enough Joy Division, for the obvious reason -- you'll like this, slightly less.
続きを読む
2人のお客様がこれが役に立ったと考えています
役に立った
フィードバックを送信中...
フィードバックをお寄せいただきありがとうございます。
申し訳ありませんが、お客様の投票の記録に失敗しました。もう一度試してください。
違反を報告
レビュー を日本語に翻訳する