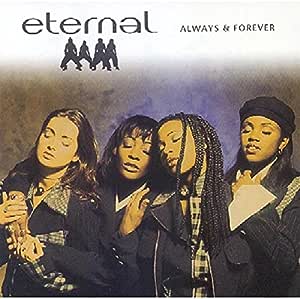 The debut album from this female South London quartet, as was, is most notable for containing the thumping, inspirational "Just A Step From Heaven", a genuine R&B classic and powerful both as a love song and an implicit political statement. It was the song which announced Eternal as a musical force to be reckoned with, and despite the high standard of the their subsequent work, it remains their finest five minutes. The rest of Always And Forever sounds closer to the band's later successes: tight uptempo booty-shakers ("Stay", "Crazy") alternated with smoothly produced, mawkish ballads ("Oh Baby I...", "Don't Say Goodbye"). It all makes for pleasant listening, but suffers by comparison to that one extraordinary moment. --David Bennun

typical early 90s flavour their style changed slightly after this album but as guess all r&b/new jack did with the times, love the majority of this album I don't like the fake American accents on my favourite track sweet funky thing but other than that I great cd.
続きを読む
違反を報告
レビュー を日本語に翻訳する

Becca
5つ星のうち1.0 Becareful not buying new because or scratches
2021年2月16日に英国でレビュー済み
Amazonで購入
Brought it not new and its scratch was expecting some but not that you can listen to 1 of the song
続きを読む
違反を報告
レビュー を日本語に翻訳する

Hans
5つ星のうち5.0 A great album from Eternal
2012年12月25日に英国でレビュー済み
Amazonで購入
I love this music, its a mix of soul and pop - the new Three Degrees. Many great songs on this album. Superb sound.
続きを読む
違反を報告
レビュー を日本語に翻訳する