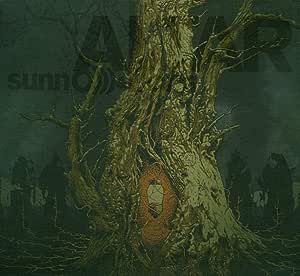 By now both Southern Lord recording artists Boris and sunn 0))) should be no strangers to this universe. Boris has previously released 4 full length albums through Southern Lord (Absolutego, Amplifier Worship, Akuma No Uta and Pink) and sunn 0))) has released 5 full-length albums with the Lord: (Flight of the Behemoth, the Grimm Robe Demos, White1, White2, and Black One). We've all watched both bands go from obscure, heavy expermentalists, followed by a very small cult audience, to succesfully renowned artists appealing to a very eclectic, large audience. The Altar album is NOT a split album. Altar is a collaboration album between the two groups that is a result of both bands conceptualizing, writing and recording the album together as one entity. Both groups have stepped outside their previous sounds and created a wholly unique album that stands on its own unique ground. There are elements of each groups trademark sound within the album but true to each groups progressive and experimental aspects, Altar moves into a completely new dimension.

Cosmic Fuzz
5つ星のうち5.0 Wicked Album
2014年5月13日にアメリカ合衆国でレビュー済み
Amazonで購入
Let me start by saying that I am very open-minded musically speaking. I enjoy a lot of experimental music that most people would probably not care for.
Having said that..... This is an incredible album. I wasn't really sure what to expect going in. Sunn O))) and Boris are both great bands. However, sonically and/or musically speaking, I wouldn't say that they were bands that have a lot in common or that you would expect to come together on one album. As it turns out..... The essence of both bands comes together quite nicely. A couple of songs lean more towards Sunn O))) and a couple more towards Boris. The rest blend together quite magically. The end result being a great, great album. You know you want it! Don't deny yourself a minute longer.
続きを読む
2人のお客様がこれが役に立ったと考えています
違反を報告
レビュー を日本語に翻訳する

Surferofromantica
5つ星のうち2.0 Does not live up to its promise
2008年12月26日にアメリカ合衆国でレビュー済み
Amazonで購入
Boris and Sunn0))) are two bands - the former is from Tokyo, the latter is from the USA - and they both play unconventional heavy music. They have toured for a while together, hence this collaboration. Sunn0))) typically presents a mass of heavy bass sounds, without percussion or keyboards or vocalists, while Boris is like Blue Cheer turned up to 11 (they also have their experimental albums where anything goes). The standout track for me on this CD is the opener, "Etna," which is gloomy Sabbath-like dirge stuff that picks up into a very Boris-like blues metal screecher. Until the guitars pick up, nearly half of the song is Atsou's drum avalanche. Play it next Hallowe'en at top volume.

The rest of the album is experimental and rather... odd. "N.L.T." is percussive, "the Sinking Belle" is a sweet song that seems to have gotten mislaid from the Twin Peaks soundtrack. "Akuma no Kuma" (Boris have a song called "Akuma no uta" which means "Satan's Song," while "Akuma no Kuma" means "Satan's Bear") is a bunch of drum and synth noise while Joe Preston (well known from Boris and Thrones) makes noise on a vocorder. Bizarre stuff. "Fried Eagle Mind" is a rare song that has Boris guitarist Wata on vocals. She sounds also very David Lynch sorta, so... "Blood Swam" is very much like typical Sunn0))) (and Boris on some of their releases) which drones on for nearly 15 minutes, the longest track on the album.
続きを読む
6人のお客様がこれが役に立ったと考えています
違反を報告
レビュー を日本語に翻訳する