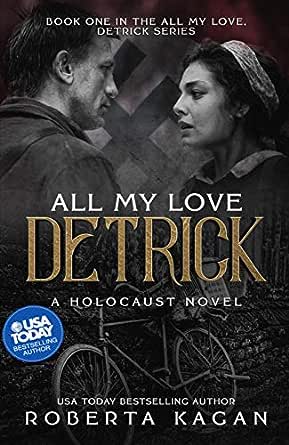 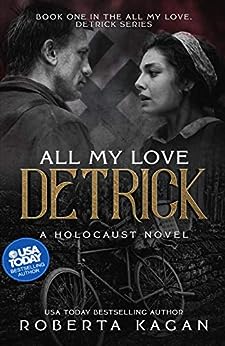 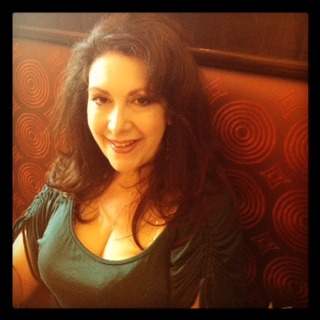 All My Love, Detrick: A Historical Novel Of Love And Survival During The Holocaust (All My Love Detrick Book 1) (English Edition) Kindle版 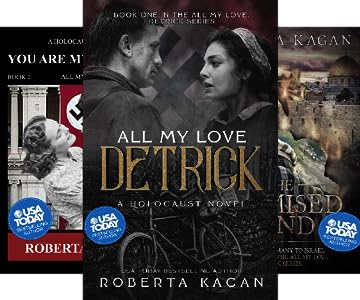 Book One in the All My Love, Detrick Series
Can Forbidden Love Survive in Nazi Germany?
After Germany’s defeat in the First World War, she lays in ruins, falling beneath the wheel of depression and famine. And so, with a promise of restoring Germany to her rightful place as a world power, Adolf Hitler begins to rise.
Detrick, a handsome seventeen-year-old Aryan boy is reluctant to join the Nazi party because of his friendship with Jacob, who is Jewish and has been like a father figure to him. However he learns that in order to protect the woman he loves, Jacob’s daughter, he must abandon all his principles and join the Nazis. He knows the only way to survive is to live a double life. Detrick is confronted with fear every day; if he is discovered, he and those he loves will come face to face with the ultimate cruelty of the Third Reich.
Follow two families, one Jewish and one German, as they are thrust into a world of danger on the eve of the Nazis rise to power.

Lisa T
5つ星のうち3.0 3.5 Star Rating
2017年3月14日 - (Amazon.com)
Amazonで購入
Jacob Abdenstern helps out a young Detrick when his bicycle is damaged in an accident. This was the beginning of a friendship that would last a lifetime. Unfortunately, as the years progress, Detrick finds himself in a very difficult and dangerous situation. Not only is he friends with Jacob, Detrick falls in love with Jacob's daughter. Why the danger? Detrick is German and Hitler and the Nazi's are now in charge.

This is a difficult book to review because I have both pros and cons.

Pros:
-I like the topic of a WWII setting in a novel.
-I really liked the main characters of Detrick and Jacob Abdenstern and the father/son type relationship that they formed especially when Detrick's own father fell short in many ways.
-I admired Detrick for standing up for what he believes in no matter the cost.
-Overall, the story line held my interest and there were a few surprises.

Cons:
-I found myself scrolling back and forth and rereading sections because the chronology seemed off in parts.
-There were some awkward sentences and misspellings that made certain parts a bit tedious to read. I usually don't comment on grammar/spelling errors unless it impacts the story, and unfortunately it did in parts of this book.
-Some of the historical facts were not accurate.

M. Hughes
5つ星のうち1.0 At Least It Was Free (Definitely Contains Spoilers)
2016年4月16日 - (Amazon.com)
Amazonで購入
I wish I could say good things about this book. I read the author's blurb and I believe she means well. But she can't write. Nor did she do any real research. Talking to Holocaust survivors may make for authenticity in some places, but to say in the 1923 prologue that Berlin was alive with the smells of fresh-baked bread and cookies is just plain wrong. After WWI, Germany was hit for war reparations and bankrupt. In 1923 they printed more money in an attempt to solve the problem, but that only created rampant inflation. It took a wheelbarrow full of deutschmarks to buy a loaf of bread, and most of the stuff being cooked was ersatz.The German nation was crippled by poverty pretty much until Hitler took over and revitalized manufacturing (no, I'm not a Nazi) and building. Also in the prologue she refers to a woman's husband surviving the war but coming back haunted, etc. etc., and then their son was born. Now in order to survive the entire war, he would have come back in 1918. But the boy Detrick is turning 7 in 1923, meaning he was born in 1916. Ummm...??

Chapter titles read like a children's book, spoiling each chapter, such as these: "Karl Learns a Trade," "Tony is Shot," or "Inga Tells Detrick Her Plan." Each chapter seems to begin and/or end with segments that feel as if they were copied from a low-quality encyclopedia. The chapter entitled "Hitler Becomes Führer" begins thus: "Late one night in the early summer of 1934, Hitler, accompanied by his two closest friends, Goering and Himmler carried out a treasonous plan. They murdered all of the opposing leadership within their political party. This sinister event would go down in history as the Night of the Long Knives. At the beginning of August of the same year, President Von Hindenburg of Germany died. Hitler became the Führer." It's like a list of bullet points in a presentation, not writing prose meant to transplant the reader into the story, drench the reader with atmosphere, or anything at all except provide a superficial sense of time and place. However, any sense of time and place provided will eventually be destroyed by the writing later on. Like the mixture of verb tenses in this weird passage: "On November 9th, as Detrick had been nursing his mother, a black mark had been stamped on the calendar of history. It will be remembered forever in the hearts and minds of those who lived through it." Kagan likes to end chapters this way; it's as if she read somewhere that a chapter should end on a cliffhanger, only she wasn't sure how to write a cliffhanger.

The characters could have been interesting, but they are given a list of physical attributes straight from the cookie-cutter, and their values and beliefs are unevenly defined. The evil people are a lot more interesting that the decent people. For example Eric (I would have thought a German would spell it Erik or Erich, but whatever), the SS fellow who seduces Helga, is given complete motivations and an interesting subtext. He's also written out of the book early on with no accounting for his disappearance. His only function seems to be to impregnate the character Helga and to contribute this extraordinarily bad passage: "If Eric had been clairvoyant, he might have seen what was to come. He might have known that, in the future, when his son had just barely become a man, because of Hitler’s ambitions, Ziggy would lay dying in the arms of a beautiful Jewish partisan far from his family somewhere just across the Russian border. But of course, he could not see that. He saw only as far as a single tomorrow." And Helga herself might have had some impact, but it seems her whole function was to tell us how evil the Lebensborn program was (and to lead into the next book...dear Lord, I trembled at the thought of another book. I disliked the first one enough, and it was free; I will hardly pay for a sequel.) The character Miriam is never well-defined to begin with, but her suicide might have still had some emotional impact if only it hadn't been accompanied by such Wagnerian histrionics as to make it funny. But the bad writing makes a lot of things funny that I'm certain the author didn't intend: "He’d been so caught up and lost in thoughts of her that he did not notice that the Gestapo had arrived until they busted through the door." Egad. Worst of all was the description of a boy stabbed in the throat with a piece of glass: "The dying boy, turned just thirteen a week prior, found it difficult to breathe as he choked on the blood that ran down his throat." He found it difficult to breathe? Really?

The plot was predictable, but it wouldn't have been so bad if only the writing were better. There are incomplete sentences that serve no purpose. Bad grammar abounds (a dictionary would've helped with the difference between lay, laid, and lie). Maybe the author is ESL; I don't know, but someone should have caught this stuff. Punctuation is variable, and a few sentences that leave the reader scratching her head emerge: "If he ran through the gate the metal bar, decapitate both of them."

I have a real love of history and a love of storytelling, and I believe Kagan's stated goals about telling people of the Holocaust are good. I just wish she could write better. Or get a ghost-writer. Or at least take a writing class. I remember once reading that a mediocre story, well-written, would be a hit, but a great story, badly written, would be a train wreck. This book is a train wreck, and I'm sorry for that. But at least I got it on a promo, so it was free.
続きを読む
51人のお客様がこれが役に立ったと考えています
レビュー を日本語に翻訳する

Booklover/ Leah C
5つ星のうち5.0 Great read
2016年2月12日 - (Amazon.com)
Amazonで購入
I really enjoyed this book. It is t the usual WWII book which I might add I read a lot of. This book is from the viewpoint of a German " aryan" man, blond blue eyed Detrick is popular but has a poor home life, his father is a drunk mean man who came back from WWI with no interest in his baby boy. His mother loves him and his sister and tries to make up for it. As Hitler comes to power we see how Detrick doesn't fall for all the b.s. That his friends and father do, his sister does too. He ends up meeting a Jewish man after crashing his new old bike and Jacob fixes it for him and gives him a job. Years later he meets and falls in love with Jacobs daughter Leah, a Jew. As the laws change to not allow Jews to do anything, pretty much Detrick sees how wrong Hitler is and his friends who joined the "party". He works hard to keep them alive, and safe. I won't go into more detains as it will spoil the book, but it is a really good read. I look foward to reading the next two in the series, even though I don't think they are really connected to this one. I do recommend this book to anyone who likes to read about the time era, it brings a bit of a differant perspective to the story than a lot of the books.
続きを読む
15人のお客様がこれが役に立ったと考えています
レビュー を日本語に翻訳する
Amazon.comのカスタマーレビューを見る(1,292) 5つ星のうち4.4
click to open popover
Amazonプライム会員ならお急ぎ便、日時指定便が使い放題
さらに、映画もTV番組も見放題。200万曲が聴き放題 。クラウドに好きなだけ写真も保存可能。
> プライムを無料で試す