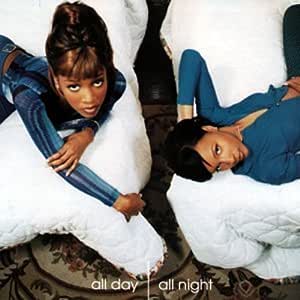 All Day All Night

Cassandra Lucas and Charisse Rose are the class faces behind the 2nd album from Big Beat's Changing Faces. The duo's 1994 gold self-titled label debut entered the R&B chart at #1, while making it's mark on the pop chart. On All Day, All Night, the singer/songwriters are again joined by R. Kelly, who wrote, produced and performed on the tracks "G.H.E.T.T.O.U.T." and the title cut. Highlighted by a sweet-but-street-savvy vibe, these songs offer an intelligent female perspective on the relationship rollercoaster.

Flaunting a newly developed carnal side, Charisse Rose and Cassandra Lucas slink up to the material on their second album, All Day, All Night, like a pair of tigers on the prowl. Each tune is punctuated by luxurious harmonies and seductive vocal tricks. The title track features their voices weaving in and out of the laidback groove as they toss out tantalizing lines like "I need a man who's going to do me right." The hip-hop driven "All Of My Days," which features Jay-Z, finds the New York girls grounding the song with their natural licks. And even the varying production work of mega-producers R. Kelly and Bryce Wilson, amongst others, fails to throw Changing Faces for a loop. The group moves easily through the diverse textures of each track, keeping it a consistently intimate affair. --Aidin Vaziri