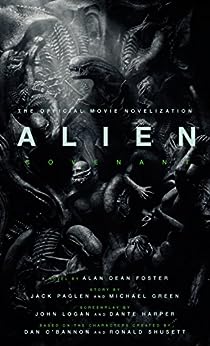 “a solid sci-fi adventure novel...If you’re a fan of Foster’s previous Alien novels - or his work in general - it’s definitely worth a read.“ - Den of Geek


“Flip off your internal real-world logic switch and I think you’ll enjoy the ride” vgblogger.com --このテキストは、kindle_edition版に関連付けられています。

Cass
5つ星のうち4.0 Fleshing out the Alien
2017年6月13日に英国でレビュー済み
Amazonで購入
I read this book having seen the movie and thought the book may give more insight into the Universe that Ridley Scott is creating. In this respect the book brings together the world of Prometheus,,and the grey transforming liquid and links to the original Alien creature. It also gives much more clarity to the role of the crew members of the space ship Covenant,,, something l felt was missing from the movie . Indeed Alan Dean Foster,, adds a few lines missing from the movie that,,, fill many of the so called plot holes of the movie,,, you hardly notice them but they give the reader much more insight into the crews decision making than the movie did . Like the movie the book has a slow start,,, but really gets going and races to the finish. A good page turner with a dark destructive heart,, ,,organic life meets it's chilling bloody end,,,,,,,maybe. Alan Dean Foster 's writing style suits the science fiction horror genre very well,,,he keeps the book tight like the movie .I remember reading some of his earlier works in 1978 and 79 before my teens,,,the original Alien book being one of them .
続きを読む
21人のお客様がこれが役に立ったと考えています
違反を報告
レビュー を日本語に翻訳する

Dharmananda
5つ星のうち4.0 Great addition to the Alien franchise
2017年7月13日に英国でレビュー済み
Amazonで購入
Back when I was a kid, I loved movie novelizations.

They used to come out before the movies were released so the novelization was like an advance screening, if you like. I picked up a lot of them over the years— Indiana Jones and The Last Crusade, Licence to Kill, Alien 3 etc. And what I really liked about them, particularly Alien 3 by Alan Dean Foster, was how you were often given something extra, something that was absent from the movies— a cut scene here or there, some clues as to what a character might have been thinking, what motivated them to do whatever it was they did. In that sense, then, the novelization was like the director’s cut of the movie and, for me at least, often a better way to experience the story.

I haven’t seen Alien: Covenant yet. I guess I’m waiting for the DVD release, figuring it’s one I’d prefer to experience in the comfort of my own home as opposed to on the big screen. Maybe I’m just getting old or maybe it’s the fact that a visit to the cinema these days would set you back more than I would happily pay (yep, definitely getting old!). That said, I feel like I’ve seen the movie because I’ve read the novelization: written by the always on-form Alan Dean Foster, it’s like the damn thing was playing in my head.

First of all, I think it’s important to say that this story is not a direct sequel to the Alien series. What I mean by that is that it doesn’t come after Alien Resurrection, either chronologically or thematically — it’s a very different beast to that. No, this movie is a direct sequel to Ridley Scott’s Prometheus which is something of an origin story to Scott’s very first movie within this world, 1979’s Alien. In that sense, then, Alien: Covenant continues this prequel series, not only making reference to the characters of Prometheus but actually picking up on their storyline.

The story is set ten years after the events of Prometheus. We follow the crew of a new ship, Covenant, sent by the ever-sinister Company (aka Weyland-Yutani) to colonise a distant world. The crew themselves are comprised of couples, each with their own skillsets: our principal heroine, Daniels — a character perhaps a little too similar to Ellen Ripley for comfort — is in charge of terraforming, for example. After being woken rather abruptly from hypersleep — a scene that, at least in the book, played out very effectively — they find themselves close to a different planet to the one they were originally destined for, and collectively decide to at least visit it. This, of course, turns out to be a mistake.

To take the story much further than this would be quite spoilerific and I want to avoid that in this review. For me, a lot of this story’s punch lies in going in with fresh eyes and no expectations at all. Safe to say, the xenomorphs make an appearance, at first on the planet, and then later within the ship. In some ways, then, you could be forgiven for thinking that this story is a retread of some of the earlier movies within the series — Scott’s original movie as well as James Cameron’s Aliens and even the less popular Alien 3— and that would be true, particularly with regards to the action scenes. But what that doesn’t account for is the fact that there isn’t a lot of action in this story per se — at least not within the book. It’s much more of a philosophical piece, and, in that sense, I feel, borrows just as much, thematically, from Scott’s Blade Runner as it does from the Alien franchise.

I enjoyed this book and very much look forward to the movie. For me, it is a wonderful enrichment of the Alien universe, addressing many of the questions fans have been pondering for years as well as introducing a few new ones. For the casual reader/ viewer, the pace might prove a little on the slow side, the action scenes — and even many of the characters within them — bringing little new or fresh to the table. But for me, this is a worthy addition to the series and a great bridge between the world of Prometheus and the world of Alien.

John Doe
5つ星のうち3.0 Disappointing.
2020年1月9日に英国でレビュー済み
Amazonで購入
If you are a fan of the original Aliens trilogy, then you'll find some familiarity in the story: Spaceship (Nostromo in Alien, USS Sulaco in Aliens), Planet (LV426 in Alien and Aliens and Fiorina "Fury" 161 in Alien 3), Aliens (All three), Unfriendly Android/Synthetic (Ash in Alien), Friendly Android/Synthetic (Bishop in Aliens), Mechanical Weapon, (Loader in Aliens), Ejection into Space (Alien and Aliens), and finally Female Heroine (Ripley in, yup, all three).
The Alien franchise was based around Ellen Ripley much in the same way that the Terminator franchise was based around Sarah Conor and once those characters had run their course that should have been that. Instead there's a serious Police Academy infection here. It doesn't know when it's time to call it a day.
It's not that it's a bad story, just that it's been told before and better. If you are a big fan of the first three films, don't bother as you'll be sorely disappointed.
続きを読む
1人のお客様がこれが役に立ったと考えています
違反を報告
レビュー を日本語に翻訳する

Nye (age 6)
5つ星のうち5.0 An unmissable addition to the movie
2017年6月21日に英国でレビュー済み
Amazonで購入
An excellent rendering of the story with enormous numbers of additions and plot points that make the movie far more understandable and leave me wishing the final cut had been THIS movie and not the thinned down supposedly 'more palatable' version in theatres. Worth reading before and after seeing the movie.... from experience.
続きを読む
4人のお客様がこれが役に立ったと考えています
違反を報告
レビュー を日本語に翻訳する

simon r
5つ星のうち4.0 What it says on the tin.
2017年7月22日に英国でレビュー済み
Amazonで購入
I bought this n the hope it would expand on some questions raised in the film. It does explain Davids motivation but frustratingly, denies a major conceit of the film, as in 'who created the Alien'? You can, however, put together a reason the Nostromo crew found eggs not urns on their engineers ship, even if this is a. A little lack lustre and b. Not fully explained. It is these issues that prevented me giving a 5 stars.
続きを読む
違反を報告
レビュー を日本語に翻訳する
すべてのレビューを参照します
トップへ戻る
Amazonについて
Amazonでビジネス
Amazonでのお支払い
ヘルプ＆ガイド
日本語ショッピングのための言語を選択します。 日本ショッピングのための国/地域を選択します。
© 1996-2020, Amazon.com, Inc. or its affiliates