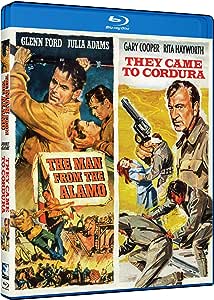 The Man From the Alamo / They Came to Cordura [Blu-ray]

John Fowler
5つ星のうち5.0 TWO BLU-RAYS FOR LESS THAN THE PRICE OF ONE
2020年5月17日にアメリカ合衆国でレビュー済み
Amazonで購入
Two pretty good westerns in a two disc Blu-ray package.
NOT (as I first thought) two films on one Blu-ray, though that would have been feasible.
Current cost is $12.99 which works out to $6.50 per Blu-ray.
The label is Mill Creek Entertainment, which used to have a pretty dodgy reputation, but they have cleaned up their act.
Both films were issued on DVD a few years ago by Universal and Columbia (see photos).
Mill Creek simply licensed the earlier DVD transfers.
Though the transfers are identical, they look better on Blu-ray because you can make out more detail.
Interesting contrast between Technicolor (‘Man from the Alamo’) and the cheaper Eastmancolor process (‘They came to Cordura’).
The rich colors of Technicolor look pretty much the same as they did in 1953, but Eastmancolor (1959) has faded.
Both films have English SDH subtitles. No extra features.

‘The Man from the Alamo’ (1953) is a traditional Hollywood Western, presented in the standard 1.37 to 1 Academy ratio. Mono sound.
Glenn Ford is branded as a coward for leaving the Alamo. But he is misunderstood.

‘They Came to Cordura’ (1959) is a revisionist Western, presented in Cinemascope (2.35 to 1). Stereo sound.
Gary Cooper is branded as a coward. But he really is a coward.
(not what audiences expected from Gary Cooper).

‘They Came to Cordura’ is the more interesting film of the two.
Directed by Robert Rossen, who was better known as a screenwriter - 28 writer credits, 10 director credits (source: IMDB)
Not only a revisionist western, it is also an anti-military film.
This cynical view of the military was commonplace in Hollywood during the Vietnam War era, but ‘They Came to Cordura’ (1959) was a product of the peacetime Eisenhower era.
Ten years ahead of it’s time.
The film is set in 1916, when President Wilson sent the US Cavalry into Mexico to hunt down Pancho Villa, just before the cavalry traded in their horses for tanks.
It opens with “the last cavalry charge in US Army history” which Gary Cooper realizes is a totally unnecessary public relations stunt.
Major Cooper is assigned to monitor the battle and choose five likely candidates for the Congressional Medal of Honor, which is another publicity stunt to prepare the American people for entry into World War I.
1916 may sound kind of late for a Western, but except for the cavalry wearing olive drab in place of their traditional blue uniform, there is nothing to date this picture (no motorized vehicles in sight).
This was Gary Cooper’s last Western - he only made two additional non-westerns before his death in 1961.
Cooper’s last truly great western was the previous year’s ‘Man of the West’ (1958) directed by Anthony Mann.*

* ‘Man of the West’ is available on a US region A Blu-ray from Kino, but I recommend that you order the UK region B Eureka “Masters of Cinema” Dual Format Edition (DVD & Blu-Ray) - Much better.
You will need a “region-free blu-ray player” (they are now sold on Amazon).
In the meantime, you can view the UK DVD (but not the UK Blu-ray) on your computer's DVD drive.