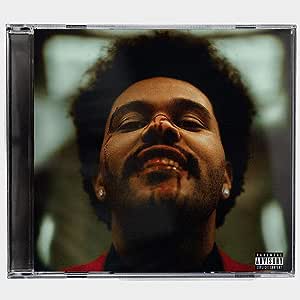 Nikki P-S
5つ星のうち5.0 Love it - deffo buy and enjoy.
2020年4月5日に英国でレビュー済み
形式: CDAmazonで購入
Love it love it love it.
Great album deffo worth the wait and Thank God it came out when it did. Just what you need at this awful time. A good bit of music to listen to. Plenty of good music is needed to keep us goin. Stay safe people stay at home and put some good music on. Get this album and enjoy.

hannah rose childs
5つ星のうち3.0 No track list
2020年3月26日に英国でレビュー済み
形式: CDAmazonで購入
Love The Weeknd, but the album cover isnt great, also why is there no track listing on the back of the case? I had to recheck images to make sure I hadnt purchased a copy that wasnt legit.
Love some of the songs but disappointed with this album to be honest.

Natalie Cardoza
5つ星のうち5.0 I love this album!
2020年3月25日にアメリカ合衆国でレビュー済み
形式: CDAmazonで購入
I really enjoyed this album very much, I noticed less curse words and less ego in The Weeknd’s songs on this album. Very emotional songs, I can feel his emotions through his music. You will probably have to listen to this album one more time before you fall in love with it and that is because it’s different from what his other songs sound like. It’s got that 70s & 80s vibe, beats got that stranger things vibe. I did notice all the songs sound similar and talk and the same thing but give this a chance I think this album will grow on you. My favorite songs are alone again and snowchild.
続きを読む
5人のお客様がこれが役に立ったと考えています
役に立った
フィードバックを送信中...
フィードバックをお寄せいただきありがとうございます。
申し訳ありませんが、お客様の投票の記録に失敗しました。もう一度試してください。
違反を報告
レビュー を日本語に翻訳する

Shopper
5つ星のうち4.0 If You Are Buying a Physical CD for Liner Notes, There are no Liner Notes
2020年3月25日にアメリカ合衆国でレビュー済み
形式: CDAmazonで購入
So I bought this the night it came out, and for albums by certain artists I will still buy physical copies of the discs to read through the liner notes, check for lyrics, etc. Yes, I'm also a person that watches the director's commentary on movies I like. Don't judge me. So if you're wondering what you might get on top of the music (which is very good, by the way) with the actual disc, the answer is not much by what I can see in the packaging. You get 10 pages of dark photographs that are all variants on the face photo on the cover. If you like CDs, and still use a CD player, you get a CD. I've been playing the album since I made the purchase on Amazon (hooray for Autorip), so I will mention the CD will just be sitting in the case not being played. Maybe there is an Easter Egg sitting there for someone who actually spins the disc. That will be for someone else to figure out.

If you are a fan of the Weeknd's music, you've probably already read this is not a return to his early day sound. It's also not the Beauty Behind the Madness, my personal favorite album of his. I'm actually a big fan of 80's music, so Blinding Lights got played for a few days straight when I heard it. Think about a mashup of Mike + the Mechanics and Michael Jackson, and it's as awesome as it sounds. My favorite track on the first few plays is surprisingly not that, though. I've been playing Escape from LA more. But the album sets itself up for many interpretations, and other songs will catch attention on repeated listens. It's not an "in your face" experience. Compared to his other work After Hours may require a little more patience. I listened to the title track three times before I decided I liked it.

To this listener Starboy as an album was a disaster beyond the lead single, and I didn't pick up the follow on EP. The artist's sound is still evolving, but the mood of After Hours seems like more of a natural successor to his 2015 breakthrough.